Millennials may be a bit obsessed with self-care — and it’s beginning to pay off for the makers of self-care and digital wellness apps. According to data from multiple app store intelligence firms, the category is now seeing notable growth. In the first quarter of 2018, the top 10 grossing self-care apps in the U.S. earned $15 million in combined iOS and Android revenue, and $27 million in worldwide revenue, according to Sensor Tower. 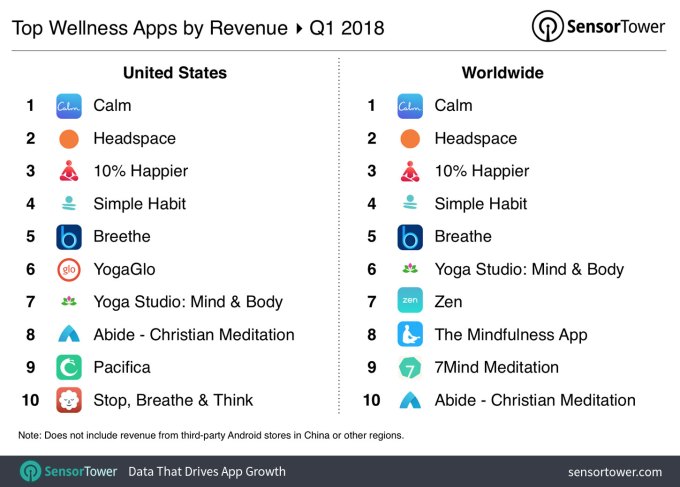 However, a big chunk of self-care apps’ revenue is being claimed by just two apps — Calm and Headspace, both of which focus on mindfulness and meditation. Calm, the top grosser, earned about half the total revenue in the U.S. and worldwide, equating to roughly $8 million in the U.S. and $13.5 million worldwide. Combined with Headspace, the two generated more than 90 percent of the top 10 apps’ revenue last quarter.

Apptopia is also reporting a surge in self-care app revenues and installs, but its numbers don’t agree with Sensor Tower data.

Both firms agreed on the top three, however: Calm, followed by Headspace, then 10% Happier: Meditation Daily. Other mindfulness apps appeared on both charts, including The Mindfulness App and Stop, Breathe & Think.

The discrepancies may be attributed to how the companies define “self-care” — as it’s not a specific app store category — as well as data quality.

Regardless of which firm is closer to actual, the trend is clear: self-care app adoption is booming. 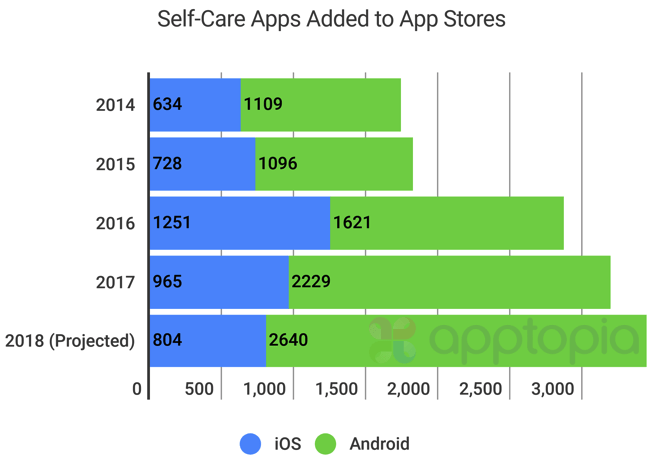 Apple, for example, pegged self-care as one of its top four breakout trends for 2017, saying “never before have we seen such a surge in apps focused specifically on mental health, mindfulness and stress reduction.”

As to why self-care apps are the latest craze, that’s a bit more complicated.

Some experts say millennials’ use of the informational resources on the internet increased awareness about self-care in general; others would say the always-on news cycle of the web combined with the depressing nature of social media led to a growing need for self-care tools. And, of course, cynics would argue it’s simply because millennials are more self-absorbed than other generations, and this trendy focus on self-care is the proof.

But there are plenty of other factors beyond that. Millennials married later and were slower to buy homes as a result — that may have led them to have more time to remained self-focused, as they may not have had the same set of distracting responsibilities as their parents. (Or the related drains on their extraneous funds!)

Meanwhile, the stigma around mental illness is also on the decline, which aids a self-care app surge.

However, not all self-care apps are a replacement for traditional mental health care, when it comes to more serious matters. Some of the talk therapy apps were found to be ineffective, expensive, inconsistent in the quality of care provided and, at worst, potentially dangerous.

For those problems that can’t be meditated away, please still call a doctor or an emergency hotline.