WhatsApp, the popular messaging app owned by Facebook, has faced a lot of controversy over the role that Groups plays on the platform — both for Groups’ role in spreading spam, misinformation or worse, and for the fact that it can be very hard (actually impossible) to control when you are added, except by blocking a specific contact altogether.

Now, it seems that the company is finally starting to make some moves to change this. This morning, the company announced that it would start to roll out an update globally so that individuals can either block some or all people to keep them from adding them to Groups.

As per an update that should be making its way to you soon, you can now navigate to the privacy settings in the app to select who (if anyone) can add you to a Group, automatically. If you select anything other than “everyone” enabled to add you to groups, you will get notifications asking if you want to join first. (Picture here from WhatsApp’s blog post as it has not rolled out to me yet in London.)

Note: The feature still requires users to proactively navigate to their settings to turn it on. It doesn’t get turned on by default. You also still can’t block a group wholesale.

Some background and clarification here. You might recall that WhatsApp actually announced a version of this feature back in April that was more rudimentary: you could select Nobody, Everybody or Contacts (but not specific contacts) to add you to Groups. At the time, WhatsApp noted that the control would be rolled out worldwide. It turns out it never did: India was as far as it got.

(Indeed, the feature was launched just after it was revealed that Groups were being manipulated in India to influence political opinion, with hundreds of hoaxes being spread on the platform daily using Groups as the medium. That was giving WhatsApp bad press, and so the feature felt like an immediate response to that.)

Instead, WhatsApp quietly stopped talking about it, and people seemed to forget (Twitter and other social media has turned us into goldfish, slaves to the scroll).

Fast-forward to today, and now it seems that WhatsApp is renewing but also committing to getting this out. A spokesperson confirmed to me today that, this time, Groups control really will be coming to all users on both iOS and Android, worldwide.

“Based on feedback from users during our initial rollout, instead of the ‘Nobody’ option we are now providing a ‘My Contacts Except’ option,” WhatsApp notes in its blog post update today. “This allows you to choose to exclude specific contacts or ‘select all’. This update is rolling out to users around the world on the latest version of WhatsApp.”

WhatsApp dragging its feet here is not unusual. The app is not famous for making changes quickly: It took almost a year — actually, two years — for WhatsApp to really start to get down to business with services for businesses. And there are a number of other examples of how the company does not roll out features with speed (or haste). We’ve long heard rumors about how the company had an interest in rolling out money transfer and payment services for consumers. These have yet to materialize.

So what comes next? Hopefully, WhatsApp will make one further change, and that is to set Groups to a with-permission-only setting by default.

If you have to dig into the settings to change an action — which you will have to do with this update if you are added by someone who is in your contacts (however, if you’re added by a non-contact you get the prompt below) — then it’s not on by default. As with Facebook’s privacy settings, this essentially means that many could miss the ability to set their own boundaries. 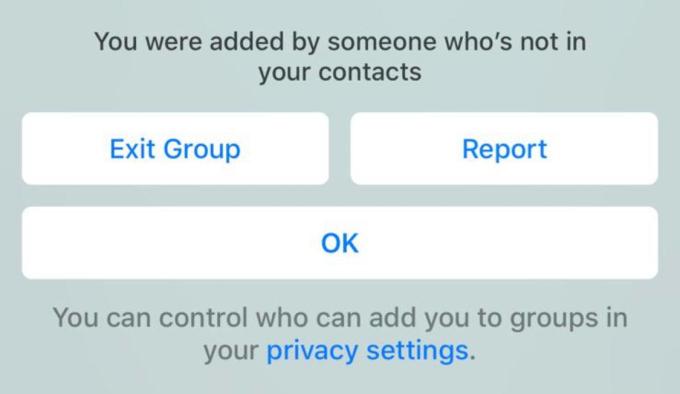 Adding better controls for Groups might not sound like a huge feature to you until you’ve been at the coalface of the Groups morass.

At its lightest or most innocuous, you are being added by tangential work contacts to annoying business chats, or groups of over-chatty folks coalesced around a particular interest. A nuisance, but not really the end of the world.

But at its darkest, people can get harassed, fake news can be spread and you might get slammed with an offensive, shocking, disturbing image or two (or three). Given that the app is used by minors (as young as 13 in some markets, although I suspect many younger than this use it), other vulnerable people, and billions of others, Groups on WhatsApp need way better basic controls, usable by more than just those who read change-logs on app updates, or tech blogs.

Updated with screenshot of prompt to exit or report a Group.