WhatsApp is finally adding stickers to its hugely popular messaging app. The company said today that support for stickers will roll out to Android and iOS users over “the coming weeks.”

Initially, the app’s 1.5 billion users will have a seemingly limited selection with the first packs provided by WhatsApp’s own design team and some “other artists” chosen by the company.

However, that’s likely to change in the future since WhatsApp will allow anyone to add stickers that can be used inside the app.

It’s taking an interesting route to enabling that. Would-be sticker artists will need to publish their packs as an app on the Google Play or Apple App Store. From there, users can download the apps and then make use of the packs inside WhatsApp. The company has provided a template that it claims requires “minimal development or coding experience.”

A full guide on the sticker submission process can be found here. 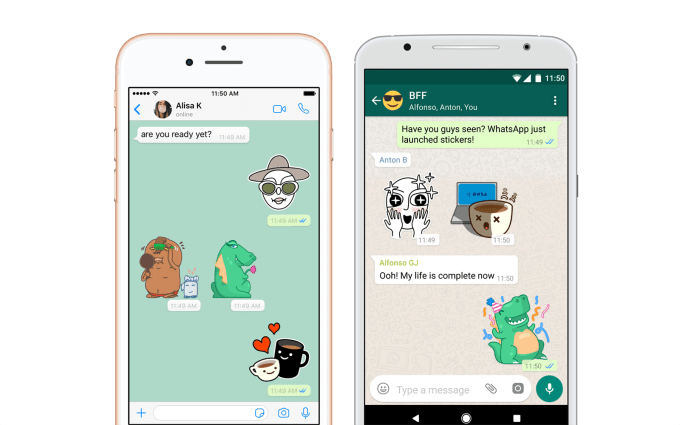 Other messaging apps have taken a different approach.

Line — which pioneered the concept of stickers — takes a very curated approach, with sticker packs approved by the company itself. That walled garden approach has helped it curate the best selection of stickers, many of which are paid. That’s nothing to be scoffed as since Line makes hundreds of millions of dollars from sticker purchases every year.

Telegram has the most open sticker platform. Anyone can make and publish stickers in just minutes, but that leads to its own problems such as plagiarism and differing levels of quality.

Either way, WhatsApp’s move into stickers is very much a Facebook-led move.

The service’s founders — Jan Koum and Brian Acton — have both left the social network under controversial terms, at least according to Acton himself.

Prior to the acquisition deal, both men were very vocally opposed to advertising, games and other functions. They deemed them trivial and believed that they detracted from the core focus of WhatsApp: simple and fast messaging.

At this point, their ethical ship has long since sailed with Facebook introducing features like a business service and ad integrations with Facebook, while there are plans to roll out payments and other features that Koum and Acton would no doubt have railed against. It’s enough to make you vomit over the side of your yacht in the Mediterranean.