Walmart announced today an expansion of its existing relationship with financial services provider Green Dot, which will continue to serve as the issuing bank and program manager for the Walmart MoneyCard program for another seven years. The two companies also agreed to partner on the creation of a new accelerator that focuses on the intersection of retail and consumer financial services.

The accelerator, called Tailfin Labs, will help startups develop solutions that integrate omni-channel shopping and financial tech, which can be aimed either at consumers or businesses. These may involve products built on top of Green Dot’s “Banking-as-a-Service” (BaaS) platform.

“Green Dot is extremely proud and honored to both extend our MoneyCard partnership for many years and to additionally enter into an entirely new equity partnership with Walmart in the creation of a fintech accelerator,” said Steve Streit, founder and CEO, Green Dot, in a statement. “We believe the combination of Walmart’s unmatched retail ecosystem with Green Dot’s innovative and highly flexible BaaS platform, which enables the world’s largest technology and consumer brands to address their consumers with bespoke financial products and services, has the opportunity to create and bring to market many new and exciting innovations over the years to come.” 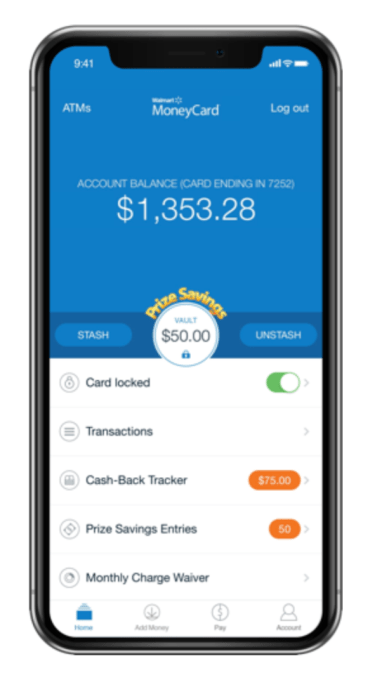 Walmart partnered with Green Dot in 2006 to create the Walmart MoneyCard, which offers FDIC-insured accounts and cash-back rewards on Walmart purchases, alongside other features, like early direct deposit, online bill pay, prize savings entries and more — as well as the usual set of features you’d have in a personal checking account, but without the fees. It’s now the largest retailer exclusive prepaid account program in the U.S.

In many ways, it was also a precursor to the sort of mobile banking startups seen today, which directly target consumers with similar products.

This is a busy space these days, as more companies go after the growing market of millennials (and even their younger Gen Z counterparts) who don’t want a traditional bank. Instead, they want banking services in a modern, easy-to-use mobile interface, where innovative features help them to better save and manage their money.

Just last week, for example, mobile banking app Current snagged $20 million more in funding for its service, now used by half a million users. Others in the space include Step, Cleo, N26, Chime, Simple and Stash, to name a few.

The new accelerator is seemingly poised to capitalize on this trend, while also giving Walmart and Green Dot a new foothold in the market.

“Over the years, Walmart has brought to market many innovative industry-defining financial services offerings to serve our customers – including several introduced through the Walmart MoneyCard program managed by Green Dot,” noted Daniel Eckert, senior vice president, Walmart Services and Digital Acceleration, in an announcement. “With this expanded relationship, and by leveraging Walmart’s footprint and existing offerings with Green Dot’s cutting-edge capabilities, we’ll be uniquely positioned to offer an unmatched set of customer experiences that sit at the nexus of omni-channel retail and tech-enabled financial services,” he said.

The new agreement between Green Dot and Walmart begins January 1, 2020 and will replace the agreement that would have otherwise expired in May 2020.