Router maker Eero is expanding its focus on subscriptions with a new two-tier system. Eero already had a $10 per month subscription called Eero Plus. It is now called Eero Secure+. The company is adding a cheaper plan with fewer features for $3 per month.

It seems a bit counterintuitive that Eero is selling software subscriptions. The company is mostly known for its tiny mesh routers that you can put in every room of your house.

Eero originally introduced a subscription back in 2017. It was designed as a sort of Amazon Prime of internet services focused on security. It included family plans to password manager 1Password, VPN service Encrypt.me and antivirus MalwareBytes.

Eero Secure+ is more or less a new name for Eero Plus. It costs $9.99 per month or $99 per year and includes the same services, as well as a few software additions, such as parental controls, filtering of dangerous websites at the network level as well as ad blocking.

Essentially, Eero intercepts DNS queries and blocks the ones to suspicious content — it could be a phishing site, an adult site or an ad network. The company replaces your default DNS with ZScaler’s DNS for that feature.

If you don’t want 1Password, Encrypt.me or MalwareBytes, you can now subscribe to Eero Secure to get those DNS-powered features. It costs $2.99 per month or $29.99 per year. 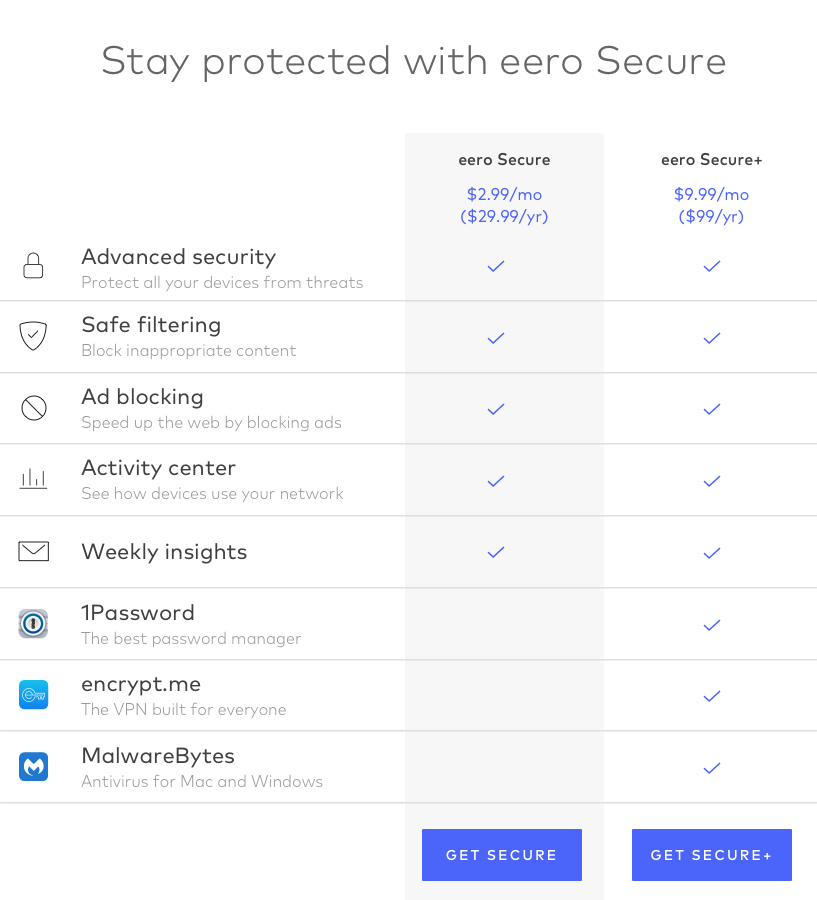 As a reminder, Amazon acquired Eero in February 2019. Eero promised that its privacy policy wouldn’t change after the acquisition.

Still, paying a subscription for DNS filtering is a bit odd. Some public DNS services, such as Quad9, block access to malicious websites.

And if you’re looking for a fun weekend project, you can buy a cheap Raspberry Pi and play with Pi-Hole, an open-source project that basically does everything Eero Secure+ does. You also can build your own VPN service, as you should never trust VPN services. They don’t make you more secure and they can basically see all your network traffic.