Wireless networking startup Eero was founded on the premise of providing “WiFi that works.” With easy setup and the ability to boost your signal by just adding more WiFi stations, Eero introduced a new category of wireless mesh networking products to market.

But since there are now multiple WiFi mesh competitors out there, Eero can’t afford to be left behind. With that in mind, the company is announcing two new hardware products for consumers and additional security features users can subscribe to.

Today the company is launching a new version of its flagship Eero wireless base station. The second-gen Eero is the same size and shape of its predecessor, but the company has drastically upgraded the underlying hardware. The second-gen router features triband WiFi — meaning it can broadcast on three wireless bands simultaneously — and is twice as powerful as the original Eero.

While adding stronger WiFi connectivity, the company is looking to future-proof its products by introducing some new emerging technologies. For instance, the new Eero hardware is powered by USB-C to match new smartphones and computers hitting the market… and it will also include Thread wireless connectivity to reach a whole new generation of low-power “Internet of things” devices that are finding their way into consumers’ homes.

Along with the new second-gen router, the company is adding a second hardware product called the Eero Beacon. The Beacon is designed to plug directly into wall sockets in places like kitchens, hallways and stairwells, where it’s inconvenient to have a corded product. 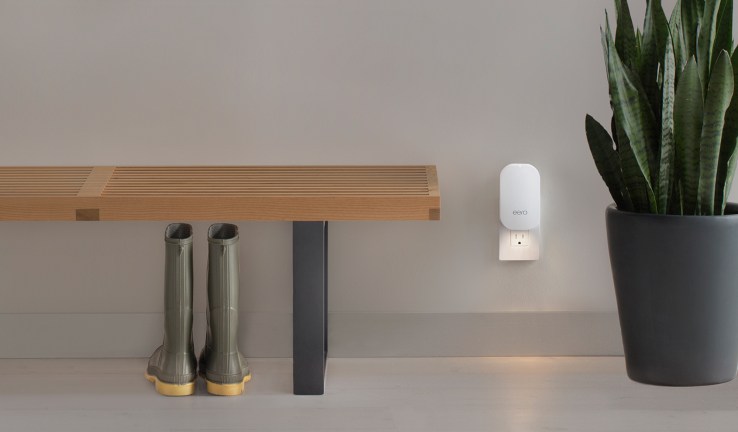 While the Beacon is about half the size of the original Eero, it is more powerful that the first-generation product. But, just like all other Eero devices, the Beacon is backward compatible and can be used to easily extend the range of a home’s WiFi system without a lot of hassle and setup. It just needs to be plugged in and added via the Eero app.

When the Eero team first began working on solving this problem three years ago, it started with the premise that tech in general has the ability to make things easier and more intuitive to use. However, as more connected devices entered the home, the ability to manage all of them became more complicated and more frustrating. 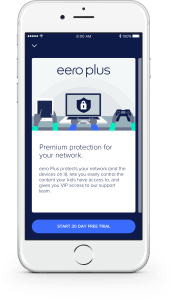 Since we’re moving to a world where seemingly every new device in the home will be connected to the Internet, and every piece of content we consume will soon be delivered over the Internet, Eero CEO Nick Weaver argues that consumers will need a home operating system to help “manage” all of those devices and ensure content is delivered flawlessly.

In addition to advanced security protection, Eero is giving users more granular control over who can access what content on the Internet. With enhanced parental controls available in Plus, adults can filter out adult, illegal or violent content, and could enable SafeSearch for specific profiles on the network.

Eero Plus will provide more value for customers looking for added protection or more advanced control over their networks, but it also provides a new revenue stream for the company. It also lays the foundation for Eero to introduce more services-oriented offerings in the future. Eero Plus will be offered as a monthly subscription of $9.99 or yearly subscription of $99.

With the new hardware comes new pricing for Eero’s WiFi products, and also new retail locations where customers can buy them. In addition to online channels like Eero.com and Amazon, the products will be available on sale in Best Buy, Walmart and Target retail locations in the coming weeks. Below is a rundown of configurations that will be for sale: