While Slack is trying to kill email, a new email startup backed by Kleiner Perkins is trying to make corporate email more like Slack.

Consider is an email service for startups that balances some premium individual features with collaboration tools that it hopes will help them bring startups on board.

The founders of Consider both met at Intercom as the 1st and 10th employees there. While at Intercom, CEO Ben McRedmond met Kleiner Perkins’ Mamoon Hamid, who was an early investor there. Hamid also wrote the first check for Consider before the founders even had a product to demo. That 2017 check combined with a more recent investment from Bedrock brings the total funding for the startup to $5 million.

As the product emerges from stealth, it’s also signaling a shift in its customer focus from individuals wanting an email experience that’s “calm and focused” to startup teams that are looking to keep more of their team’s collaboration happening inside email.

The central part of this strategy is the addition of a Slack-like Groups feature, which allows people to join shared inboxes inside their company that people can forward messages to or cc on emails. The founders started the company with the idea that the inbox was essentially a list of to-dos, with this idea also extending to group-work, allowing engineers to amass bug reports and create a shared repository of emails with relevance to the whole group. 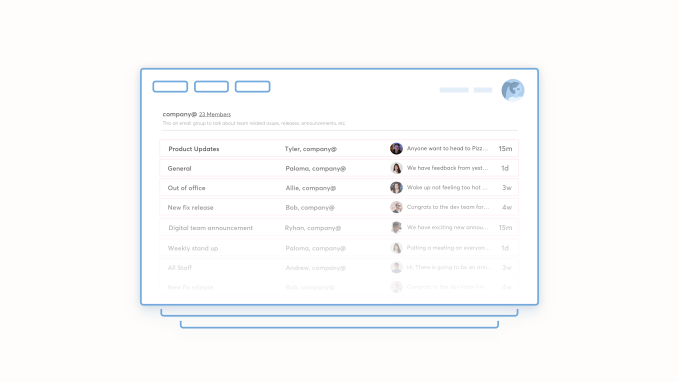 The startup says they aren’t actually trying to kill Slack or other synchronous chat tools but they want people to use email in a more collaborative way, and part of that means categorizing the emails you receive and putting them in front of the right eyeballs. The fact is, the bulk of this functionality — though not all — is possible inside of stock Gmail with the right filters, but it’s all pretty messy and people will generally pay for an interface that is built to be effective.

The premium email service space has been gathering attention; most of that attention has been directed toward $30/month Superhuman, which was recently valued at $260 million.

Consider is charging $10 per user per month. They’re not discouraging individual users curious for a new inbox experience either, though without Groups there is less to differentiate the app. On an individual basis the app brings functionality focused on sorting emails and sending you batches of the ones it has deemed non-critical at certain times of the day so you aren’t being inundated with notifications.

The app is out of beta and live for sign-ups of Gmail users on Web, Mac, iOS and Android.