A $30-per-month email service capturing the adoration of investors and founders in Silicon Valley is perhaps an unsurprising story in a subscription-obsessed landscape, yet we’re only now hearing how stealth-y startup Superhuman has captured investor $$$.

The New York Times reports that the SF startup closed a $33 million Series B led by Andreessen Horowitz last month, raising at a $260 million valuation. The company has been oddly tight-lipped about its funding for a startup that people won’t stop talking about, though CEO Rahul Vohra has justified this as a desire to keep the story on the product not the money.

Superhuman has little need for a marketing budget when every VC’s twitter is spreading the gospel of luxury email. 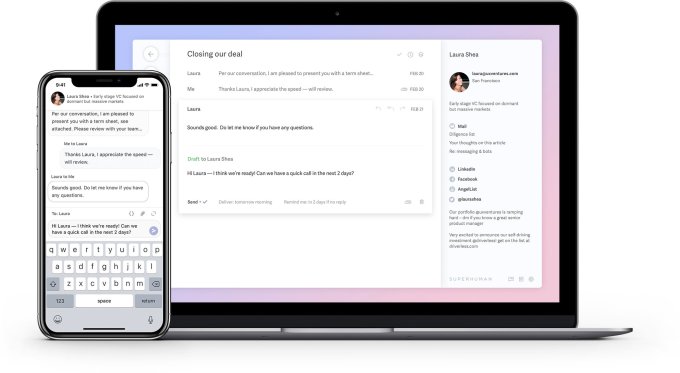 The startup has seemed to have grown at its own pace, the service’s members frequently reference the 100,000+ people on the waiting list to pay for the email app  though the company seems most intent on growing by word of mouth referrals which allow you to hop the line. (Roose’s story details that list is actually 180k people long, and that the company has less than 15k on-boarded subscribers)

The service is designed around helping people that spend several hours in email every day to find areas to cut down on friction. What’s it like though?

I spent about 6 months paying for the service (thanks for the referral Niv) before eventually unsubscribing a couple months ago. There’s certainly plenty to love, though the price can be a bit to stomach when you realize how much you’re paying for email compared to other services.

Superhuman’s central strength is speed. Its other strength is that it feels like an exclusive club, though its members probably have nicer things to say about it than The Battery.

More on its functional differentiators in a bit, but the culture surrounding the app is a little fascinating. It’s a luxury app icon to have on your phone. You won’t find the Superhuman app in the App Store, you have to be approved for the service in iOS’s TestFlight where constant beta updates are delivered.

Other founders I’ve chatted with have been inspired by how Superhuman’s on-boarding process helps users feel like they’re getting a product custom-built for them. I met with Vohra during my 30-minute meeting where he walked me through the product and asked me about my own email habits as he helped me set up my account. The result is a bizarre connection with the product and team.

Example: for 30 days after you set up your account, you get an email from Vohra detailing some tips and tricks for using the service. Not only did I not immediately unsubscribe from these messages, I read almost all of them. When I filled out a survey at the end surrounding what I thought about the service, an employee at the startup shot me an email a few days later with a full response, I responded to that.

But honestly, how many paid services would expect its users to include a line in their signature plugging the service “Sent via Superhuman” and never disable it? And yet, the cult of Superhuman led me to keep it for awhile until my eyes were opened that flexing my $30/month email in my signature made me look like an asshole. Yes, it did.

What all of these interaction earn Superhuman is that when reality eventually beamed on me that I was not making VC money and I should probably end this little experiment, I almost felt like I had to apologize to the startup for cancelling my subscription. I felt so coddled as a member of the service with every new little update feeling like a new membership perk.

Okay, okay, yes, there are other ways to feel special that aren’t a $30/month electronic mail service. What is so nice about using it?

Speed is the top-line item. The desktop experience is the platform’s key differentiator, it’s structured entirely around keyboard shortcuts and the app is constantly training you to move through your email more quickly.

A couple of months in, I truly was spending far less time combing through pitches and tips, particularly thanks to the custom buckets that Superhuman sorts your mail into. The “Important” tab in your inbox differentiates newsletters and mailing list emails and only sucks in messages that were sent directly to you. It is miles better than the rudimentary sorting that Gmail pulls off.

If you aren’t used to the cult of “inbox-zero,” the service will drag you into it. The app prompts you to archive, snooze or delete every email in your inbox, transforming the utility of the service from a simple mailbox into a to-do list.

Other features like the souped up email tracking lets you know when your email was opened and does this much better than the free Gmail extensions I’ve tried. When a founder tried to claim he hadn’t seen my email asking him about some problems at his startup, I checked the app and saw he had opened it no less than 17 times on his phone and PC. Hmmm…

Before starting Superhuman, Vohra founded Rapportive which LinkedIn later bought. He kind of recreated that service for Superhuman which really allows you to get into people’s inboxes more easily. If you can guess someone’s email, a sidebar in the app will populate with a bio of the person if you’re correct. This is obviously pretty useful to a journalist, but if you’re trying to cold email your way into new opportunities it can be pretty great as well.

I’m perhaps not enough of a power user to get the most of snippets, which allow you to quickly inject canned responses that you can stylize, but they seem like they’d be amazing for intros though I rarely ended up using them.

When it comes to shortcomings, Superhuman is a desktop experience first-and-foremost. I’m a heavy mobile email user and the Superhuman app may have better than most other iOS email apps I had used, but it is still iterative on mobile and I think I was left thinking about the subscription costs most when I was swiping through emails there.

Even in the six months that I was a subscriber the mobile app made some hefty advances, though getting people to continually justify a subscription over what would otherwise be free is a challenge that won’t go away as long as it holds its price tag.

The issue for Superhuman is that in a lot of ways the app just trains you how to use email more effectively. Since cancelling my subscription, I’ve dialed in my Gmail keyboard shortcuts and shifted how I flag and archive messages and I’d say I’m operating fairly close to the efficiency I pulled off on the premium service.

The mental load of spending $30 month on email is admittedly heavy and is undoubtedly a barrier for Superhuman scaling to different echelons of users, but with $33 million from Andreessen Horowitz, the startup certainly has some options for how it grows from here. I do still dearly miss the “Important” tab, email tracking and sidebar profiles and perhaps I will eventually return though I imagine that will happen when the service costs less than what I put into Apple Music and Netflix combined.