Netflix is still the No. 1 subscription streaming service in the U.S., according to a new report from eMarketer, but rivals, including Amazon Prime Video and Hulu, are starting to cut into its market share. The analyst firm forecasts 182.5 million U.S. consumers will subscribe to over-the-top streaming services this year, or 53.3% of the population. Netflix is still the top choice here, with 158.8 million viewers in 2019, and it is continuing to grow. However, its share of the U.S. over-the-top subscription market will decline even as its total subscriber numbers climb, the report said.

Though Netflix announced in Q2 the first drop in U.S. users in nearly a decade, eMarketer says Netflix will see strong growth throughout the rest of the year — up 7.6% over 2018. This will be driven by the new seasons of popular series like “Orange Is the New Black” and “Stranger Things,” as well as Academy Award-winning director Martin Scorsese’s new movie, “The Irishman.” 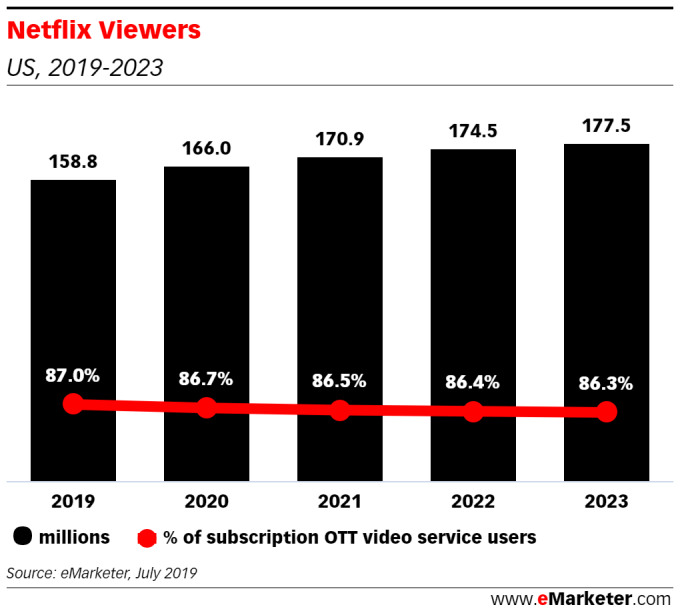 This decline in market share is attributed to the rise of rival services, like Hulu and Prime Video.

Prime Video, meanwhile will remain the second-largest subscription over-the-top video provider in the U.S. in 2019, the report says, with 96.5 million viewers. That’s up 8.8% over last year.

The firm estimates Prime Video will reach a third of the U.S. population by 2021. 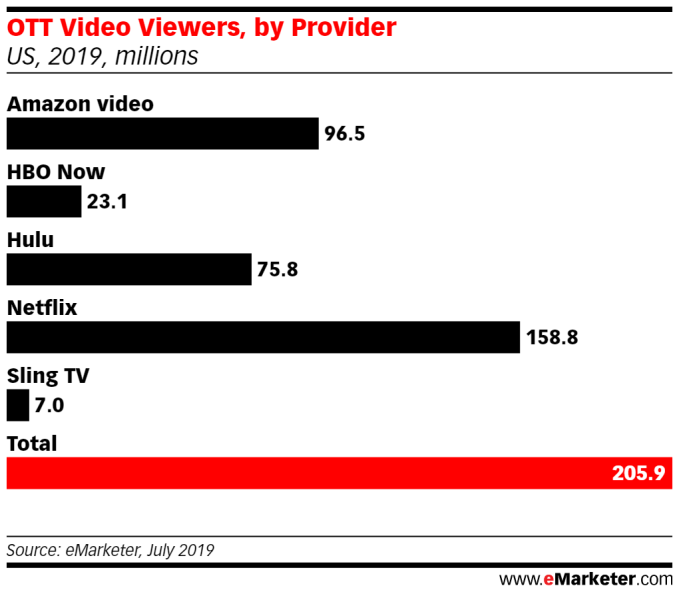 Netflix market share dominance is about to face new threats as well, most notably from the Disney-Hulu-ESPN bundle, which is priced the same as a standard U.S. Netflix subscription.

“Netflix has faced years of strong competition for viewers, coming from streaming video platforms, pay-TV services, and even video games,” said eMarketer forecasting analyst Eric Haggstrom. “While there is no true ‘Netflix killer’ on the market, Disney’s upcoming bundle with Disney+, Hulu and ESPN+ probably comes closest. Netflix’s answer has been to stick to what has made it the market leader—outspending the competition on both licensed and original content, offering customers a competitive price,” he added.

Disney isn’t the only one with a new streaming service in the works, though.

Apple TV+ is poised to launch later this year, and is said to be spending $6 billion on content — far more than the $1 billion that had been reported. It’s also said to be considering a competitive $9.99 per month price point.

NBCUniversal and AT&T WarnerMedia are also poised to enter the market, the latter with HBO Max. And following the CBS-Viacom merger, the combined company is looking to beef up its own platforms, CBS All Access and the ad-supported Pluto TV, with the newly acquired content.

“The market for streaming video has been driven by an explosion in high-end original content and low subscription costs relative to traditional pay TV,” Haggstrom noted. “A strong consumer appetite for new shows and movies has driven viewer growth for services like Netflix, Hulu and Amazon Prime Video, as well as the broader market.”