YouTube is rolling out more ways for its creators to engage fans and generate revenue, the company announced today at the VidCon event in Anaheim, Calif. Last year, YouTube used the event to launch new products like channel memberships, merchandise shelves, premieres and more. This time around, it’s expanding several of those existing options with new features, while also introducing new products like Super Stickers and Learning Playlists — the latter which aims to promote the educational use of YouTube.

Launched in January 2017, Super Chat lets fans pay to make their message stand out during a YouTuber’s live stream or premiere. Today, YouTube says Super Chat is now the No.1 revenue stream across nearly 20,000 channels — a 65% year-over-year increase.

More than 90,000 channels have used Super Chat to date, with some earning more than $400 per minute, thanks to the feature.

Given Super Chat’s traction, YouTube is introducing Super Stickers, which will launch in the next few months. Fans will be able to purchase these new, animated stickers during live streams and premieres in order to show creators how much they like their content.

The idea for Super Stickers seems to be inspired by gaming site Twitch’s Bits emotes and cheermotes, which also bring animated stickers into chat as a way of supporting video creators. However, YouTube’s Super Stickers will have a different look-and-feel, and will be offered across different languages and categories — including gaming, fashion and beauty, sports, music, food and more.

At present, fans can opt to pay the $4.99 Channel Membership subscription to get unique badges, new emojis and other special perks like access to exclusive live streams, extra videos or shout-outs. Today, YouTube is introducing a much-requested change to memberships: levels.

With levels, creators can set up to five different price points for memberships, each with their own set of perks. The feature has already been tested by select YouTubers, including the Fine Brothers Entertainment on their REACT channel. Their channel membership revenue increased by 6x after they rolled out two more expensive pricing tiers, YouTube said.

In addition, YouTube is expanding its Merch shelf feature that also launched last year at VidCon. Its debut partner Teespring helped creators sell merchandise like t-shirts, hats, phone cases and more. YouTube took a small commission on the sales, but said the majority went to the creator — along with the money made from the merch sales themselves.

YouTube says “thousands” of channels have more than doubled their revenue since launch thanks to the Merch shelf, Super Chat and Channel Memberships.

Beyond the monetization features, YouTube also took time to speak about the educational and inspirational use cases on its site. 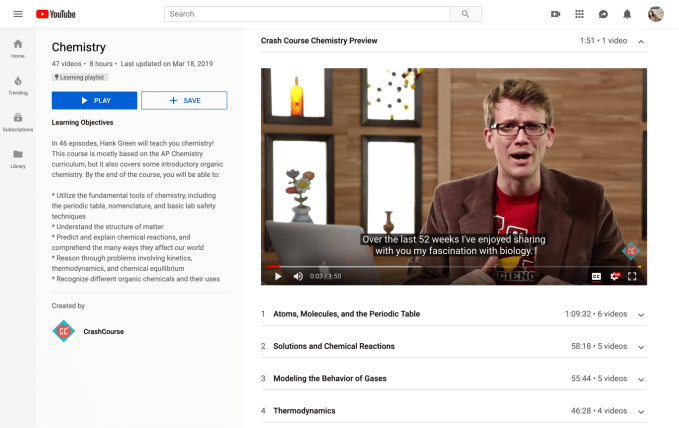 To make it easier for people to use YouTube to learn something new, the company is debuting a new feature called Learning Playlists, which offers more structure than is available with playlists today. The feature allows educational video creators to divide videos into chapters around key concepts, going from more basic to more advanced. And it hides recommendations from the Watch page — a first for YouTube.

Initially, only a handful of trusted partners get to test this feature, including Khan Academy, TED-Ed, The Coding Train and Crash Course, to name a few.

Finally, the site’s fundraising tool, YouTube Giving, is preparing to exit beta after a year of testing. The feature will launch in the months ahead and become available to thousands of U.S. creators. Once live, fans can click a Donate button to give to the nonprofit the creator wants to support. 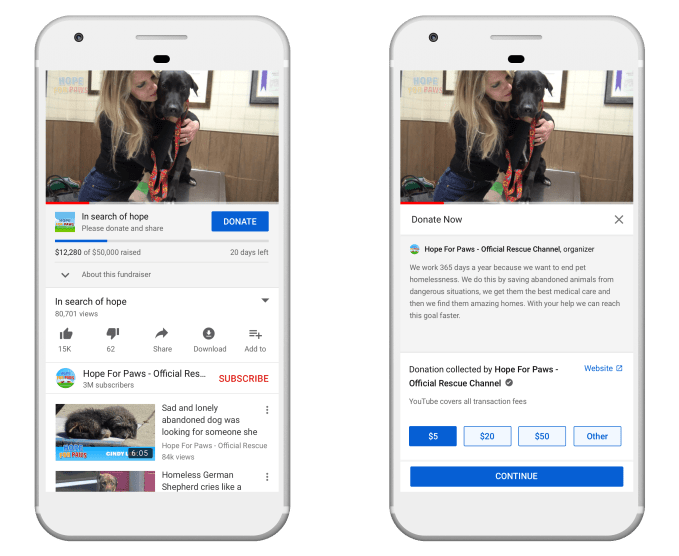 Ahead of today’s VidCon keynote from YouTube Chief Product Officer Neal Mohan, the company had announced some well-received changes to the site’s copyright infringement tools.

It said copyright owners now have to specify the timestamp in the video their content appears, while creators will be able to use an updated version of YouTube Creator Studio to easily remove the portion of the content associated with the claim.

This helps to address situations where the Manual Claiming system was being used (or some would say abused) to claim very short — even only one-second long — pieces of content, or incidental content — like when a creator walks past a store that’s playing music, for example. The company had said in April it was looking to address this.

The new system lets creators easily mute the sound when the claimed song plays, replace the song with free-to-use tracks or quickly trim out the infringing content instead of taking their video down.

Creators generally welcome the changes and new features that help them better engage fans and make money (or at least, not lose money).

That being said, YouTube is still under scrutiny for its bigger missteps and other practices like the gaming of its recommendation system and its role in creating a pedophilia wormhole; its alleged COPPA violations, which the FTC was alerted to; its ability to radicalize viewers as they’re pointed to ever more extreme content; its contribution to a world where parents exploit their kids for cash; and issues around how it polices “free speech” and hate speech, among other things.

In the grand scheme of things, YouTube has a lot on its plate beyond a few stickers and new ways to sell swag. But these are the sorts of tools that lock in creators to the YouTube platform, even amid threats from other large tech companies like Facebook, Instagram and now Snapchat, which just announced new creator shows.