YouTube has placed new restrictions on the channel of a UK far right activist which are intended to make hate speech less easy to discover on its platform.

Restrictions on Stephen Yaxley-Lennon’s YouTube channel include removing certain of his videos from recommendations. YouTube is also taking away his ability to livestream to his now close to 390,000 YouTube channel subscribers.

Yaxley-Lennon, who goes by the name ‘Tommy Robinson’ on social media, was banned from Twitter a year ago.

Buzzfeed first reported the new restrictions. A YouTube spokesperson confirmed the shift in policy, telling us: “After consulting with third party experts, we are applying a tougher treatment to Tommy Robinson’s channel in keeping with our policies on borderline content. The content will be placed behind an interstitial, removed from recommendations, and stripped of key features including livestreaming, comments, suggested videos, and likes.”

Test searches for ‘Tommy Robinson’ on YouTube now return a series of news reports — instead of Yaxley-Lennon’s own channel, as was the case just last month. 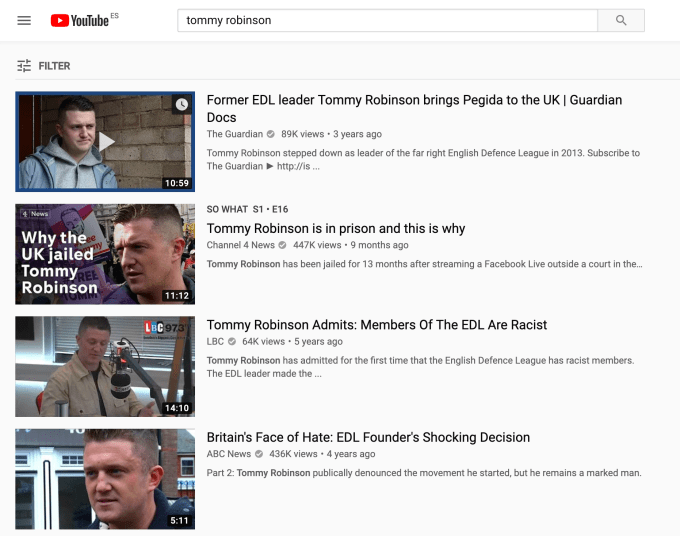 YouTube had already demonetized Yaxley-Lennon’s channel back in January for violating its ad policies.

But as we reported last month Google has been under increasing political pressure in the UK to tighten its policies over the far right activist.

The policy shift applies to videos uploaded by Yaxley-Lennon that aren’t illegal or otherwise in breach of YouTube’s community standards (as the company applies them) but which have nonetheless been flagged by users as potential violations of the platform’s policies on hate speech and violent extremism.

In such instances YouTube says it will review the videos and those not in violation of its policies but which nonetheless contain controversial religious or extremist content will be placed behind an interstitial, removed from recommendations, and stripped of key features including comments, suggested videos, and likes.

Such videos will also not be eligible for monetization.

The company says its goal with the stricter approach to Yaxley-Lennon’s content is to strike a balance between upholding free expression and a point of public and historic record, while also keeping hateful content from being spread or recommended to others.

Affected videos will still remain on YouTube — albeit behind an interstitial. They also won’t be recommended, and will be stripped of the usual social features including comments, suggested videos, and likes.

Of course it remains to be seen how tightly YouTube will apply the new more restrictive policy in this case. And whether Yaxley-Lennon himself will adapt his video strategy to workaround tighter rules on that channel.

The far right is very well versed in using coded language and dog whistle tactics to communicate with its followers and spread racist messages under the mainstream radar.

Yaxley-Lennon has had a presence on multiple social media channels, adapting the content to the different platforms. Though YouTube is the last mainstream channel still available to him after Facebook kicked him off its platform in February. Albeit, he was quickly able to workaround Facebook’s ban simply by using a friend’s Facebook account to livestream himself harassing a journalist at his home late at night.

Police were called out twice in that instance. And in a vlog uploaded to YouTube after the incident Yaxley-Lennon threatened other journalists to “expect a knock at the door”.

Shortly afterwards the deputy leader of the official opposition raised his use of YouTube to livestream harassment in parliament, telling MPs then that: “Every major social media platform other than YouTube has taken down Stephen Yaxley-Lennon’s profile because of his hateful conduct.”

YouTube claims it removes videos that violate its hate speech and violent content policies. But in previous instances involving Yaxley-Lennon it has told us that specific videos of his — including the livestreamed harassment that was raised in parliament — do not constitute a breach of its standards.

It’s now essentially admitting that those standards are too weak in instances of weaponized hate.

Yaxley-Lennon, a former member of the neo-nazi British National Party and one of the founders of the far right, Islamophobic English Defence League, has used social media to amplify his message of hate while also soliciting donations to fund individual far right ‘activism’ — under the ‘Tommy Robinson’ moniker.

The new YouTube restrictions could reduce his ability to leverage the breadth of Google’s social platform to reach a wider and more mainstream audience than he otherwise would.

Albeit, it remains trivially easy for anyone who already knows the ‘Tommy Robinson’ ‘brand’ to workaround the YouTube restrictions by using another mainstream Google-owned technology. A simple Google search for “Tommy Robinson YouTube channel” returns direct links to his channel and content at the top of search results.

Yaxley-Lennon’s followers will also continue to be able to find and share his YouTube content by sharing direct links to it — including on mainstream social platforms.

Though the livestream ban is a significant restriction — if it’s universally applied to the channel — which will make it harder for Yaxley-Lennon to communicate instantly at a distance with followers in his emotive vlogging medium of choice.

He has used the livestreaming medium skilfully to amplify and whip up hate while presenting himself to his followers as a family man afraid for his wife and children. (For the record: Yaxley-Lennon’s criminal record includes convictions for violence, public order offences, drug possession, financial and immigration frauds, among other convictions.)

If Google is hoping to please everyone by applying a ‘third route’ of tighter restrictions for a hate speech weaponizer yet no total ban it will likely just end up pleasing no one and taking flak from both sides.

The company does point out it removes channels of proscribed groups and any individuals formally linked to such groups. And in this case the related far right groups have not been proscribed by the UK government. So the UK government could certainly do much more to check the rise of domestic far right hate.

But YouTube could also step up and take a leadership position by setting robust policies against individuals who seek to weaponize hate.

Instead it continues to fiddle around the edges — trying to fudge the issue by claiming it’s about ‘balancing’ speech and community safety.

In truth hate speech suppresses the speech of those it targets with harassment. So if social networks really want to maximize free speech across their communities they have to be prepared to weed out bad actors who would shrink the speech of minorities by weaponizing hate against them.