As Slack reportedly readies itself for an entry to the public markets, the high-flying startup is ready to brag a little bit about what it has accomplished in the past year.

In a blog post, the company shared that it now has 10 million daily active users on the platform, up from 8 million DAUs in May. It’s not just tech companies in Silicon Valley using the service either, the company broke down the number a bit, clarifying that more than half of the DAUs are from outside the United States. 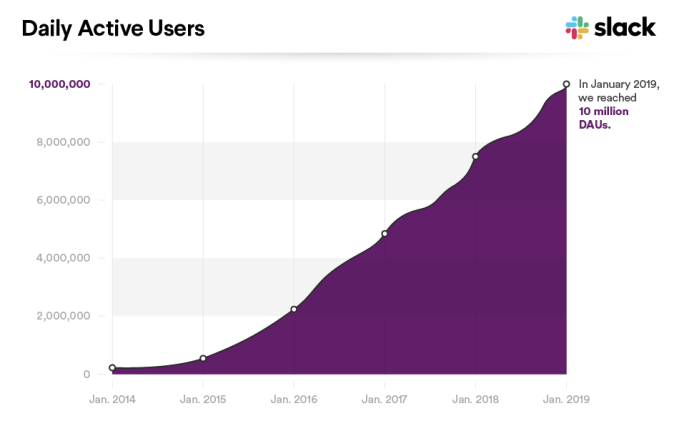 We didn’t get an update on the number of paid users — the company also shared in May that it had 3 million paying users — but the company did say that the number of organizations on the platform has grown to 85,000, a 50 percent increase over the past year. The company’s major challenge of the past couple years has been bringing on more big companies to its platform; it seems they’ve definitely had some success, detailing in the blog that 65 of the Fortune 100 companies were slacking away.

Even with its weird new logo, the company seems to be growing at a fairly consistent pace from a user standpoint. We got a look at how things were looking on the financial side via a recent report in The Information, which forecast its 2019 revenue at $640 million and detailed that the company had more than $900 million in cash on its balance sheet.

The company was last valued at more than $7 billion.