Spotify is shutting down a program that allowed indie artists to upload their own music to the streaming service, the company announced today. The new upload tool was first introduced in beta testing in September 2018, offering U.S. artists an easy way to add tracks and their accompanying metadata to Spotify with just a few clicks. Now, artists are being given until the end of the month to transition to another distributor, and will only be paid for streams on their uploaded content through July 2019.

The company, in its announcement of the shutdown, says its energies are better focused on the development of features and tools that are unique to Spotify — like tools for playlist submission, for example, or upgrades to its Spotify for Artists dashboard, which is used by more than 300,000 creators.

Meanwhile, Spotify believes that music distribution is best handled by partners. This mirrors some artist feedback — that it didn’t make sense to upload directly to Spotify, then have to turn to another distribution tool to get their work on other services. 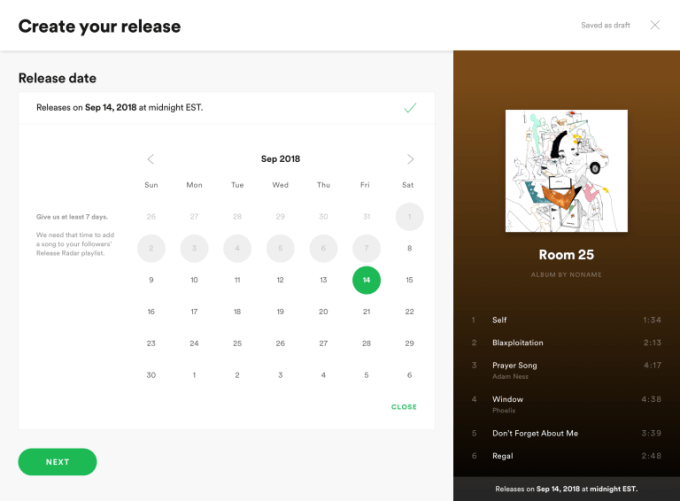 We confirmed with the company there were a few hundred artists who had actually uploaded music to the beta, and a few hundred more that had been invited to the test but hadn’t yet uploaded. And all those who had used the Direct Upload Beta did have to use another distribution service to get their music on other platforms.

Another possible complication is that Spotify announced an investment in distribution service DistroKid after the launch of the upload beta. DistroKid supports cross-platform uploads to Spotify, as well as iTunes, Apple Music, Pandora, Amazon, Google Play, Tidal, iHeartRadio, YouTube, Deezer and others. At the time of the deal, Spotify said it planned to integrate its Spotify for Artists dashboard with DistroKid. That would cause overlap and redundancy with its own, in-house upload tool.

That integration hasn’t yet occurred, but it’s still in the works, we’re told. Spotify isn’t saying when the integration will go live, however.

Spotify is pointing artists participating in the beta to other distributors, including preferred partners DistroKid, CD Baby and EmuBands. The beta upload tool itself will shut down on July 30, 2019. No more invites are being offered, and artists will only be paid on July 2019 streams. The final payment takes place on August 28, 2019. Other details are being offered in an FAQ.

In addition to the official announcement, Spotify is sending out emails to the beta participants with discounts on switching to other distributors, which may include either a free first year of service or free first release.

The feature to offer direct uploads may have also caused tension with labels, but that wasn’t mentioned — or even referenced between the lines of the official announcement today.

“We’re working with our distribution partners to help make this transition as simple as possible for the artists who uploaded music through the beta,” the company said via its announcement. “Thank you to the artists who participated in our upload beta. We’re incredibly proud to have played a small part in the music they released. Spotify wouldn’t be what it is today without artists and labels who are willing to collaborate with us to build a better experience for creators and listeners.”