Spotify today is taking another step that may make record labels uncomfortable. Fresh off reports that the streaming service is cutting its own licensing deals with independent artists, the company this morning announced it will now allow indie artists to directly upload their music to its service, too.

The upload feature is today launching into beta on Spotify for Artists, the online dashboard that arrived publicly last year. This dashboard and its accompanying mobile app allow artists to track metrics surrounding their streams and their fan base demographics.

Through the new upload tool, artists will now be able to add their own tracks to the streaming service in just a few clicks. 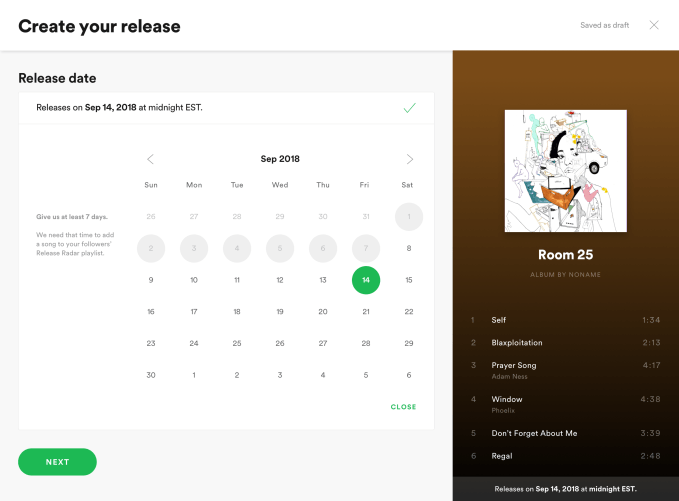 Explains Spotify, artists will upload the music, preview how things will appear, then edit the music’s metadata, if need be. They’ll also be able to choose when those new tracks “go live” on Spotify. (No more new music Fridays, perhaps.)

Most importantly, Spotify says that artists are paid as usual for their uploaded music – the royalty payments will simply be direct deposited to artists’ bank accounts every month.

Another new report in the dashboard will detail how much the uploaded streams are earning and when they can expect to be paid.

The upload option is free, and Spotify says it won’t deduct any fees or commissions of its own. 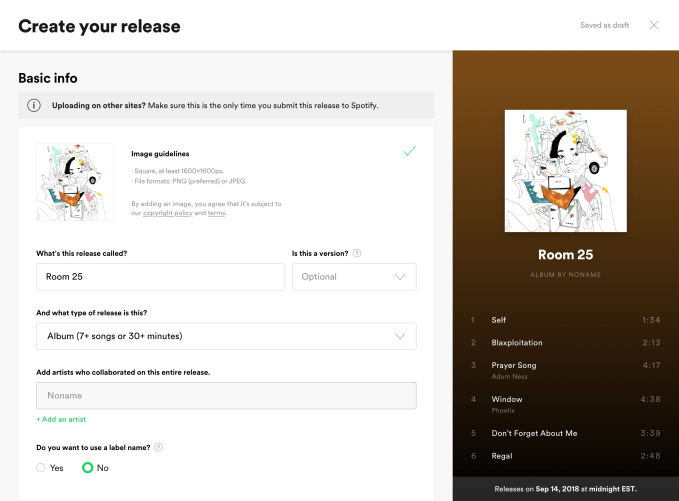 The move is likely to concern labels, who have traditionally acted as gatekeepers between artists and fans. But through digital media platforms, artists have been exploring new ways to build their audience.

For example, on SoundCloud – a service Spotify once considered acquiring –  indie musicians, DJs, bands and other performers have been able to attract followings. Similarly, YouTube has often served as a discovery vehicle for unknowns.

Both services will be impacted by this move, as it’s one of the reasons they’re used by artists. Now, they’ll be able to point fan bases directly to their Spotify tracks.

Those who are able to gain fans on their own may be able to route around the need for a label, and subsequently keep more of their earnings in the process.

“Artists receive 50% of net revenues from the songs they upload, and Spotify also accounts to publishers and collection societies for additional royalties related to the music composition,” said Kene Anoliefo, the Senior Product Lead for Spotify’s Creator Marketplace, confirming the payout structure.

Meanwhile, according to a recent report by The NYT, artists working with labels may see much smaller percentages. The report said that Spotify typically pays a record label around 52 percent of the revenue generated by each stream. The label, in turn, then pays the artist a royalty of anywhere from 15% to as high as 50%.

If artists are dealing directly with Spotify, they could be making more money.

Labels suggested that they could retaliate against Spotify for overstepping. The NYT had also said. They may do things like withhold licenses Spotify needs for key international expansions, like India, or not agree to new terms after existing contracts expire.

They could also offer more exclusives and promos to Spotify’s rivals, like Apple Music, which has surged ahead in the U.S. and is now neck-and-neck here with Spotify for paid subscribers. (Some reports, as well as Apple’s CEO Tim Cook, have claimed Apple Music is ahead in North America.)

Spotify has historically downplayed these concerns to investors, saying that it’s building a two-sided marketplace, and that it’s always licensed music from creators both “large and small” and will continue to license music from whomever owns the rights.

A music upload feature also means artists who own their own rights could break out big on Spotify if they catch the attention of playlist editors – something that Spotify now makes it easier for them to do, as well.

In addition, having indies upload music directly means Spotify could better compete against Apple Music by attracting more artists and their fans to its platform.

The upload feature is debuting in beta on an invite-only basis in the U.S., Spotify says. 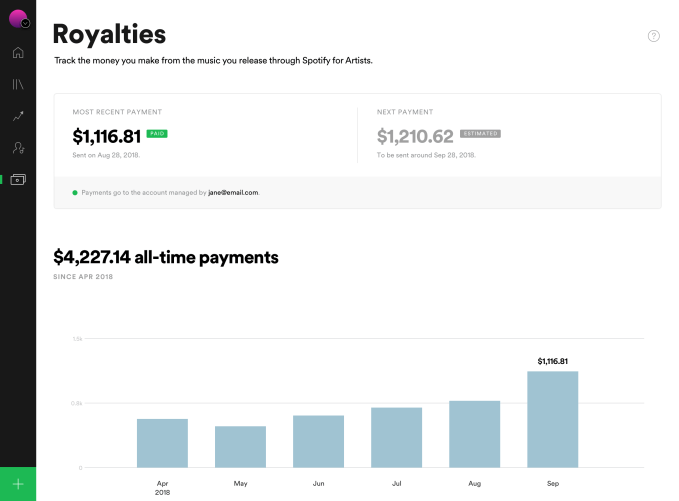 A small handful of independent artists are already on board, including Noname, Michael Brun, VIAA, and Hot Shade. They provided Spotify with some initial feedback in earlier testing ahead of the beta launch, the company says.

“We started off by working with artists who are both deeply engaged in our platform – so they use Spotify for
Artists often –  and they also release music often,” said Anoliefo, adding that music upload has been one of artists’ most requested features.

“We used the test with them to shape the tool and make an upload process that we think is really easy, transparent and flexible. It’ll enable artists to use the tool to upload music through Spotify for Artists whenever they like. There are no barriers or constraints. And they can upload as often as they’d like. And as many times as they like,” she said.

Over the next few months, Spotify will email other artists to ask them to try out the feature, as well.

Initially, it will open up access to a few hundred more, before rolling it out publicly to the over 200,000 monthly active users of the Spotify for Artists platform.

At launch, music upload will be a web-only feature. The company wouldn’t comment on its plans to bring the feature to mobile.