Hopper, the handy travel app that uses AI to predict airfare pricing, is today expanding its service to include hotels. Like airfare, hotel pricing is also dynamic — it can fluctuate with traveler demand. During busy times, prices are higher. And when a hotel has rooms to fill, the prices drop. Now, Hopper is bringing its same prediction technology to more than 270,000 hotels in more than 200 countries and territories worldwide.

The hotels, which can be booked directly within the Hopper app itself, span 1,600 major cities.

The company began testing hotel prediction algorithms back in October 2017, but only in New York. At the time, Hopper CEO Frederic Lalonde explained how online hotel booking differed from airfare. With plane tickets, people are usually just in search of the best price. But with hotels, other factors come into play.

That’s why the new feature lets travelers narrow searches not only by city, but also by neighborhood and points of interest. Hotels can additionally be filtered by the neighborhood, rating, price and their amenities.

Hopper says people who book at the right time will save $62 per night, on average, off the peak rates. But when people go shopping for hotels, they usually only spot-check prices or wait until the last minute to book. To get a better deal, the company suggests you set the app to monitor hotel prices and send push notifications when the hotel prices drop or when private rates become available.

These private rates can include package deals, member rates, geofenced rates, closed user rates, pre-purchased inventory blocks and more. Most people don’t know if these sort of rates are available to them, or if they would qualify. Hoppers says it will monitor these private rates, too, then alert you if you’re able to book a private deal.

In addition, the app offers a “Watch a Hotel” feature that will forecast and track the prices of specific hotels. That way, you can choose a handful of favorites places, then book when the prices become affordable to you — without having to waste time comparison shopping. 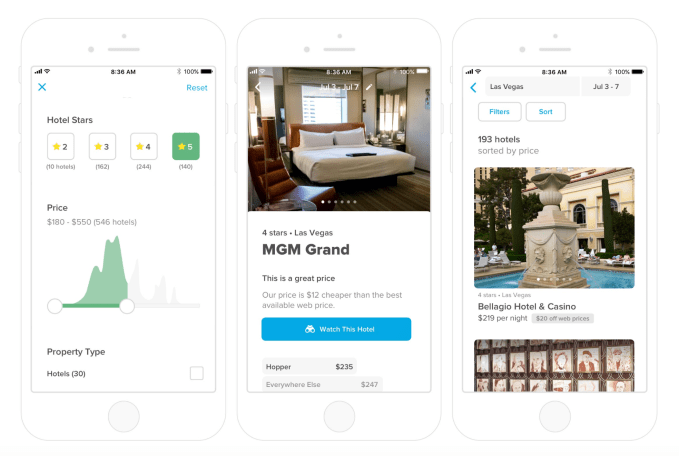 Over time, Hopper will learn more about your hotel preferences — for example, if you always book four or five-star hotels or those with pools. It will then use this understanding, combined with your usage of the app, to make better recommendations in the future.

The company says it’s already seeing good results from using these sorts of AI-based recommendations for airfare, as now 25% of bookings are the result of people booking a trip they weren’t planning for, but Hopper knew to suggest.

Hopper will take a commission that varies by property, but that’s never more than 10% — anything higher is passed along to the customer in the form of savings. The company is using a number of different hotel data suppliers as well as working with hotels directly on the new feature, it says.

The expansion comes at a time when Hopper’s business is growing. Last fall, the company raised another $100 million, valuing its business at $780 million. Last year, it booked more than a billion in sales, and users are today tracking $18 billion worth of flights and hotels per year in its app, which has passed 40 million downloads.

The hotel booking feature is live today in the Hopper app for iOS. It will roll out to Android in the next few weeks.