Just ahead of WWDC, Apple has launched a new App Store website in the hopes of better defending itself against recent antitrust and anti-competitive accusations. The website details how Apple runs its App Store, including how apps are curated and reviewed, and what business models are available to developers. It also features a section entitled “A Store that welcomes competition,” where Apple makes the case for a marketplace where its own apps live alongside those from third-party developers.

For example, it showcases how Apple’s own Messages app competes with Messenger, Slack, Snapchat and Viber; Apple’s Mail competes with Gmail, Outlook, Spark and Yahoo Mail; Maps competes with Google Maps, Citymapper, MAPS.ME and Waze; and so on. 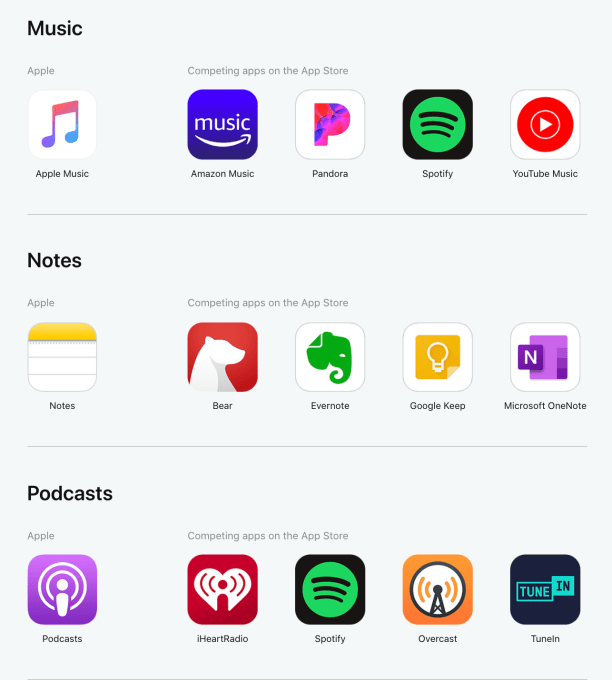 Spotify, naturally, is listed among the competitors for both Apple’s Music and Podcasts apps.

That’s not a surprise, given that Spotify has recently been making the case that Apple operates an anti-competitive environment. In a complaint filed with the EU in March, which is now reportedly under investigation, it claimed Apple tilted the playing field in its favor by operating iOS, the App Store and its own rival applications. Anyone else wishing to distribute an app that competes with Apple’s version then has to share a 30% cut of their app’s revenue with Apple.

This is the basis for a new antitrust lawsuit that the U.S. Supreme Court just this month ruled could proceed to the courts. 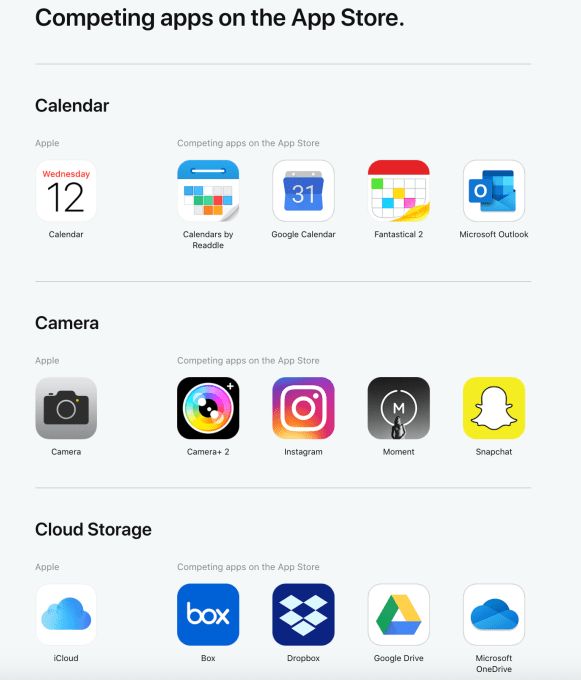 At the time of the ruling, Apple commented that “developers set the price they want to charge for their app and Apple has no role in that,” as a way to distance itself from the developers’ decision to set prices for iOS users higher.

“The only instance where Apple shares in revenue is if the developer chooses to sell digital services through the App Store,” it also said — a reminder that developers don’t have to support payments and subscriptions through Apple’s platform.

Amazon, for a long time, has only allowed users of its iOS shopping app to buy things like books, music, movies and TV shows via the web browser. Meanwhile, Netflix more recently dropped in-app subscriptions on both Google Play and the App Store.

Unfortunately, developers on iOS are limited in terms of informing their users how to make purchases outside the App Store, and are forbidden from offering a link to their website where consumers could proceed with the non-App Store purchase. But that would be a fairer system, as the “Apple tax” would instead be seen as a convenience fee for the ease of making an Apple Pay transaction on the consumer side, and Apple’s help with payment processing on the developer side.

Apple’s overall position on this matter is reiterated on the new App Store website, where it argues the value of its curated platform and its ability to reach 1 billion customers worldwide. It notes how it continues to invest in developer tools that aid in their financial successes. It references the job creation aspects of the App store — including 1.5 million U.S. jobs and more than 1.57 million jobs across Europe.

Apple also reminds us that it has distributed more than $120 billion to developers to date — oh, and how iOS customers spend more money than those who use other app stores. (So good luck out there, developers!)

But this may not be the best thing for the company to highlight, as it positions Apple’s App Store as the massive, unavoidable juggernaut it is in the industry. And it paints a picture where it’s easy to imagine how difficult it would be on developers who choose to go elsewhere.