There’s always been a gap between how much money Apple’s App Store makes when compared with Google Play. But in the third quarter of 2018, that gap widened considerably – possibly to the widest point yet. According to a new report from Sensor Tower, the App Store earned nearly 93% more than Google Play in the quarter, the largest gap since at least 2014 – or, when Sensor Tower began tracking Google Play data.

The firm says that approximately 66% of the $18.2 billion in mobile app revenue generated in Q3 2018 came from Apple’s App Store. The store made $12 billion in the quarter, up 23.3% from the $9.7 billion it made during the same period last year. 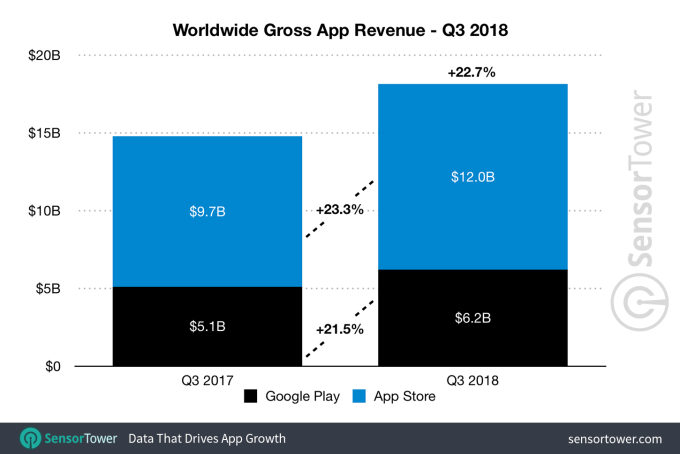 Based on Sensor Tower’s chart of top-grossing apps across both stores, subscriptions are continuing to aid in this revenue growth. Netflix remained the top-grossing non-game app for the third quarter in a row, bringing in an estimated $243.7 million across both platforms. Tinder and Tencent Video remained in the second and third spots, respectively.

Mobile game spending also helped fuel the revenue growth, with spending up 14.9% year-over-year during the quarter to reach $13.8 billion. In fact, it accounted for 76% of all app revenue across both platforms in the quarter, with $8.5 billion coming from the App Store and $5.3 billion from Google Play. 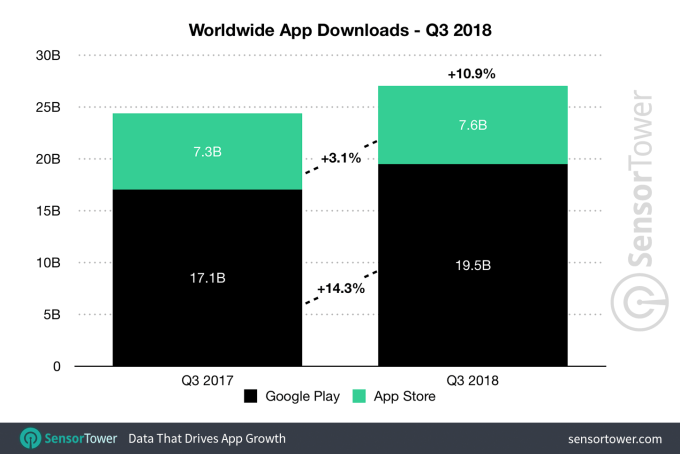 In terms of app downloads, however, Google Play still has the edge thanks to rapid adoption of lower-cost Android devices in emerging markets, the report said. App installs grew 10.9% across both stores, reaching 27.1 billion, up 24.4% from Q3 2017.

The rankings of the most downloaded apps also got a big shakeup in Q3, thanks to Bytedance’s short-video app TikTok absorbing Musical.ly during the quarter. As a result of the merger, it’s now the No. 4 ranked app worldwide, having grown 15% quarter-over-quarter and 440% year-over-year.

That puts it ahead of both Instagram (No. 5) and Snapchat (No. 10), in terms of Q3 app downloads, and sets the stage for Bytedance becoming a more serious player in the social app market. 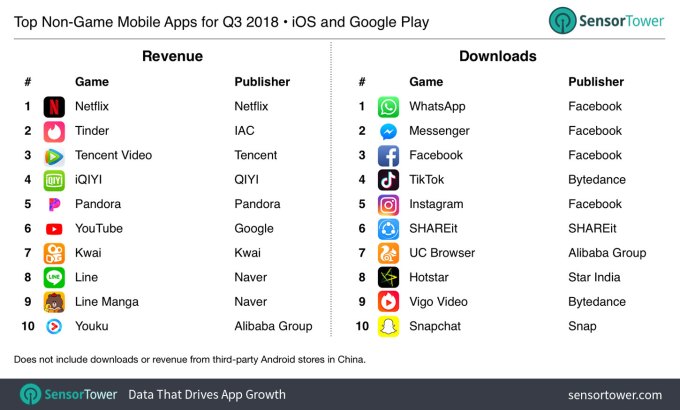