OYO, the fast-growing budget hotel startup out of India that’s backed by Airbnb, SoftBank, Grab and Didi, has made an acquisition to expand its footprint into Europe, specifically around self-catering home rentals. The company has picked up @Leisure Group from Axel Springer for about $415 million (€369.5 million).

Axel Springer had a 51 percent share of the company and said it would be receiving €180 million in the deal, including the repayment of a shareholder loan of around €60 million, and a spokesperson for OYO confirmed to TechCrunch that the full price was €369.5 million.

@Leisure (the @ is a part of its name) sees traffic and business from some 2.8 million travellers annually from across 118 countries. Its European footprint covers some 115,000 homes, and some 300,000 rooms globally

It operates through various sub-brands, including Belvilla, DanCenter, Danland and Traum-Ferienwohnungen, and last year it posted Ebitda of more than €24 million, Axel Springer said.

The German media company, which acquired @Leisure four years ago for an undisclosed sum, also said the divestment is expected to close in June 2019, and will see it focusing more on its jobs and classifieds business as a result.

The deal is the latest big move for OYO, which is now valued at $5 billion, as it continues to expand its footprint outside of its home market, after launches in Japan in recent weeks and China last year.

While companies like Airbnb have expanded into higher end homes and business services, what its investment OYO brings is diversification into another segment of the market. OYO has built its business primarily on budget offerings — and with this deal into middle-class, family travel that’s often also planned on a budget.

That’s a strategy that has appeared to pay off in spades. OYO says it is now the world’s sixth-largest chain of hotels, a place it hopes to advance on the back of raising more than $1 billion in funding since September last year, first in a tranche of $1 billion that included SoftBank’s Vision Fund, and later through a strategic investment from Airbnb, which sources tell us was between $150 million and $200 million. 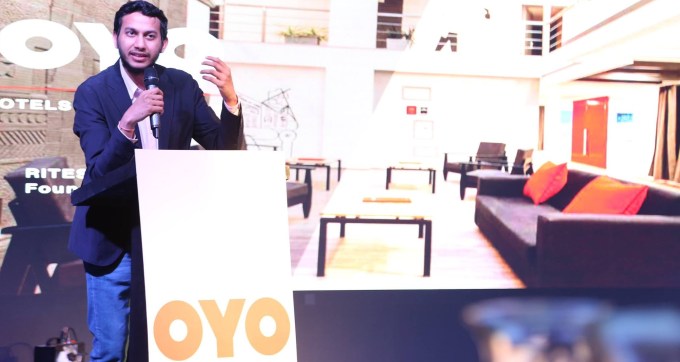 “We see vacation homes as a unique opportunity with 115,000 units of homes now getting added to our already growing count of beautiful homes and we are excited to continue maintaining our global industry leadership,” OYO’s founder and CEO Ritesh Agarwal (pictured above) said in a statement. “Our focus, however, will remain to be a beloved consumer brand that has the ability to create a perfect space in every place. The @Leisure Group is a great partner and we are excited to broad base their offerings. @Leisure Group has proven capabilities in helping develop Europe into a vacation rentals hotspot and we are keen to leverage their competencies towards ensuring beautiful vacation rental and urban homes experience for millions of tourists from every part of the world.”

Tobias Wann, the CEO @Leisure, is becoming CEO of Vacation Homes at OYO as part of the acquisition.

“We are delighted to join forces with OYO in its mission of creating quality and beautiful spaces,” he said in a statement. “@Leisure Group was started with a similar mission to identify and service all forms of vacation & urban home rentals, focusing on delivering a hassle-free experience to both homeowners and guests. I am delighted to share that we’ve successfully achieved that over the past few years, and now aspire to leverage our synergies to deepen our presence in Europe and look to expand globally.”

Europe’s vacation rental market will be worth some $18.6 billion this year, according to estimates, growing at between four and eight percent annually. Now that we are heading into the travel season we are seeing a number of deals emerging to capitalise on the opportunity both within the borders of the region, as well as to tap interest from international tourists coming to Europe. Earlier this week, we confirmed that GetYourGuide, a startup from Berlin that offers listings for tours and other travel experiences, is raising between €300 million and €500 million in funding at a valuation of about $1.6 billion.

Europe has also been an important type of market, in that it’s been one of the big leaders in self-catering vacation home rentals, so for OYO to break into Europe, having a network like this, ready-made rather than built from scratch, is one way to make the move quickly — a sentiment echoed by OYO itself:

“With Europe spearheading the vacation and urban home rental trend globally, @Leisure Group is uniquely positioned to capitalize on its experience and insights aided with OYO’s full stack approach towards building the world’s largest global vacation rentals business,” said OYO chief strategy officer Maninder Gulati in a statement. “If one were to look at Europe alone, there is an ever-increasing demand for vacation homes with an increasing trend of booking an entire home. Further, in such a market of largely fragmented small and independent players, and a handful of established players, of which @Leisure Group, is one of the largest, we feel travelers will be excited with what @Leisure Group can offer. Through this acquisition, the size and scale of the opportunity can be immediately unlocked for OYO’s Homes business.”

The deal will give OYO a big boost from its existing footprint, which had covered 800 cities in 24 countries, including the UK, US, India, China, Malaysia, Nepal, UAE, Indonesia, Saudi Arabia, the Philippines and Japan. It already had 18,000 buildings and 636,000 units under management, along with  40,000-holiday homes. Other investors in it include Sequoia Capital, Lightspeed Ventures, Hero Enterprise, and China Lodging Group.