Is reading the news feeling a little stressful today? Can’t imagine why. Don’t worry: you’re not alone. A Pew Research study found that seven of 10 Americans today suffer from “news fatigue” — meaning they feel worn out and like they can’t keep up. Meanwhile, an APA survey found that 56 percent of Americans want to stay informed, but it stresses them out. A new app called Sift, launching today, wants to help. Instead of trying to overwhelm news consumers with breaking news and incremental updates, it aims to thoughtfully approach tough topics in order to encourage a deeper understanding of the issues.

The app will tackle the big issues du jour — like immigration, healthcare and climate change, for example — which are released in a series on a subscription basis. For each topic, Sift will examine the backstory and history of the issue. And each section will include interactive features — like polls, sliders and other data visualizations — that promote critical thinking skills and keep users engaged while they learn. 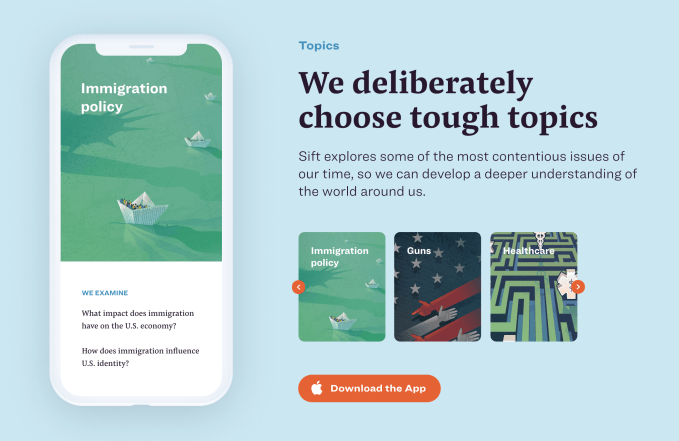 The app also avoids inflammatory language in presenting the facts, allowing users time to reflect rather than react. And all the sources are linked so users can dig into the supporting material.

According to Sift co-founder Gabe Campodonico, the goal was to come up with a concept for an app that would allow people to stay informed while reducing anxiety and stress.

“We built Sift to be an active learning experience that engages more of your brain — a tool for people to interact with, trust, and learn from. And one that doesn’t have to live within a distracted ecosystem of noisy newsfeeds and headlines competing for attention,” he explained.

The original concept began over two years ago, and has gone through several iterations.

The team earlier tested a reference product — but it ended up feeling too much like Wikipedia. They also tried a digital news magazine, but didn’t feel it offered anything new. And they tested a gamified education product, but felt it lacked substance.

Eventually they landed on the idea for Sift, which they call an “experiment in news therapy.”

In October 2018, Sift launched its first topic: the U.S. immigration policy and its impact on the economy and cultural identity. The company tested the topic with a group of users over a couple of months. Users in the initial experiment, reported feeling 30% less anxious, 33% less overwhelmed, and 22% more informed than they did before they used Sift.

These numbers, of course, could be better — but they’re potentially an improvement over how it feels today to get the news from other media sources. (Not that they quantify how their coverage impacts readers’ emotions.)

Today, Sift is launching its first, full series for the price of $19.99 for a six-month subscription. The business model was chosen so the app won’t have to include ads or other distractions, nor will it use data targeting. Each week, the app will release a new topic, beginning with immigration, then guns, healthcare, education, climate change and media literacy.

Part one of each topic will look to the past to set the foundation, and part two will look at potential solutions and ways to move forward.

The app is produced by former Evernote CEO Phil Libin’s AI-focused startup studio All Turtles, but it doesn’t use AI as it had originally planned. In fact, the team found that AI was part of the problem. As the Sift website explains, its user research showed that “users value human curation, not based on algorithms that clutter news consumption.”

It’s interesting that Sift is positioning itself almost as a self-care app, but for news consumption. The idea that we should take time for ourselves, reduce our stress, meditate and prioritize our mental health and wellness is a more modern concept — one attributed to the millennial and Gen Z demographic, who have grown up in the always-on digital age. These concepts have led to a booming self-care market, where the top apps are raking in multi-millions annually.

News organizations, by comparison, often struggle. Over the course of 2018, media businesses saw numerous layoffs, hiring freezes and shutdowns. But subscription-based publications can be a bright spot — as with The NYT hitting a 13-year high, or Apple rounding up all-you-can-eat news into a subscription add-on for Apple News.

Sift aims to appeal to both markets: those who want quality news by subscription, and those focused on self-care.

Whether either of these demographics at all overlap with the crowd of news consumers who actually need more education and time to reflect, however, remains to be seen.

The app is a free download on the App Store.