Accounts can be suspended for a range of activity, including spam, being a fake account, security risks (like hacked accounts) and abusive tweets or behavior such as sending threats or impersonating other accounts. (The latter, which Twitter itself recently did as a joke. Ha ha ha. How hilarious to send 2FA codes over DM!)

We move quickly to enforce our rules, but sometimes we don’t have the full context and can make mistakes.

To fix that, we added a way for people to appeal our decision in the app and have been able to get back to people 60% faster than before. pic.twitter.com/0BWBnff9lt

Now, instead of having to locate the online form to start an appeal, users can instead choose to appeal from within the Twitter app itself the tweet in violation.

Twitter claims it’s now able to get back to people 60 percent faster as a result.

The new process involves Twitter displaying the tweet in violation and the reason why it determined the tweet broke its rules, along with a description of the rule in question and a link to the policy. On the next screen, users can either choose to remove the tweet that violates Twitter’s rules or they can appeal the violation. 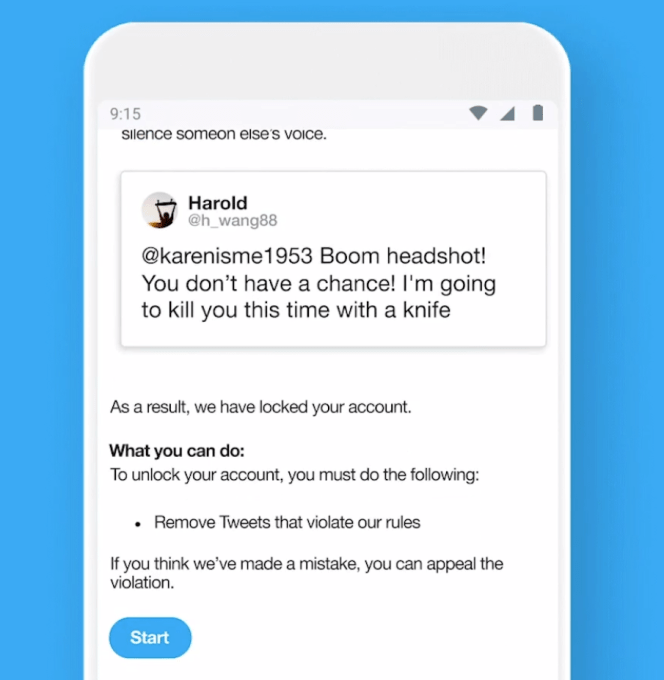 Of course, an appeal doesn’t immediately restore access to your Twitter account, if suspended — you’ll still have to wait for Twitter’s ruling. If that goes on for too long, you can return to cancel the appeal and just delete the tweet instead at any time to regain access to your account.

But if you proceed to appeal the tweet, you can explain why the tweet was mistakenly flagged.

In an example Twitter showed off today, a user posted what appeared to be a violent threat but was really just an inside joke about a video game, they explained. 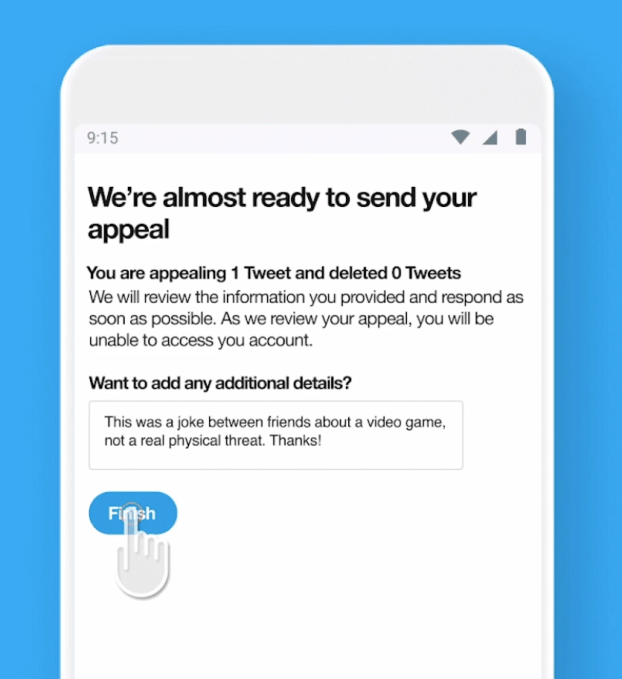 The addition is a small change to the larger and much more complex process of handling the tweets that are in violation of Twitter’s rules. That’s an area where Twitter has been heavily criticized as it has been unable to get a handle on rampant harassment and abuse despite evolving its rules and policies to cover a range of bad behavior.

In an effort to better explain its decisions, the company recently said it will develop new ways to label tweets that violated its abuse terms, so those who come across them have a better understanding of the context when those tweets aren’t taken down. For example, tweets posted by public figures that aren’t direct violent threats — but are in “the public interest” — might remain, but be labeled.

Twitter also changed the way it displayed reported tweets, so people could understand why enforcement actions had been taken.

And it’s working on more dramatic changes to its app — like giving users the ability to hide the @replies they don’t like.