Onstage at GDC, Google CEO Sundar Pichai announced the company’s latest big initiative, taking on the entire gaming industry with a live-streaming service called Stadia that will be launching this year.

The service will let gamers leave their hefty GPUs and expensive systems behind. Pichai says that the service can be used on devices with a Chrome browser and an internet connection. To Google that means Stadia will launch on desktops, laptops, TVs, tablets and phones. The service will work across platforms, so you won’t just be competing with other Stadia users.

At launch, Stadia will support 4K at 60fps, with surround sound and HDR. They say they are also working on 8K 120fps support in “the future.” The stat we’re waiting to hear about is latency and what sort of ranges the service has been hitting ahead of launch.

The company showed off a dedicated Stadia controller, though you’ll also be able to use your existing third-party controllers or keyboard and mouse.

Speaking of hardware, Google has partnered with AMD to create a custom high-end GPU for Stadia that the company says pushes more than 10.7 teraflops, dwarfing the GPU output of both the Xbox One X and PS4 Pro. 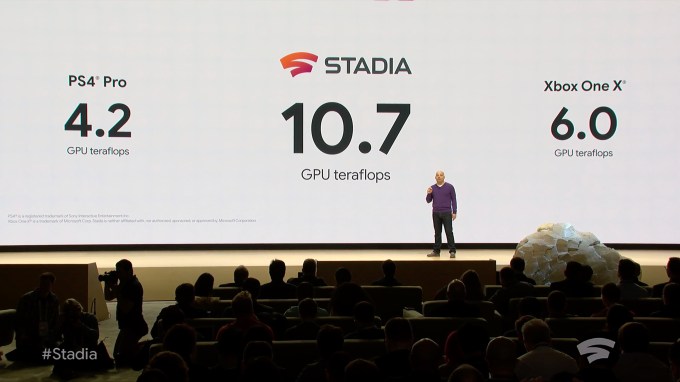 When it comes to gaming, Google is an underdog here, though the company obviously has a massive mobile gaming platform with Android. When it comes to desktop gaming, the tech giant doesn’t have a ton of background, aside from their sporadic efforts on PC virtual reality. One would imagine that Microsoft or Valve are the best positioned here, but Google has some pretty heavy mindshare with YouTube Gaming and some pretty heavy infrastructure with Google’s data centers.

Viewers will be able to move from YouTube directly into gameplay without any downloads just by clicking a “Play Now” button. Google says this process can take as little as five seconds.

Google certainly has ample reason to want gamers to move away from Windows PCs to systems with more lightweight onboard compute. The idea of running something heavier than minesweeper-equivalents on a Chromebook can be pretty interesting; the idea of doing that across all of your devices could be game-changing.

No word on exact release timing or pricing, so we’ve still got some questions here, though Google says they’ll have more details around their I/O developer conference.