At CES 2019 in Las Vegas in January, Twitter announced it was developing new tools that would make it easier for publishers to better understand what sort of content is resonating with their readers. Through a new analytics dashboard, publishers would be able to see who’s engaging with content and when, and what’s performing well. Today, the company unveiled the first of these efforts: a set of Publisher Insights tools within Media Studio focused on the best time to publish video.

Twitter announced the tools on its Media blog this morning, and the publisher tools themselves are also now live.

While at CES, Twitter described this analytics dashboard as an “early concept,” but today’s final result looks very much like what the company had shown off then.

On the dashboard, the hours of the day are across the x-axis, and the days of the week are across the y-axis. The graph uses shades of gray to show which days and times video tweets see the most engagement, based on historical data. 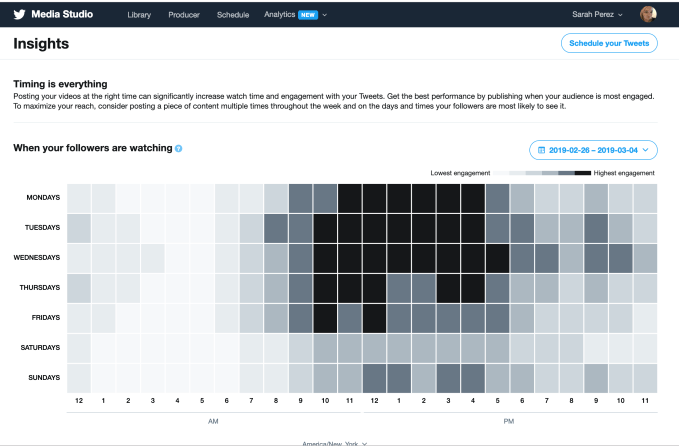 Twitter says publishers can use this dashboard to determine when is the best time to post video to “maximize engagement, conversation, and viewership.” However, it notes the graph doesn’t show when your followers are watching your videos, but when they’re watching videos across Twitter.

Twitter’s advice, naturally, is to post at least some video during the most engaging times of the day. And if that’s at an off-hour for you, the company is also now offering a tweet scheduling tool from the same page featuring the new dashboard.

Publishers can adjust the time frame for the insights to “last week,” “this month,” “last month” or any custom range of their choosing to gain more insights. 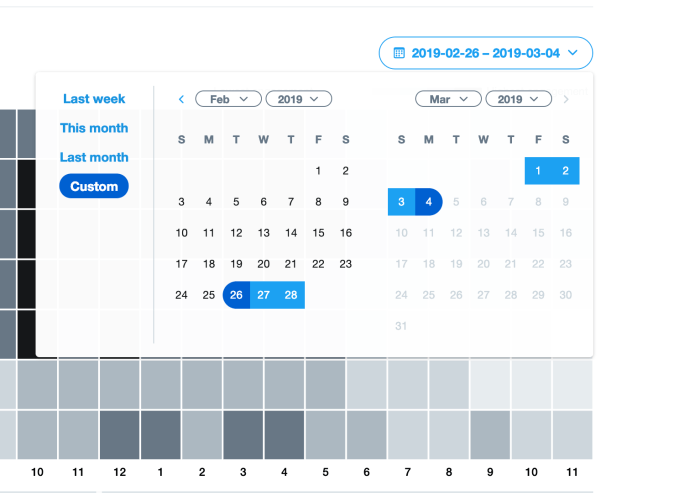 The company’s larger goal with helping publishers better develop their media strategies on Twitter ties to its advertising business. Twitter has said for some time that video ads account for more than half its ad revenue — a metric that was repeated by Twitter VP of content partnerships, Kay Madati, in January.

Twitter also says other tools aimed at giving publishers more actionable data are in the works. Similarly, those will go live in Media Studio (studio.twitter.com) when available.