Google today is introducing a new way for Android developers to generate revenue from their mobile applications. And no, it’s not subscription-related. Instead, the company is launching a new monetization option for apps called “Rewarded Products.” This will allow non-paying app users to contribute to an app’s revenue stream by sacrificing their time, but not their money. The first product will be rewarded video, where users can opt to watch a video ad in exchange for in-game currency, virtual goods or other benefits.

The feature may make developers happy, but it remains to be seen how users react. Reception will depend on how the videos are introduced in the app.

Even in Google’s example of the rewarded product in action — meant to showcase a best-design practice, one would think — the video interrupts gameplay between levels with a full-screen takeover. This is not a scenario users would respond well to unless this was presented as the only way to play a popular, previously paid-only game for free, perhaps.

Rewarded video has worked for some apps where users have come to expect a free product. That could include free-to-play games or other services where subscribing is an option, not a requirement.

For example, Pandora’s music streaming service was free and ad-supported for years, as it was radio-only. After it introduced tiers offering on-demand streaming to compete with Spotify, it rolled out a rewarded video product — so to speak — of its own. Today, Pandora listeners can choose to watch a video ad to access on-demand music for a session as an alternative to paying a monthly subscription.

Android app developers, of course, are already using advertisements to supplement, or as a means of, monetization, but this launch creates an official Google Play “product.” This makes implementation easier on developers and gives Google a way to compete with third parties offering something similar.

Rewarded products can be added to any app using the Google Play Billing Library or AIDL interface with only a few additional API calls, the company says. It won’t require an SDK. 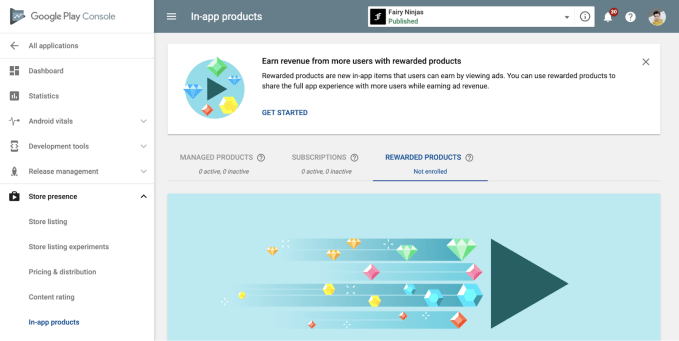 The launch comes at a time when Apple has been seeing success with subscriptions, which it has fully embraced, pushed and sometimes even let run amok. Subscriptions are now one of the biggest factors, outside of games, in app store revenue growth.

But Android users, historically, have been more averse to paying for apps than those on iOS. Apple’s store has even seen nearly double that of Google Play in terms of revenue — despite having far fewer downloads. That means Android developers will not be able to tap into the subscription craze at the same scale as their iOS counterparts. And it means cross-platform developers may further prioritize building for iOS, as a result.

Rewarded products offer those developers an alternative path to monetization on a platform where that’s often been more difficult, outside of running ads.

Google says the rewarded video product is launching into open beta, and is available in the Play Console for developers.