Mobile intelligence and data firm App Annie is today releasing its 2019 predictions for the worldwide app economy, including its forecast around consumer spending, gaming, the subscription market and other highlights. Most notably, it expects the worldwide gross consumer spend in apps — meaning before the app stores take their own cut — to surpass $122 billion next year, which is double the size of the global box office market, for comparison’s sake.

According to the new forecast, the worldwide app store consumer spend will grow five times as fast as the overall global economy next year.

But the forecast also notes that “consumer spend” — which refers to the money consumers spend on apps and through in-app purchases — is only one metric to track the apps stores’ growth and revenue potential. 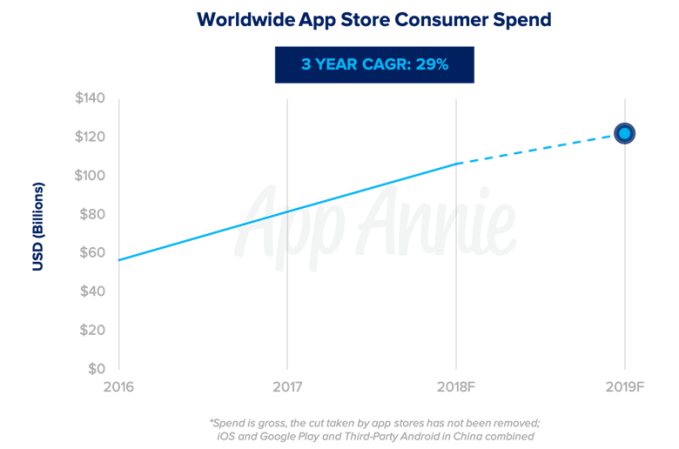 Mobile spending is also expected to continue growing for both in-app advertising and commerce — that is, the transactions that take place outside of the app stores in apps like Uber, Amazon and Starbucks, for example.

Specifically, mobile will account for 62 percent of global digital ad spend in 2019, representing $155 billion, up from 50 percent in 2017. In addition, 60 percent more mobile apps will monetize through in-app ads in 2019. 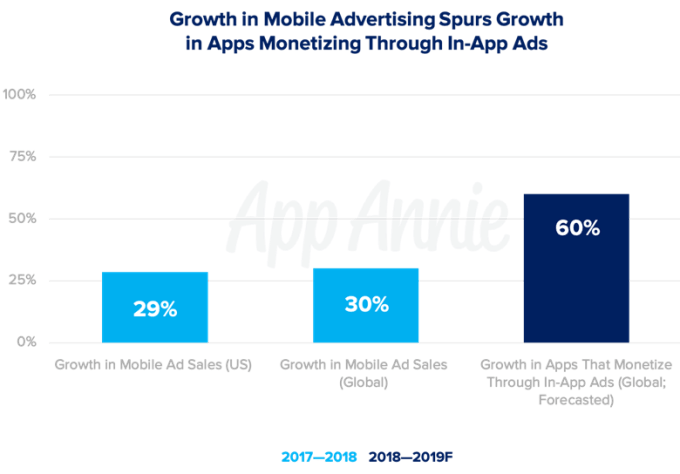 As in previous years, mobile gaming is contributing to the bulk of the growth in consumer spending.

Consumer spend in mobile gaming will reach 60 percent market share among all gaming platforms including PC/Mac, console, handheld and mobile, the report says.

Mobile gaming, which continues to be the fastest growing form of gaming, matured further this year with apps like Fortnite and PUBG, says App Annie. These games “drove multiplayer game mechanics that put them on par with real-time strategy and shooter games on PC/Mac and Consoles in a way that hadn’t been done before,” the firm said.

They also helped push forward a trend toward cross-platform gaming, and App Annie expects that to continue in 2019 with more games becoming less siloed.

However, the gaming market won’t just be growing because of experiences like PUBG and Fortnite. “Hyper-casual” games — that is, those with very simple gameplay — will also drive download growth in 2019. 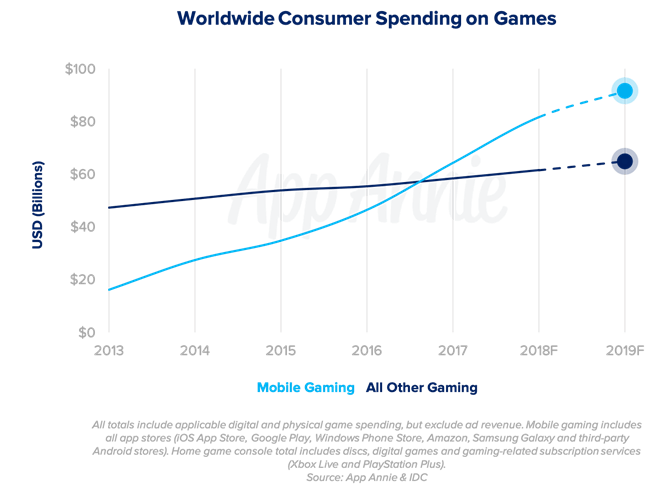 China will remain a major contributor to overall app store consumer spend, including mobile gaming, but there may be a slight deceleration of their impact next year due to the game licensing freeze. In August, Bloomberg reported China’s regulators froze approval of game licenses amid a government shake-up. The freeze impacted the entire sector, from large players like internet giant Tencent to smaller developers.

If the freeze continues in 2019, App Annie believes Chinese firms will push toward international expansion and M&A activity could result.

But App Annie isn’t going so far as to predict Harry Potter will do better than Pokémon GO, which tapped into consumer nostalgia and was a first-to-market mainstream AR gaming title. 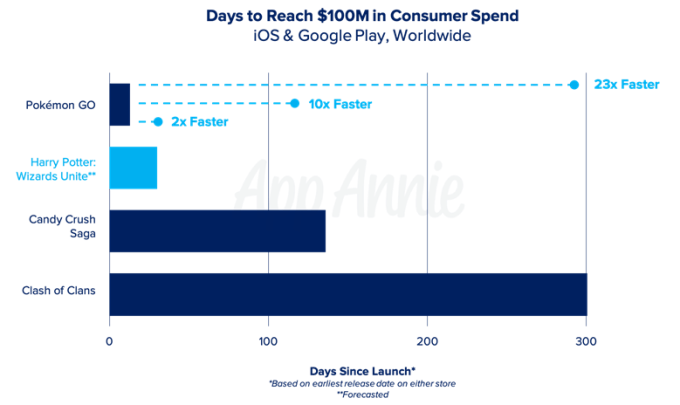 Another significant trend ahead for the new year is the growth in video streaming apps, fueled by in-app subscriptions.

Today, the average person consumers more than 7.5 hours of media per day, including watching, listening, reading or posting. Next year, 10 minutes of every hour spent consuming media across TV and internet will come from streaming video on mobile, the forecast says.

The total time in video streaming apps will increase 110 percent from 2016 to 2019, with consumer spend in entertainment apps up by 520 percent over that same period. Most of those revenues will come from the growth in in-app subscriptions. 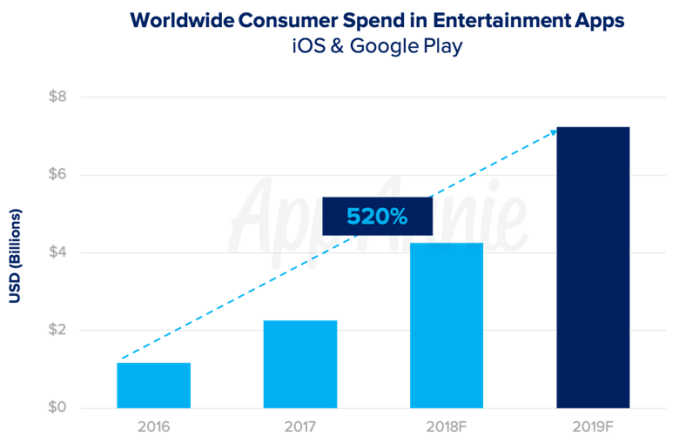 YouTube alone accounts for 4 out of every 5 minutes spent in the top 10 video streaming apps, today. But 2019 will see many changes, including the launch of Disney’s streaming service, Disney+, for example.

App Annie’s full report, which details ad creatives and strategies as well, is available on its blog.