YouTube is expanding the test of its “Explore” feature, a new discovery tool it first introduced as an experiment within its iPhone app last year. Similar to Instagram’s Explore page, the new YouTube feature aims to introduce users to a diverse set of personalized recommendations so they can more easily find something new to watch. The test is now available across devices, and has been updated to also suggest smaller, up-and-coming YouTube creators, the company says.

The changes to Explore were announced in a recent Creator Insiders video, where the company shares ideas it’s thinking about or testing ahead of a public debut — like a change to the “dislike” button, for example.

Last year, the company published a video to Creator Insiders where it talked about a plan to develop a new place within the YouTube app that would help people broaden their horizons when looking for something different to watch.

Today, YouTube’s recommendation technology relies heavily on past viewing activity and other in-app behavior to make its content suggestions, the company explained. With the Explore tab, however, YouTube aims to widen recommendations to include various topics, videos and channels you may not have otherwise encountered. 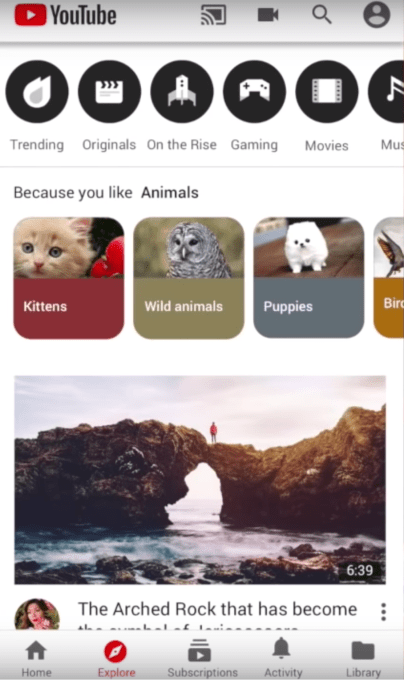 When YouTube launched Explore last year, the test was only rolled out to 1 percent of YouTube’s iPhone app users.

On testers’ devices, Explore replaces the Trending tab in the app’s navigation at the bottom of the screen. The section of Trending videos then became just another sub-category within Explore, alongside other top-level sections like Gaming, Movies, Music, Originals and more.

While Explore was initially available only to iPhone users, the test has now gone live across devices, including iPhones, iPads, Android phones and tablets and on the desktop, YouTube confirmed to TechCrunch. But it’s still only available to a “small amount” of testers, the company says. 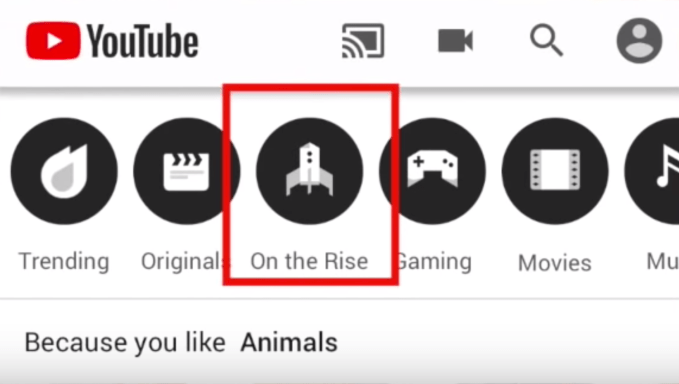 In addition, Explore has been updated to include a new section called “On the Rise,” which will feature up-and-coming YouTube creators.

Here, a shelf is shown showcasing creators with fewer than 10,000 subscribers. These suggestions are personalized to you, too, based on which channels you currently like and regularly watch.

Beneath the “Under 10K” section are other creators YouTube thinks you’ll like, based on your YouTube watch history as well as those whose channels are watched by other fans of your favorite creators. 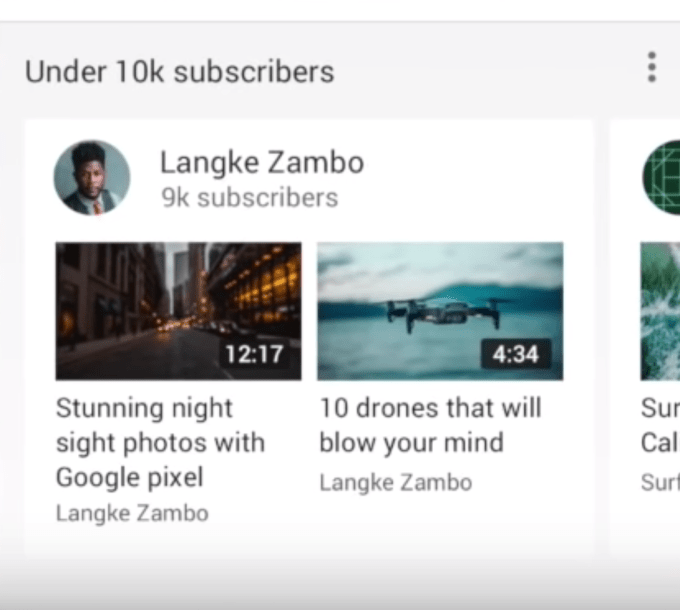 These recommendations may include those channels with more than 10,000 subscribers, but there will be a cap on how many subscribers a creator can have to be categorized within this “On the Rise” section. (That cap is still TBD, though.)

We understand that while YouTube has expanded the experiment’s reach, it doesn’t yet have a definitive plan for rolling out to the public the Explore tab.

For now, Explore is still considered an experiment and the company is looking to gather more feedback before making a formal decision about the feature’s wider availability.