YouTube CEO Susan Wojcicki on Friday promised the company would do a better job with communicating to creators about its experiments and tests. Today, YouTube is making good on that commitment with an update about a new feature it’s testing out: an Explore tab, aimed at offering viewers a more diverse set of video recommendations.

The news was announced via the Creator Insider channel – the same channel Wojcicki highlighted in her recent update as the “unofficial” resource operated by YouTube employees. The channel today offers weekly updates, responses to creator feedback, and behind-the-scenes info on product launches.

According to the announcement, the new Explore feature is currently in testing with just 1 percent of iPhone YouTube app viewers, so there’s a good chance you won’t see the option in your own app.

However, if you do happen to be in the test group, then you’ll notice the bottom navigation bar of the app looks different. Instead of the tabs Home, Trending, Subscriptions, Inbox and Library, you’ll instead see Home, Explore, Subscriptions, Activity and Library. 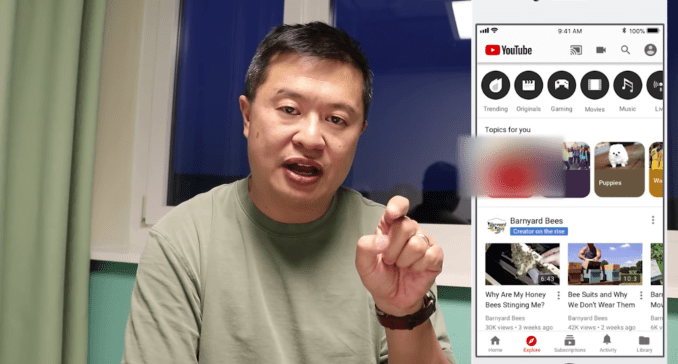 The idea behind Explore is to offer YouTube viewers a wider variety of what-to-watch suggestions than what they have today. Currently, personalized video recommendations are very much influenced by past viewing activity and other behavior, which can then create a sort of homogenous selection of recommended content.

“Explore is designed to help you be exposed to different kinds of topics, videos or channels that you might not otherwise encounter, but they’re still personalized,” said Tom Leung, Director of Product Management, in a YouTube video.

That is, the videos are still based on viewing activity.

For example, he explains, a viewer who was watching videos about telescopes might be recommended videos about high-end cameras.

“It’s just going to give you a little more variety,” says Leung.

The tab will also feature a “Trending” section at the top of the screen, which directs users to the same sort of content that’s found in the Trending tab in the current version of the YouTube app.

The hope, however, with the new Explore tab is to offer creators the ability to reach more viewers, even if their content doesn’t “trend.”

Whether or not that theory proves true, remains to be seen. YouTube will review the data from the experiment before making a decision to roll out the Explore tab to more users.

Early feedback from YouTube creators in the comments section of the video seems cautiously optimistic, with many expressing hopes that the new tab would provide exposure to smaller creators rather than just the well-known names.

Calling the tab “Explore” makes sense in light of the increased threat from Instagram, whose own Explore section features personalized video suggestions, and has launched a YouTube rival with IGTV. YouTube has responded by offering its stars big, five to six-figure checks to post their best stuff on YouTube, according to Business Insider. (YouTube downplayed the report, saying it has “always invested” in creators’ success.)

But an experiment involving YouTube’s own Explore section makes it clear that the company is interested taking on Instagram head-on when it comes to offering a home for discovering new video content through algorithmic recommendations.

If successful, YouTube’s Explore tab would connect viewers to more creator channels they’ll like and subscribe to, as well as increase their time spent in app. That, in turn, could potentially decrease viewers’ time in apps like IGTV, Facebook, Instagram and elsewhere.