Choose Your Own Adventure-style stories have been making a comeback, thanks to Netflix’s adoption of the format for kids TV and other interactive tales, like “Black Mirror: Bandersnatch,” as well as earlier efforts, like HBO’s Mosaic. Now Amazon is testing out the genre for Alexa devices, with the launch of professionally performed, voice-controlled narratives from the publisher of the original Choose Your Own Adventure book series, ChooseCo.

You may remember ChooseCo from its lawsuit with Netflix over the Black Mirror episode. The company claims that Netflix never acquired the proper license to use the “Choose Your Own Adventure” trademark.

But clearly, ChooseCo still aims to benefit from the attention, and from Netflix’s ability to make this storytelling gimmick popular with a younger generation of tech-savvy consumers.

In collaboration with Amazon’s Audible division, the two companies are together releasing an Alexa skill (properly licensed) that will bring ChooseCo’s Choose Your Own Adventure stories to life on Alexa-powered devices, like Echo smart speakers, which are controlled through voice commands. 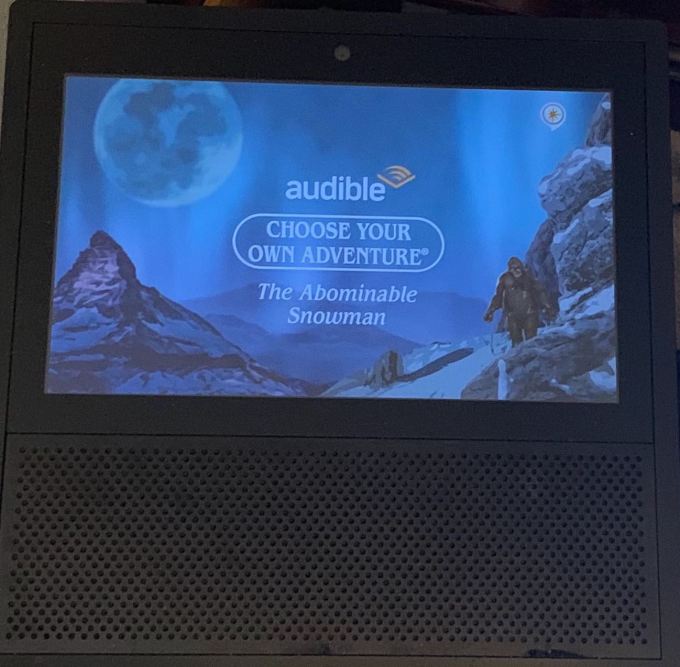 The voice skill itself was jointly designed by Audible, ChooseCo and the Alexa team, and will launch with two narratives to start: “The Abominable Snowman,” which takes listeners to the peaks of the Himalayas in search of the yeti, and “Journey Under the Sea,” which ventures to the underwater Lost City of Atlantis.

The former offers 28 total endings and the latter offers 37.

Instead of Alexa’s robotic voice, the stories are narrated by voice actors Josh Hurley (Abominable Snowman) and Stephanie Einstein (Journey Under the Sea.)

Those of a certain age will remember reading Choose Your Own Adventure stories as kids, but these Alexa versions are meant to entertain all ages, Audible claims. Of course, it’s debatable how often adults will want to listen to fantastic but familiar tales like this, after satisfying their initial curiosity following the format’s smart speaker debut.

The stories will vary in length, depending on which narrative branch listeners take, but can provide “hours” of entertainment, Audible tells TechCrunch. In addition to responding to the questions about what to do next, you also can use voice commands like “go back,” “start over” and “change story” to navigate the app.

Currently, the stories are free, as is the skill. Audible declined to say if a subscription or in-app purchases would be offered at a later date in order to provide listeners with access to more stories. Likely, the skill’s future is still being considered — for now, the companies are looking to see if consumers adopt and engage with the format on voice devices, or if the skill flops.

If the stories take off, however, others could be sold or Amazon could even opt to bundle the stories into its Audible Channels offering, which is used to entice Prime subscriber sign-ups.

To try the stories yourself, you can say “Alexa, open Choose Your Own Adventure from Audible.” This will enable the skill so you can get started.

The stories begin with a warning similar to those you might remember from the kids’ books — that this story is different, and that “you alone are in charge of what happens.” It warns that there are dangers, adventures and consequences ahead, and that your choices could “end in disaster…or even death!”

The stories then progress as you’d expect, with a bit of narrative before asking you to pick the next path. On Alexa devices with a screen, some simple illustrations are shown.

Audible’s new Choose Your Own Adventure stories aren’t the only example of this format coming to audio. In addition to ChooseCo’s own online audio-based games, there’s also a comedy game show that uses the format, and The NYT even tried a choose-your-own-news adventure in 2017. There also are skills for interactive stories that aren’t using the ChooseCo trademark.

The official Audible skill is here on the Alexa Skills store.