What if a mystery TV series let you decide to follow one character’s story to the end, or jump between characters as the action unfolds? That’s the idea behind Mosaic, a 3-year, $20 million project by the acclaimed director of Traffic and Ocean’s 11, Steven Soderbergh. Today, HBO launches the Mosaic app for iOS and Apple TV that allows viewers to decide the viewing order of a 7.5-hour murder mystery mini-series of the same name starring Sharon Stone. Soderbergh has two more made-for-Mosaic series on the way, and plans to open up the platform to other filmmakers.

“The outcome and the events of the story don’t change based on your choices” says Soderbergh who avoided making Mosaic an overly complicated video game. “It’s merely what information do you have about the story based on what you’ve been following.’ Some people like to just keep making choices and get to the end of a path, some people like to mine sweep” jumping between separate characters in chronological order.

On January 22nd, HBO will air a 6-hour linear cut of the Mosaic series that follows how two men interweave themselves with author Olivia Lake, played by Stone. But on iPhone, iPad, Apple TV, and soon Android devices and the web, users can explore the story at their own pace. The branching narrative lets you choose which scene to watch next when you complete one. And along the way, you unlock appendices call Discoveries that let you watch extra clips, listen to voicemails, and look at documents to dive deeper into a part of the story beyond the central narrative

For an easy analogy, imagine how you can basically watch the first few Marvel superhero movies like The Incredible Hulk and Captain America in any order, but they all lead to The Avengers. You have choice, but not enough to disturb the overarching story. That separates Mosaic from Netflix’s true choose-your-own-adventure shows for kids that debuted earlier this year, or TellTale’s Walking Dead story games. 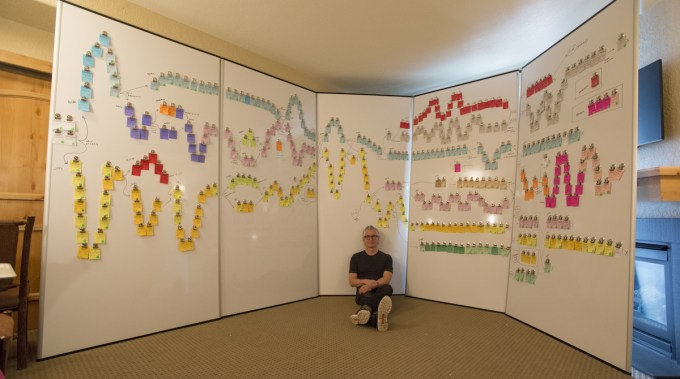 Originally Soderbergh had scripted over 40 different content nodes for the app, but tightened Mosaic up to around 15 so the decisions don’t feel as arbitrary or like a chore. “I’m not a gamer. I want to be told a story” he tells me. “I didn’t know what to watch to get ready for this. So we just kind of started” he laughs, noting how useful it was to work closely with the tech team to flesh out the Mosaic story and app in tandem.

HBO bankrolled the Mosaic app’s development by tech company PodOp as part of producing the series. PodOp filed 14 patents during the process, and built storyboard management and analytics tools to help Soderbergh tell the winding tale and see how audiences respond. “We’re still in the early days of figuring out ‘what do we do with this?'” says Soderbergh. “I want PodOp to become Pixar. We’re going to be the Pixar of branching narrative.”

Soderbergh says “I looked at this as sort of an open source format that other filmmakers can come in and push.” Beyond the next two Mosaic titles he’s making, it’s unclear if other creators will launch their own separate apps based on the Mosaic tech, or if today’s app will become a hub for viewing or even buying this branching narrative content.

Playing around with Mosaic, the app seemed well crafted and relatively intuitive. The Discoveries let you “go down a rabbit hole If you want”, as Soderbergh says, like a fantasy novel with its own glossary or map. Anyone used to video games where your decisions impact the ending might find Mosaic’s unresponsiveness a bit frustrating. 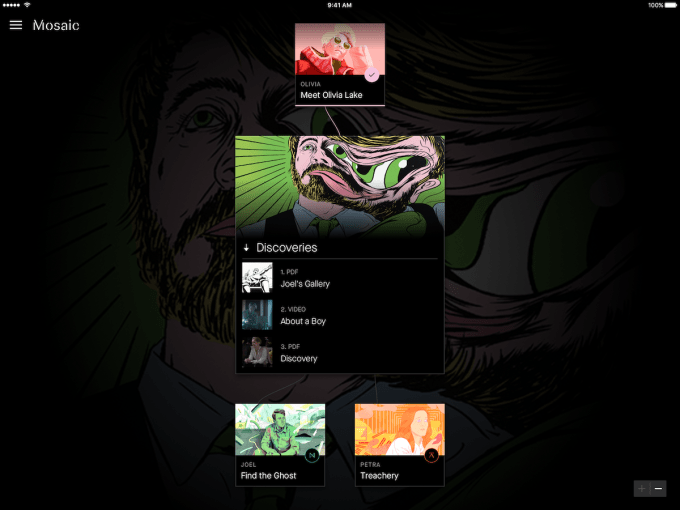 You’re still just an audience member, even with a bit more agency. And the plot resolves factually, rather than having you see the same story completely subjectively from different perspectives. “One character confronts another character, but he’s scared of her, and he perceives himself to be in jeopardy. But if you follow her line, you realize she’s trying to help him” explains Mosaic’s writer Ed Solomon. “Every villain is the hero of their own story. This forced me to think of every character as being worthy of their own movie.”

If television and film are going to keep up with the world’s of web video and gaming, they’ll need to evolve beyond the strict broadcast format. When you have a hand in how the story plays out, you feel more emotionally tied to the outcome.