If you’ve ever enthusiastically sent your spit off in the mail, you were probably anxious for whatever unexpected insights the current crop of DNA testing companies would send back. Did your ancestors hang out on the Iberian peninsula? What version of your particular family lore does the science support?

Most people who participate in mail-order DNA testing don’t think to question the science behind the results — it’s science after all. But because DNA testing companies lack aggressive oversight and play their algorithms close to the chest, the gems of genealogical insight users hope to glean can be more impressionistic than most of these companies let on.

As CBC reports, “Despite having virtually identical DNA, the twins did not receive matching results from any of the companies.” That bit shouldn’t come as a surprise. Each company uses its own special sauce to analyze DNA, so it’s natural that there would be differences. For example, one company, FamilyTreeDNA, attributed 14 percent of the twins’ DNA to the Middle East, unlike the other four sets of results.

Beyond that, most results were pretty predictable — but things got a bit weird with the 23andMe data.

According to 23andMe’s findings, Charlsie has nearly 10 per cent less “broadly European” ancestry than Carly. She also has French and German ancestry (2.6 per cent) that her sister doesn’t share. 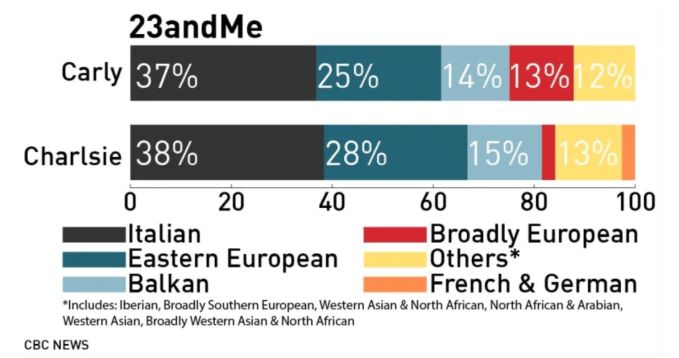 The twins shared their DNA with a computational biology group at Yale, which verified that the DNA they sent off was statistically pretty much identical. When questioned for the story, 23andMe noted that its analyses are “statistical estimates” — a phrase that customers should bear in mind.

It’s worth remembering that the study isn’t proper science. With no control group and an n (sample size) of one set of twins, nothing definitive can be gleaned here. But it certainly raises some interesting questions.

Update: A 23andMe spokesperson provided the following statement to TechCrunch to contextualize the results in question:

The variance in Charlsie’s and Carly’s 23andMe results are primarily within the “Broadly European” estimate. This category captures segments our algorithm could confidently identify as European, but not confidently classify more precisely, into countries for example. It’s not inconsistent for one twin to have more “Broadly European” than the other. It means that for one individual the algorithm was not confident enough to make more granular predictions. For example, for one twin we were able to identify 2.6% French and German, whereas for the other that portion of the genome was assigned to Broadly European.

The company also emphasized “the distinction that [23andMe’s] ancestry testing is different from our health report testing, which is regulated by the FDA and meets the agency’s standards for accuracy and clinical validity.”

Twin studies have played a vital role in scientific research for ages. Often, twin studies allow researchers to explore the effects of biology against those of the environment across any number of traits — addiction, mental illness, heart disease and so on. In the case of companies like 23andMe, twin studies could shed a bit of light on the secret algorithms that drive user insights and revenue.

Beyond analyzing the cold, hard facts of your DNA, companies like 23andMe attract users with promises of “reports” on everything from genetic health risks to obscure geographic corners of a family tree. Most users don’t care about the raw data — they’re after the fluffier, qualitative stuff. The qualitative reporting is where companies can riff a bit, providing a DNA-based “personal wellness coach” or advice about whether you’re meant to be a morning person or a night owl.

Given the way these DNA services work, their ancestry results are surprisingly malleable over time. As 23andMe notes, “because these results reflect the ancestries of individuals currently in our reference database, expect to see your results change over time as that database grows.” As many non-white DNA testing customers have found, many results aren’t nearly as dialed in for anyone with most of their roots beyond Europe. Over time, as more people of color participate, the pool of relevant DNA grows.

Again, the CBC’s casual experiment is by no means definitive science — but neither are DNA testing services. For anyone waiting with bated breath for their test results, remember that there’s still a lot we don’t know about how these companies come to their conclusions. Given the considerable privacy trade-off in handing over your genetic material to big pharma through a for-profit intermediary, it’s just some food for thought.

23andMe’s ancestry tools are getting better for people of color