Short-form video app TikTok has been growing in popularity across international markets, including in the U.S. where a merger with Musical.ly has seen the app topping the App Store charts. Facebook and Snapchat have been hastily trying to copy TikTok’s features as a result. A part of TikTok’s ambitious global expansion plan has been its more recent targeting of emerging markets — like India and Indonesia — where the company’s quietly launched “TikTok Lite” app has been gaining ground in the latter half of 2018.

TikTok hasn’t yet made much fuss over its Lite version, which actually consists of two separate apps.

The first was launched on August 6, 2018 in Thailand, but is now available across other primarily Asian markets, including Indonesia, where it’s most popular, as well as Vietnam, Malaysia and the Philippines.

This version of TikTok Lite has grown to 5 million installs since its August debut. (It’s actually written with a lowercase “l” in “Lite” in the Play store, which is how you can tell the difference between this and the other app.)

This version was also briefly live in India, Brazil and Russia, but now these countries are served by a separate Lite app (written as “Lite” with an uppercase “L”), which launched on November 1, 2018.

This second version of TikTok Lite has now become the larger of the two, thanks to India. It has around 7.1 million total downloads, according to Sensor Tower data.

However, TikTok Lite is not being heavily promoted at this time — especially when compared with the outsize marketing that TikTok’s flagship app has been seeing as of late.

This advertising is courtesy of TikTok’s Chinese parent company, ByteDance, which has had an infusion of billions in outside capital recently. The company is valued at $78 billion, as of October.

More expensive promotion of #TikTok, this time in #Dubai. That 3 billion from #Softbank won't last long at this rate #Bytedance 🤑🤑🤑 pic.twitter.com/A12tUMBgHC

Sensor Tower found that more than half of TikTok Lite’s downloads came over the past month, following TikTok Lite’s return to India. Combined, the two Lite apps’ downloads reached around 6.7 million in December, which was a 158 percent increase over November’s 2.6 million installs, it said.

Despite TikTok Lite’s growth, 12 million+ downloads is only a drop in the bucket when it comes to TikTok’s larger user base. This represents only 4.5 percent of TikTok’s downloads on Google Play since August 2018, and only about 3.6 percent of all TikTok downloads since then across both the iOS and Google Play app stores combined.

To date, TikTok’s main app has been downloaded more than 887 million times on Google Play. That doesn’t count the downloads from the Chinese version called Douyin, which is found on third-party Android app stores. That means TikTok’s true install base is even bigger.

ByteDance itself had publicly said last July the TikTok user base had grown to 500 million+ monthly active users — a way of counting who’s regularly using the app instead of just installing it on their phone. 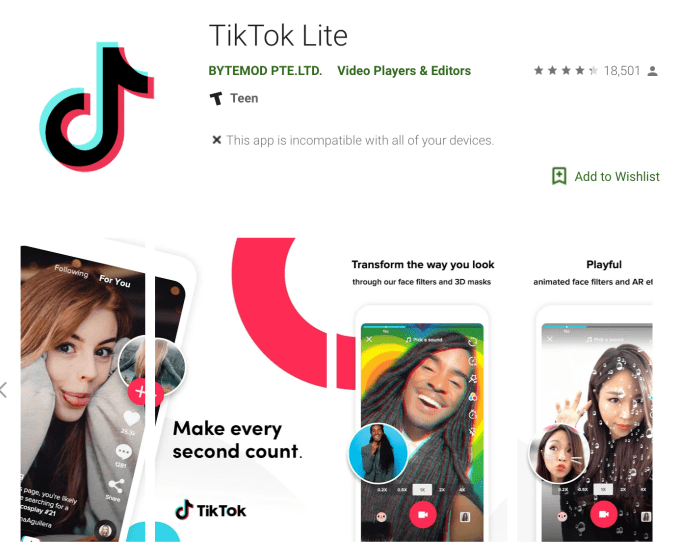 Given that Facebook Lite grew to 200 million users in less than two years‘ time, it seems like a “Lite” version of TikTok, now one of the world’s biggest apps, could be doing a bit better than 12 million installs over a six-month period.

The problem seems to stem from a variety of factors, including how TikTok Lite is marketed in the Play Store. The app uses screenshots and a description that make it seem like it’s just another version of TikTok. But according to user reviews, people were disappointed to find it’s a consumption-only app. Many have left reviews complaining about how they can’t make videos. They call it “fake” and “bad” as a result.

TikTok would do better to clarify how its Lite version is different, to eliminate this confusion. 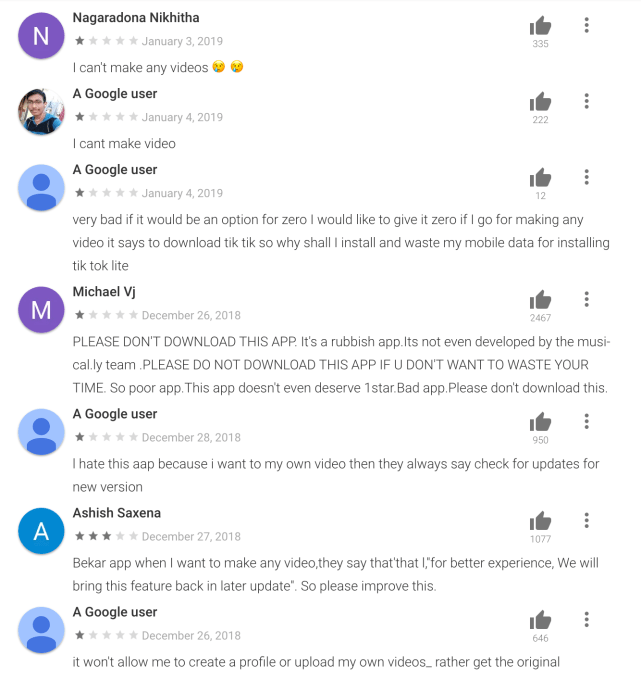 It’s common for major tech companies to offer a “lighter” version of their app for emerging markets where low bandwidth is a concern. These apps tend to be smaller in size, more performant and sometimes either have reduced capabilities or special features aimed at low-bandwidth users. Like most “Lite” apps, TikTok Lite clocks in at a smaller size — it’s only 10MB to 11MB (depending on the version) versus the much larger 71MB of TikTok’s main app.

A rep for TikTok confirmed the company is now offering a Lite version in some markets so users can choose a smaller app if they have concerns around data or the storage space on their phone. No other information about the Lite versions or strategy was provided.

So far, ByteDance’s efforts around TikTok Lite seem more experimental, given it hasn’t put up a proper description on Google Play, runs two separate Lite versions and had offered the app in some markets briefly, pulled out, then returned with another version. It will be interesting to see what TikTok Lite becomes when it gets the sort of attention that the main TikTok app is receiving today.