Microsoft today is rolling out a new version of its game streaming service, Mixer, which it’s calling “Season 2” to reflect the fact that the changes are ongoing, not a one-day release. The company says it’s specifically investing in new areas around expression, monetization and creator communities.

The first of these, called Skills, are focused on giving users more ways to participate in chats with stickers and GIFs, and other screen effects that remind you a bit of those you’d find on iMessage. For example, there are celebratory fireworks and confetti to be tossed around, as well as a beach ball that the community members can keep bouncing.

Streamers will like these, too, as it helps them make money.

“Every time you use a Skill on a partner’s channel, it supports that partner financially,” Microsoft says.

It also says the selection of Skills will be updated regularly, going forward.

Another addition is a way to support favorite streamers via “Sparks,” which are earned by watching streams. These can then be spent on Skills and help partnered streamers reach milestones that translate to cash payouts.

Some high-value Skills will be purchased using a new virtual currency, Mixer Embers. These are the next step up from Sparks, and gives fans’ favorite streamers direct financial rewards. 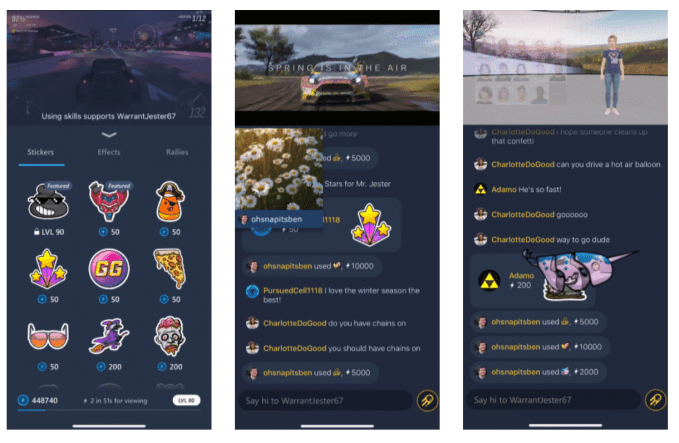 In 2019, Microsoft says it will also introduce the Mixer progression system, to better reflect a community member’s status, beyond just how much they’ve contributed financially. The system will reward a viewer’s engagement with a streamer’s community and Mixer as a whole, and allows members to “level up” by participating in chat, using Skills and earning Applause from others.

Mixer is also rolling out improved video capabilities with the enabling of automatic bitrate switching, more options for use of FTL streaming and the addition of a feature for reporting any video-specific issues.

Skills and Sparks Patronage on Mixer are live now, with Mixer Embers and Progression arriving in the weeks and months ahead.

The changes fall on the heels of Twitch’s annual conference, TwitchCon, where it announced its own set of new features, including new ways for streamers to grow, connect with their community and monetize. Standouts included the launch of group streaming and a karaoke game, as well as changes to badges, new moderation tools and the expansion of sponsored opportunities.