Google’s next-generation Chromecast device launched today – something that came as no surprise, given that Best Buy accidentally sold one to an in-store customer last month. The new streaming dongle doesn’t represent a significant update from the prior version. It’s still a round puck attached to a cable and costs $35, but now it supports faster, 5 GHz 802.11ac Wi-Fi, as had been expected. It also introduces support for streaming to speaker groups.

The company chose not to focus on the Chromecast at its hardware event this morning, instead simply launching the updated device on the Google Store and publishing a blog post.

The new device now sports a Google logo on the center of the puck, instead of the Chrome logo found on the 2015 model, which first introduced the round form factor. That change was meant to help better accommodate Chromecast’s new internals and make it easier to plug into TVs, Google had said.

The third-generation Chromecast also features support for up to 1080p resolution up to 60fps, and plugs into TVs via the HDMI port, as before. It continues to have a micro-USB power connector. And it still doesn’t work with a remote – you use your phone for that. 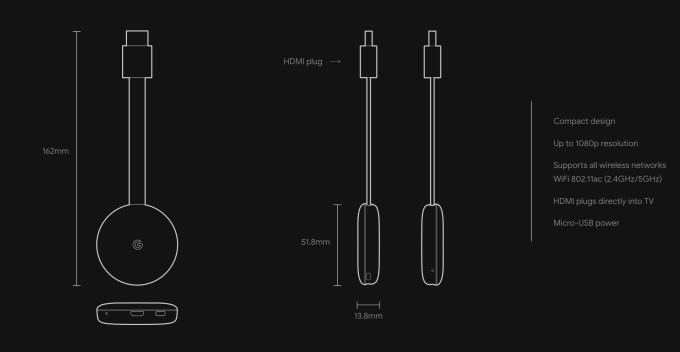 Chromecast’s companion app, Google Home, lets users set up and control their Chromecast, Google Home devices, and Google Assistant speakers. This was also given a redesign today with more of a focus on controlling the smart home.

The Chromecast still comes in two versions – this new, 3rd generation device and the 4K-ready Chromecast Ultra, which is $69.

But for just a little more than the $35 basic Chromecast, you can now buy a $40 4K-ready Roku Premiere or a $50 Fire TV Stick 4K. Perhaps Google is waiting for a more notable refresh to its Chromecast product line that makes its devices more competitive, before making any big announcement here. 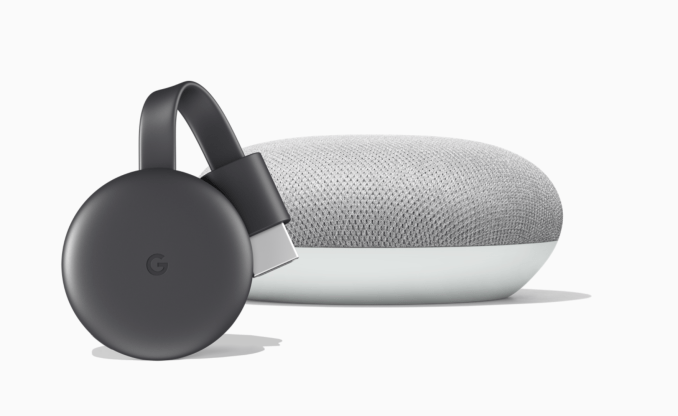 While not available at launch, Google says the new Chromecast will be able to be added to speaker groups sometime “later this year.”

The Chromecast, like much of what Google announced today, wasn’t kept under wraps very well ahead of this event. In addition to the Best Buy sale last month (which another person reported, too), a U.K. retailer also sold the new Chromecast this morning for £29.99, according to reports.