When your feed and Stories trays go stale, or your follower count stops rising, you drift away from Instagram. That’s why the app is rolling out two big new features designed to connect you to new people and diversify your graph so there’s always something surprising to look at and like.

Today Instagram launches its QR Snapcode-style Nametags globally on iOS and Android, after TechCrunch broke the news on the feature back in March and April. Though not technically QR codes, they’re scanned like them to let you follow people you meet offline. Here’s a look at how they work:

Now you can quickly add friends on Instagram by scanning their nametags. You can also customize your own nametag with emojis, colors and selfies. pic.twitter.com/fq4HFNiDMy

The customizable codes are accessible from the three-line hamburger menu on your profile. They can be scanned when other users tap and hold on your code through the Instagram Stories camera or Scan Nametag button on your own Nametag to instantly follow you. You can add colors, emojis or AR-embellished selfies to your Instagram Nametag, show it off on your phone to help people follow you in person, put it on your website or social media or message it to friends through SMS, WhatsApp, Messenger and more.

It’s actually surprising it took this long for Instagram to copy Snapchat’s Snapcodes that debuted for profiles in 2015 and were later expanded to open websites and unlock AR filters. Facebook Messenger launched its own QR codes in April 2017, though it never quite caught on. But they make a ton of sense on Instagram because it’s tougher to share links on the app, people often treat it as their primary presence on the web that they want to promote and because businesses are increasingly relying on the app for commerce. It’s easy to imagine brands putting their Instagram Nametags on billboards and posters, or buying ads to promote them around the web.

Secondly, Instagram is starting to test school communities in a variety of universities across the U.S. They allow you to join your university’s network to add a line to your profile listing your school, class year and your major, sports team or fraternity/sorority. You’ll show up in a directory listing everyone from your school that you can use to follow or message people, though those DMs may go to their pending inbox.

The school communities feature harkens back to Facebook’s origins, when users could actually set their privacy to show all their content to everyone in their school. Here you won’t be able to instantly expose your private Instagram to everyone from your school. You could imagine a freshman in college going through their network to discover new potential friends to follow, or an alumni seeking others from their alma mater in search of business or romance. 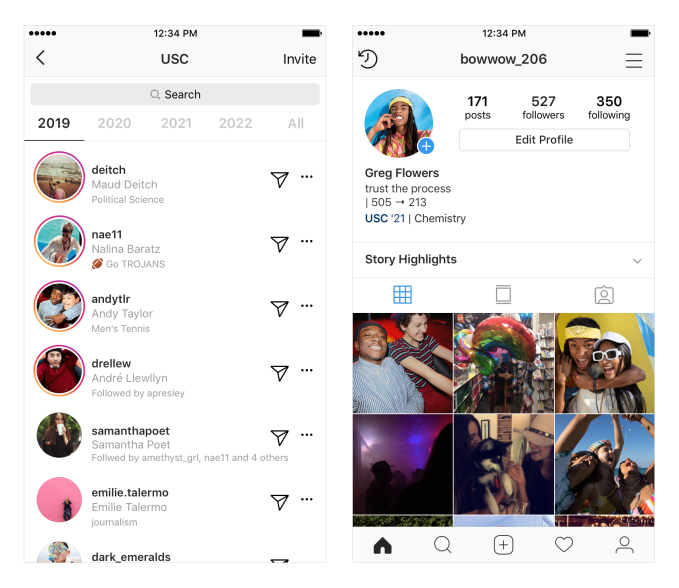 Instagram relies on info users have publicly shared about their school and the people they followed to verify if they were in fact a student or recent alumni of a university. Rather than actively signing up, users will get a notification prompting them to join the network. That’s a lot less reliable than using university email addresses for verification like Facebook used to, but also a lot simpler for users.

The company does provide a tool for alerting it to misuse of the school communities feature in case any sketchy older users are employing it as a stalking tool. Next to each user’s name is an overflow menu of three dots where people can report accounts they don’t think belong in a certain community. 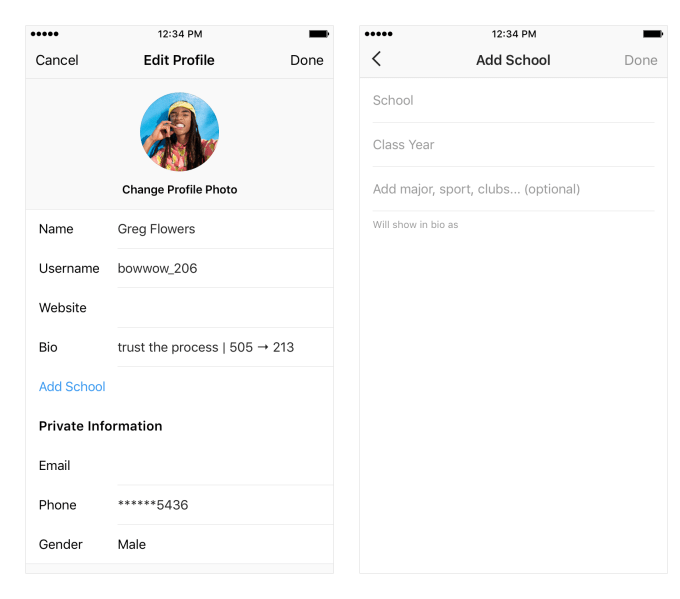 The invite method is reminiscent of the growth hacks that teen Q&A app TBH that Facebook acquired was using. In what an internal memo called a “psychological trick,” TBH scraped Instagram user profiles for school names, looking at school location pages to find student accounts to invite them to join TBH. The teen sensation was eventually shut down due to low usage; the memo called the tactic too “scrappy” for a big public company, but now it’s found a home inside of Instagram.

Today’s launch is the first under Instagram’s new leader Adam Mosseri following the resignation of the company’s founders. Critics are watching to see if Mosseri, the former Facebook VP of News Feed and member of Mark Zuckerberg’s inner circle, will push harder to drive growth and monetization for Instagram. Given Instagram’s priority here is expanding its social graphs and keeping users engaged, it seems willing to trade occasionally allowing or disallowing the wrong people to reduce friction and juice growth.