Facebook gave businesses the Like button connected to their Page, and now Snapchat is giving websites their own QR Snapcodes. With today’s iOS update and Android beta, users can create a unique Snapcode for a website, which will open inside Snapchat when they scan it with the app’s camera. This could create a powerful way for businesses and other sites to promote themselves with photographable symbols instead of just a URL.

To use the feature, open “Settings” and select “Snapcodes,” then “Create Snapcode.” Enter the URL, add an image from the website or your phone, resize it so it fits inside the Snapchat ghost logo and then you can save it for use wherever. There’s also a web editor for Snapcodes available here. 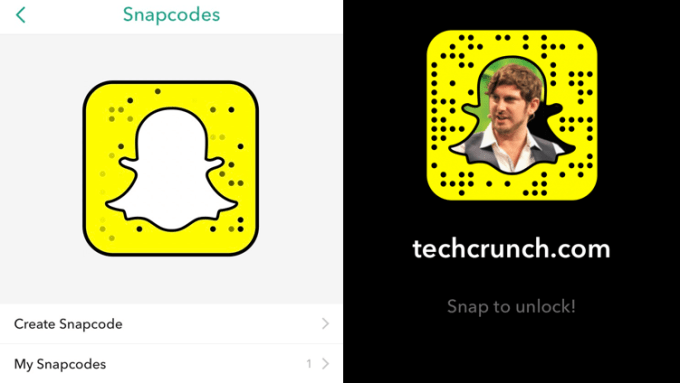 Snapchat introduced the QR codes for profiles in January 2015, based on technology it acquired along with startup Scan.me. They made it easy for people to add each other on Snapchat without typing in user names. One person just pulls out their Snapcode from Snapchat’s Settings menu, and another focuses their Snapchat camera on the QR code to instantly follow them.

Chinese messaging app WeChat pioneered the idea. Snapchat brought it to the West… and it was later copied by Facebook, which added QR codes for adding people on Messenger.

Snapchat later let people customize their Snapcode with a selfie GIF and download a vector version for printing on posters, apparel and more. Then it began allowing people to open a publisher’s Snapchat Discover content and unlock filters and lenses by scanning a Snapcode. Sam Sheffer first spotted today’s update.

Offering more ways to promote content outside of Snapchat could boost the app’s utility amongst public figures and businesses. While Snapchat’s fast-rising competitor Instagram allows people to put a URL in their profile and lets verified accounts share URLs in Stories, Snapchat doesn’t. Snapcodes for websites could provide flexibility for promoting one’s site or products without disrupting the URL-free experience.