In the music streaming era, access to data is king. Artists want to know how their music is being discovered, who’s listening, where, how many have streamed their release and what else their fans are into, among other things. Today, Spotify is releasing an app for artists that aims to answer these questions, while also giving artists a way to update their profile and connect with listeners while on the go.

Essentially, this new “Spotify for Artists” app, as it’s called, is a mobile version of Spotify’s artist dashboard, which exited beta earlier this year. The key difference is the convenience of mobile access — something Spotify product manager, Miles Lennon, says was a top demand.

“The first thing we’re trying to achieve is meeting the artists’ needs to have mobility,” he says. “They don’t have desk jobs. While we have a desktop product, it’s not accessible to them.” 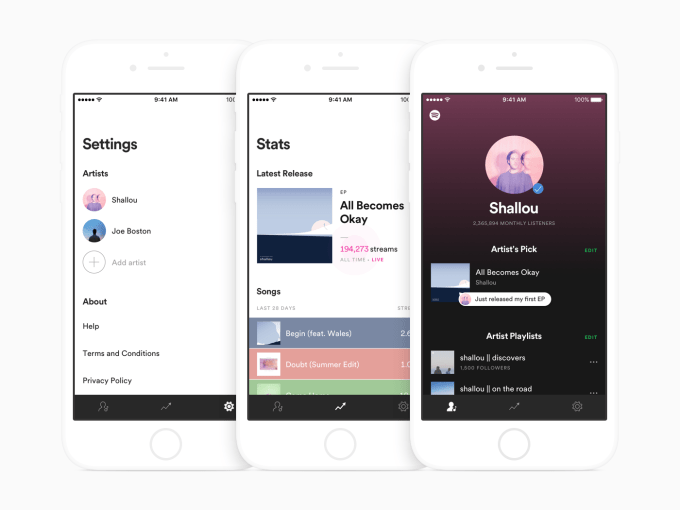 Like the web dashboard, the app lets artists update their profile on the service, including things like their bio, their artist’s pick and their playlists. These picks and playlists are one of the ways artists on Spotify engage fans — by telling them what favorite new song they’re listening to, for example, or by featuring their favorite tracks.

The ability to upload new photos to the artist profile is not yet supported, but will be in a future release of the app, we’re told. 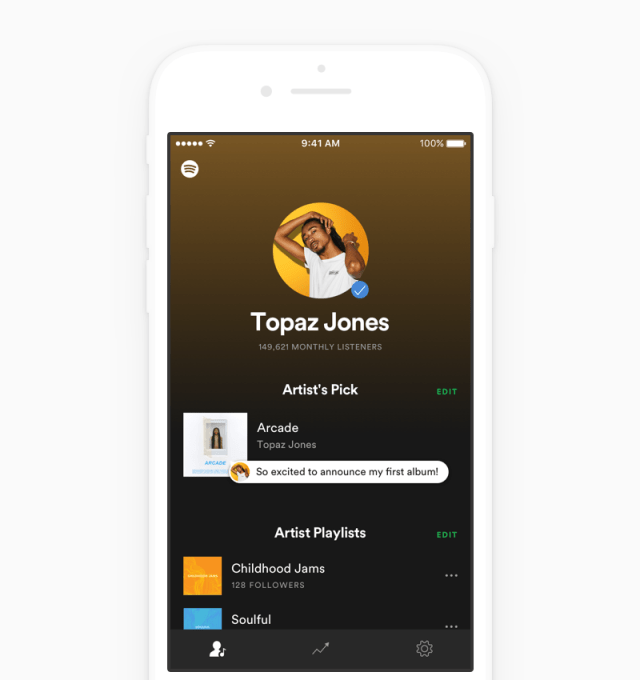 However, the key features in the Spotify for Artists app have to do with gaining native mobile access to streaming data, including real-time data on new releases.

As soon as a new release drops, the app will update instantly as the track gets streamed. This will continue for the first week after a new single, EP or album is released, says Spotify. 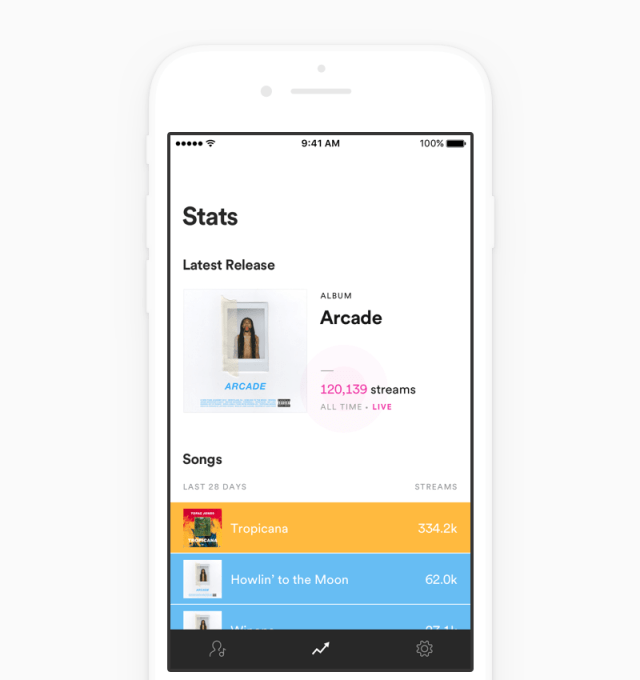 This feature is exclusive to mobile and leverages Google’s Cloud infrastructure, explains Lennon. The one-week time frame was chosen partly because of the challenges of scaling such a feature, but also because it’s the most critical period to track. However, that time frame may expand in the future.

Data like this is crucial for artists, who today compete for fan attention and acclaim on number of streams, not album sales. And on Spotify, half of users discover music by way of playlists or the radio, the company has said before. So if a new release drops but isn’t picking up steam, artists will know this information immediately, then can act accordingly — getting their tracks on the right Spotify playlists, or getting other artists to feature their music on their own profiles, for instance. 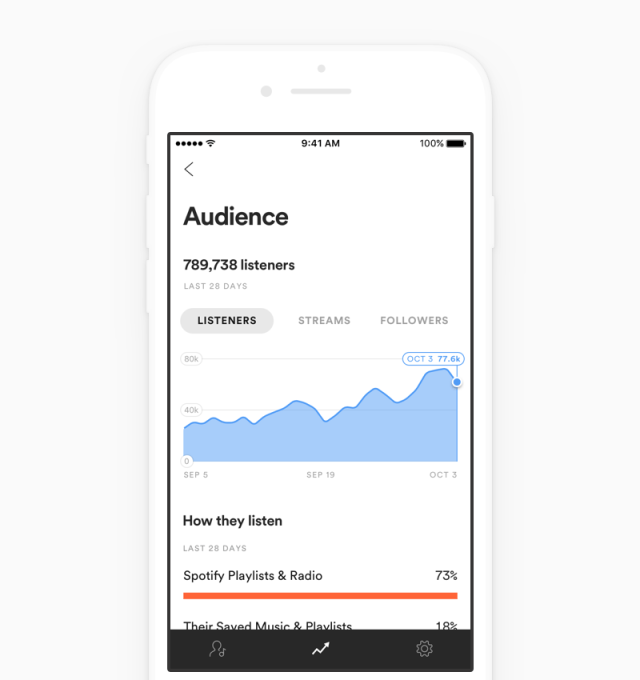 In addition, the app will provide access to listener demographics, including information like gender, age, location and even what they stream, how they listen and what else they like.

Again, this is data the Spotify for Artists dashboard on the web also contains, but the focus here is the convenience of mobile combined with the power of data. It’s a way to drill down into the fan base, to separate the casual streamers from the more dedicated fans and learn more about where and how the music is being received.

“Artists are always looking to understand did this next record I put out bring me to a new level of fandom, or did this new sound change the audience makeup?,” says Lennon. “Has the gender makeup of my audience changed? Has their age changed? Or even, maybe the countries or cities?…this is something artists have told us is really critical for them.”

These demographic details also can help artists when they’re promoting their music outside Spotify — such as on Facebook by way of social ads — or for planning tours.

Data on an artist’s most devout listeners also is used today with Spotify’s email targeting project, Fans First, which lets artists reach out to top fans with special offers — like presale concert tickets, for example. These campaigns are said to outperform those from traditional email marketers, which expect only a quarter of recipients to open their emails. Spotify, meanwhile, has said that its email open rate is 40 percent, and clickthrough rate is 17 percent.

The Spotify for Artists app today doesn’t yet connect the dots between gaining access to the data and taking action based on those findings. But that’s on the roadmap.

“That’s also something that we’re working on and looking into very closely,” Lennon says.

“One of the things that inspired the ‘latest release’ feature is that the app should know what’s important to you and surface that prominently above other things,” he says of the way the app today features the real-time streams front-and-center after new releases drop. “That’s a theme we’re going to continue to build upon: letting artists know what they should pay attention to, and why, and giving them ways to act on that.”

Asked if any of these future recommendations would be premium features, Lennon said no. There are no current plans to charge for these insights.

The Spotify for Artists app had been in testing for a couple of months with more than 100 beta testers prior to today’s release on iOS.

An Android version is expected in a few weeks.