Following reports that Amazon is preparing to launch a new device that would allow Fire TV owners to record live TV, Dish’s AirTV has just done the same. The company announced the launch of a “Local Channels DVR” feature for AirTV customers that lets users watch and record live TV both in and outside the home. The recorded content is made available within Dish’s Sling TV application, alongside subscribers other Cloud DVR recordings.

Dish first unveiled its AirTV Player, a 4K media streamer set-top box, at CES 2017, then later began doling out digital antennas to Sling TV subscribers with the AirTV Player as part of deal for pre-paying for the company’s streaming service.

This year, it expanded its hardware lineup to include a new device, just called the AirTV, which is a networked TV tuner that doesn’t connect directly to a TV, but rather streams local programming via Wi-Fi.

As with Plex – and, presumably, with Amazon’s forthcoming plans – being able to record and stream from live TV is one way companies are working around cable providers, or having to make content deals in order to expand their streaming line-ups. It gives cord cutters way to watch hard-to-access programming, like local news and sports, for example.

Dish’s new Local Channels DVR feature will require an external storage device in order to work, which is not included.

This means it’s similar to something like Tablo’s OTA DVR for cord cutters, which has customers attach their own USB hard drive. In AirTV’s case, the maximum supported drive size is 2 TB. 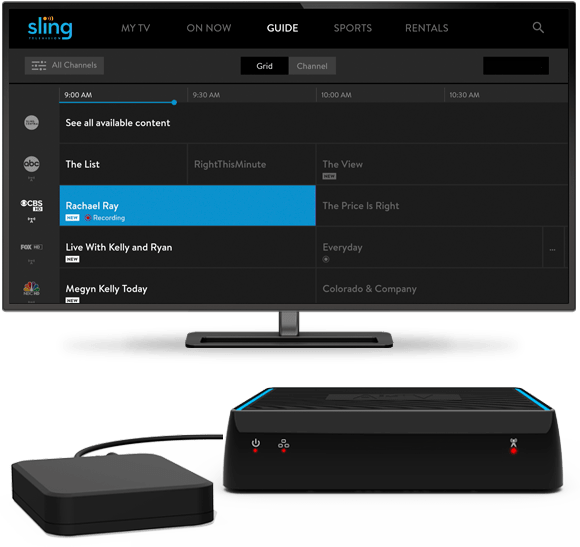 The DVR also supports dual-tuner functionality, so customers can record up to two shows at once, or watch one live while recording another.

TV show recordings can also be scheduled by the episode or by the series.

Once AirTV is set up, the recorded content is available through the Sling TV app across platforms, including iOS, Android, Amazon Fire TV, and Roku.

It will be found in the same menu as the Cloud DVR content – where you find the movies and shows you record through Sling TV’s DVR. But these recordings will have an OTA icon next to them to help users differentiate the AirTV content from the rest.

Upon playback, the content can be paused, rewound, or fast-forwarded. In addition, if watching a recording in real-time, users can pause the live TV stream.

To gain access to the feature, AirTV users will have to update their device and restart their Sling TV app.