Earlier this summer, Tinder began testing a new feature that surfaces a curated list of your best potential matches, called “Top Picks.” The feature, which is only available to paying subscribers on Tinder Gold, is now available worldwide, Tinder says.

Top Picks had also quietly launched in the U.S. and U.K. last week following initial tests in Germany, Brazil, France, Canada, Turkey, Mexico, Sweden, Russia and the Netherlands, in addition to the U.K. However, Tinder waited until the global rollout was underway to announce its arrival.

The idea behind Top Picks seems a bit inspired by the dating app Coffee Meets Bagel, which similarly focuses on curation of matches to reduce users’ impulse to continue swiping through what feels like an unlimited number of profiles. Humans don’t do well with too many choices – an overabundance of options can actually lead to anxiety, and – in the case of dating apps – an inability to settle on a decision, as users know there’s always another potential match just around the corner, or so it’s been argued.

Tinder’s solution for this is Top Picks, a more limited set of potential matches it thinks users will like based on information in users’ profiles like education, type of job, hobbies and interests. Tinder then uses this data to organize users into groupings, like “foodie” or “creative” or “adventurer” and so on. 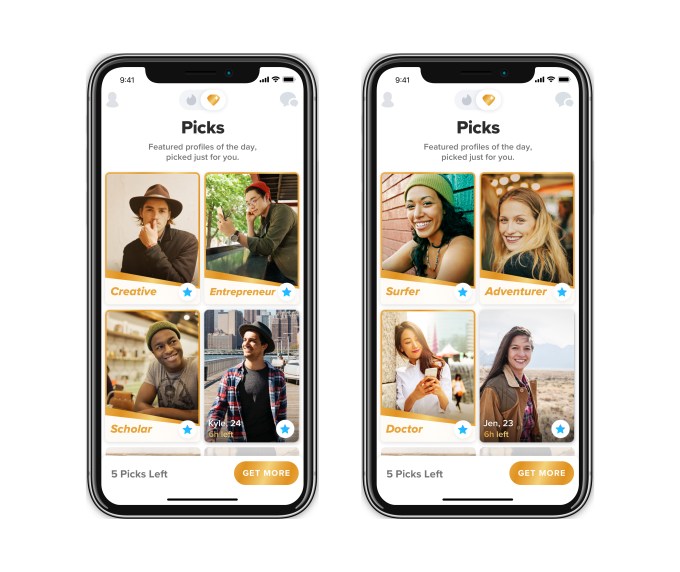 This information is combined with users’ previous swiping behavior to determine the day’s Top Picks, which area available to toggle over to (via the diamond icon) on the app’s home screen.

While Top Picks will refresh daily, users can opt to buy more Top Picks in packs of 10, 20 or 30 a la carte, Tinder says. (Yes, by “packs” we do mean groups of user profiles – Tinder has turned people into in-app purchases you can buy. Yeah. Great.).

The feature is only available to Tinder Gold subscribers, meaning it varies in price. Tinder charges older users more for accessing Gold, and weights other factors like region, length of subscription, and recent in-app promotions when showing you its pricing. 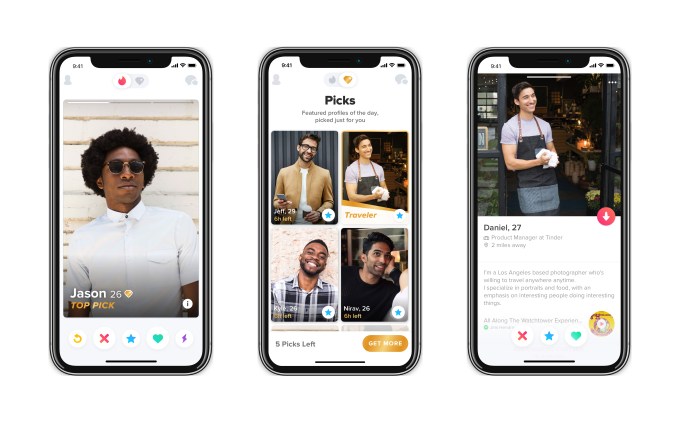 Paid features like Top Picks have helped to fuel Tinder’s growth and its revenue.

Paid subscribers are also soaring. Tinder parent company Match Group reported that Tinder added 299,000 paid members in the second quarter, totalling 1.7 million additions in the past year, and more than 3 million to date.

“We’re excited to finally share Top Picks with our users around the world given its early success,” said Brian Norgard, Chief Product Officer at Tinder, in a statement. “Data suggests users in test markets have loved the feature, and we’re happy to make one Top Pick available to all users each day with this global rollout. The feature refreshes every day, highlighting the diversity, talents and passions of our users in a simple, fun and useful manner.”

The launch of Top Picks arrives at the same time that a new documentary about Tinder’s outsized influence on dating culture, Swiped, has debuted on HBO.

The film takes a fairly damning view of online dating via apps like Tinder, by highlighting some of its worst attributes – like the men ordering women to their home the way they do Seamless; the swipe addicts who always think there’s someone better out there; the unsolicited sexual photos women receive; as well as the overall decline in value for genuine human connections, due to the abundance of choice offered by dating apps’ massive “catalogs.”

Top Picks won’t necessarily solve these problems. At best, it may at least help users narrow their focus and begin to understand there aren’t actually endless dating options when you have certain criteria in mind. At worst, it may encourage users to view people as even more of a commodity, as they click to pay merely pennies for more Top Picks “packs.”

The feature is rolling out globally on iOS and Android as of Monday evening.