Ahead of the 10th anniversary of the iOS App Store on July 11, App Annie has today released a retrospective of the top iOS apps of all time, along with key milestones in App Store history. Its report tallies up the top apps of all time by both downloads and revenue, as well as the top apps by year starting in 2010 (when App Annie started tracking this data) and more.

The result is a fairly comprehensive look back at the App Store, which has now seen more than 170 billion downloads and more than $130 billion in consumer spend on apps since July 2010. And now, today’s App Store includes some 2.2 million apps, even after Apple’s big cleanup.

For its analysis, App Annie split “apps” into both games and traditional applications — similar to how the App Store now gives these two categories their own sections and top charts in its iOS App Store app following the App Store makeover in fall 2017. App Annie then broke down the “top” games into those that were the most downloaded and those that made the most money.

Across both charts, you’ll find classics like Clash of Clans, Candy Crush Saga and Honour of Kings. However, some of the App Store’s most memorable games — like Temple Run and Angry Birds — didn’t make the top 10 by consumer spend. Instead, the No. 1 game by revenue is Clash of Clans, followed by Candy Crush, which was also the most downloaded game of all time.

While App Annie can’t reveal all the download numbers or revenue figures because of client relationships, it could say that Candy Crush has been downloaded more than 280 million times worldwide from July 2010 through May 2018.

The top game by revenue, Clash of Clans, earned more than $4 billion in global consumer spend on iOS to date during that same time. 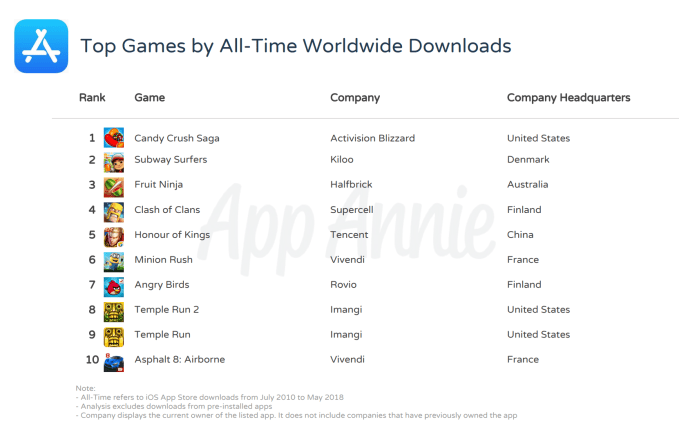 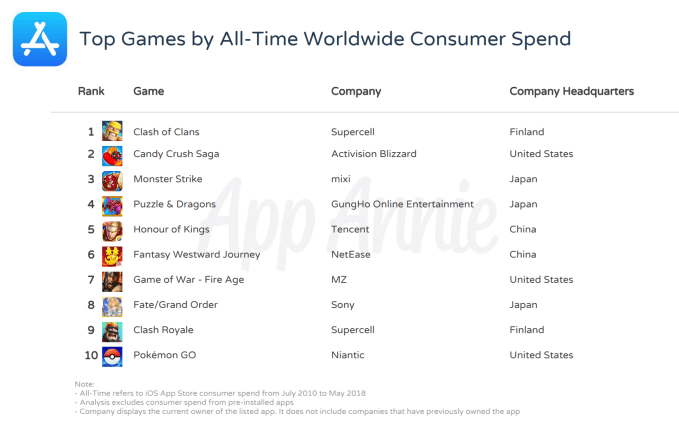 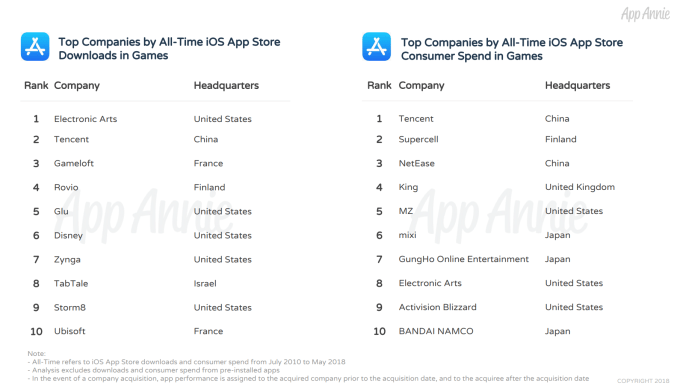 Meanwhile, Facebook and Google’s apps dominate the top charts in terms of the most downloaded iOS apps of all time.

However, the top charts by consumer spend are a very different picture — instead of social utilities, they’re all about subscriptions and streaming. Here, Netflix is No. 1 as it’s approaching $1 billion in global consumer spend, followed by Spotify, Pandora, Tencent Video, Tinder, LINE, iQIYI, HBO NOW, Kwai and QQ. 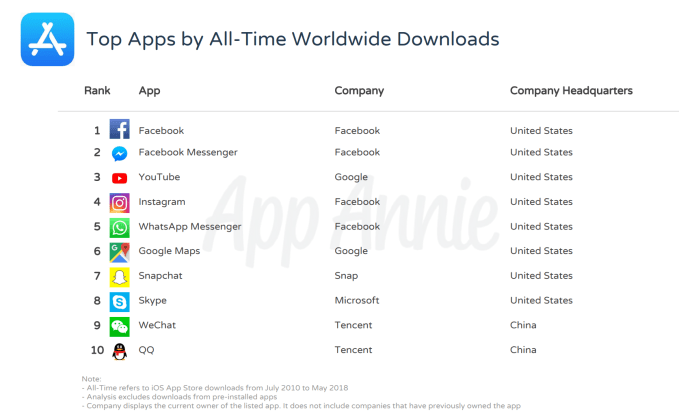 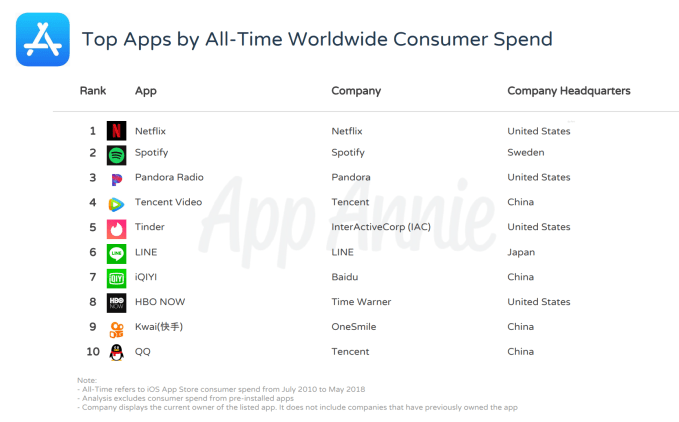 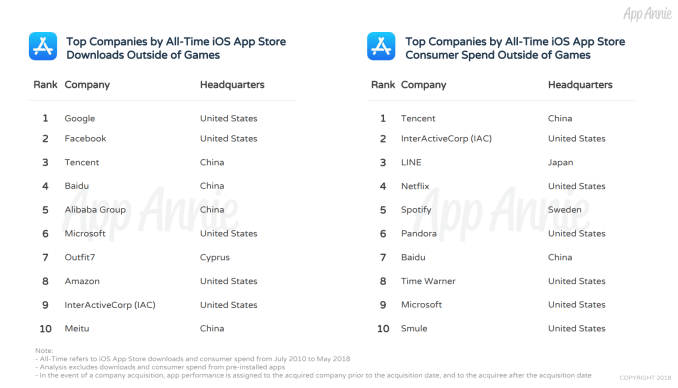 The report also includes top apps each year and several notable App Store milestones, as related to the business of apps, not the App Store itself.

This includes the doubling of app revenue between 2015 and 2017, iOS app revenue outpacing Google Play and the growth of apps hitting more than $1 million in App Store revenue, among other things. This data is not a rehashing of older App Annie reports, rather something fresh it put together for the 10-year anniversary, however.

One chart on its report could have used a bit of context, though. It chose to include a chart citing the U.S. as the largest market by all-time iOS App Store consumer spend and downloads, referencing data collected from July 2010 to December 2017.

But today, China is the largest app market and will continue to hold that position through 2022, according to App Annie’s own estimates. It may not have made No. 1 on “all-time” chart, but only because it got a later start. Notably, it has still managed to nearly top the U.S. with 39.9 billion all-time downloads to the U.S.’s 40.1 billion, and $27.7 billion in all-time consumer spend, to the U.S.’s $36 billion.

The full report is available on App Annie’s website.