Africa has been one of the least-developed regions globally when it comes to technology and being on the less advanced side of the so-called digital divide. But with a huge population and a set of nations whose economies are rapidly changing, we are seeing a significant knock-on effect in tech. Today, one of the more interesting startups, in the area of financial services, is announcing some funding that underscores that trend.

Paystack, a Stripe-like startup out of Lagos that provides online payment facilities to merchants and others by way of an API and a few lines of code, is announcing that it has raised $8 million in a Series A round of funding. The company is active today in Nigeria, where its payment API integrates with tens of thousands of businesses, and in two years it has grown to process 15 percent of all online payments; and the plan is to both continue to grow in its home market, as well as expand to more countries, starting with Ghana.

I describe Paystack as “Stripe-like”, and in an interesting twist, the round is being led by none other than Stripe itself — a mark not just of how the latter (once a YC startup itself) is eyeing up like-minded global founders and businesses as it continues to grow, but also how Stripe understands the challenges of breaking into a region like Africa, and therefore sees an opportunity to work with and support those who are.

“The Paystack founders are highly technical, fanatically customer oriented, and unrelentingly impatient,” says Patrick Collison, CEO of Stripe, in a statement. “We’re excited to back such people in one of the world’s fastest-growing regions.”

“It takes a lot of local nuances to build for African businesses,” said Shola Akinlade, the CEO of Paystack who co-founded the company with Ezra Olubi (who is the CTO) and are pictured above. “Paystack seems to be the only one doing this.”

In 2016, Paystack became the first startup from Nigeria to enter Y Combinator, and the incubator is doing some follow-on investing in this round. Other strategic investors in this Series A include Visa and the Chinese online giant Tencent, parent of WeChat and a plethora of other services. (Tencent also invested in Paystack’s previous round: the startup has raised $10 million to date.)

Stripe scored a big win in financial services in the West when it developed a very quick and easy way of integrating payments into any app or website, taking what used to involve a lot of integration and negotiation and reducing it into a few lines of code. It came just at a time when apps were starting to take off, and people were coming around to feeling more comfortable about making financial transactions online, as long as they were easy to do.

Paystack has followed a similar template, albeit much more localised.

Nigeria is the biggest economy in Africa, but even so, it is only just getting the ball rolling on digitising commerce. There have been other payment providers operating in the market — Interswitch being perhaps the biggest — but Akinlade describes Paystack as a more modern take on payments. Specifically, its focus is on integrating the wide range of payment options that Nigerians (and soon, those in other countries in Africa) use both to accept payments and make them and making each of them equally easy to use. 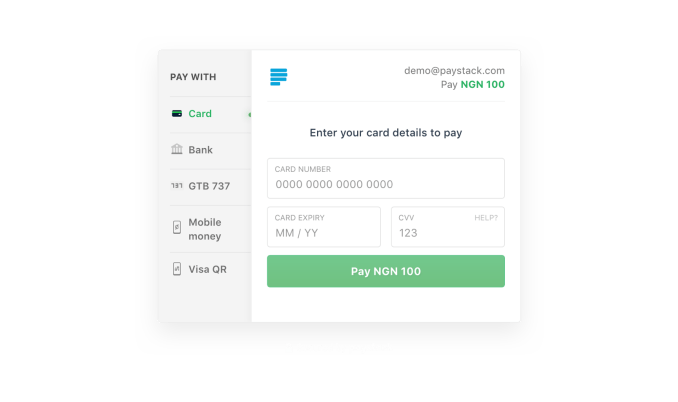 Ease of use belies the fact that the list of payment options across Africa is long and fragmented. Paystack makes it possible to make and take payments using payment cards, which is the norm in many Western markets, but also bank transfers, as well as a number of payment routes that have arisen out of the fact that many people are “unbanked” — that is, without bank accounts or credit histories built by using payment cards.

These include mobile money services, which essentially turn a user’s mobile calling account into a place to store and pay out money; and USSD-based services, which use an even more basic part of a phone’s communications infrastructure to send messages and money (USSD has been using by a number of other providers looking to provide more connectivity in emerging markets).

These newer routes tend to be more localised, but are also some of the most important to have in a payments service. According to the World Bank, mobile money is the fastest-growing route to financial inclusion across Africa: while the share of adults with bank accounts in sub-Saharan Africa has remained flat, the number of those using mobile money have increased by over 20 percent.

Integrating these options involves Paystack not only working with all major banks, but all major mobile carriers to cover the range of payment methods.

It’s a long list of potential partners, but one that the Paystack founders have been working with for more than just two years.

Akinlade, who had studied computer science at university, worked first for Heineken for two years before he “got bored” and decided to strike out as an entrepreneur.

His first stab was another “clone” of sorts: it was an emerging market version of Dropbox called Precurio, which grew to have over 200,000 customers. Some of those were Nigerian banks, who started to reach out to ask if Akinlade could help them with software projects. In doing so, he spotted a big gap in the market to build a startup around e-commerce payments covering multiple banks and multiple other players in the payments chain. “I quickly realised that payments here were not the same as in the US and UK,” he said.

Building a product that knits together a number of disparate services  those relationships is not only more challenging for those less familiar with the landscape, but potentially something that they are less interested in doing on their own when the market remains still relatively small. Akinlade said that the total amount processed monthly at Paystack is now at over $20 million — which in larger global terms is still a very small amount of money, and even less so when you consider that what Paystack makes on those transactions is just 1.5 percent.

Still, as the economy gets further up to speed, it’s a region that the big financial services businesses of the world cannot overlook.

“Africa is central to Visa’s long-term growth strategy, especially when you consider how cash is still a primary payment option for millions on the continent,” says Otto Williams, head for strategic partnerships, fintechs and ventures for Visa in Central & Eastern Europe, Middle East and Africa (CEMEA), in a statement. “Our investment in Paystack aligns with the kind of investments we look for – those that will help extend our reach into the global commerce ecosystem as it changes and grows, and that will provide mutually beneficial business opportunities.”

Not only is the economy slowly growing, but tech times are most definitely changing, too. Now there have been around nine startups out of Nigeria that have gone through YC. That’s probably still proportionately too few, considering the wider opportunity and number of developers across Africa, but it is a start.