Twitter is working hard to build up its profile and usage among people in developing markets, and today another piece of that strategy has come into focus. It has signed a deal with Switzerland-based mobile software company Myriad Group to provide access to Twitter via mobile devices without using a mobile Internet connection, instead relying on a text-only transmission technology called USSD. The service will let users experience Twitter purely as “consumers” who do not need to log in, or even have an account at all to use it.

Myriad’s deal with Twitter is similar to a partnership that was made public last week, when Reuters reported that a company called U2opia Mobile was linking up with the social network on a USSD service. While that article hinted at how the service might work (U2opia has not made a direct statement about it), Myriad has provided us with screenshots and confirmed further details.

This, however, is an interesting progression. Twitter is now, for the first time, officially certifying USSD partners, and it is moving more proactively with a different concept of its service: USSD users will, initially at least, be given a “log-out” experience of the service, without the need to log in or even sign up, and it will be read-only, without the ability to post your own status updates.

USSD, by way of background, is short for Unstructured Supplementary Service Data, and it is technology that is built into even the most basic GSM phones.

USSD operates on a channel separate from SMS, meaning a user doesn’t even need a messaging plan to access Twitter. Other social networks like Facebook have also been deployed over the USSD channel as a way of reaching out to users in emerging markets, where PC penetration is low and mobile handsets are the primary communication device.

Myriad is also behind many of the Facebook deployments we’ve seen on USSD, such as this one with Orange covering Africa. To date, Myriad has had some 17 million unique users of its services across Africa, Latin America (where it’s the exclusive partner of Telefonica), Asia (where it works with Vodafone in India and with others across different markets) — some 20 countries in all.

The Facebook service has seen some strong takeup, with one deployment in Egypt picked up 50,000 new users a week when it first launched. (It was helped with a clever marketing tactic — a user had to enter *125# to activate the service, a specific reference to the start date of their Spring revolution.) 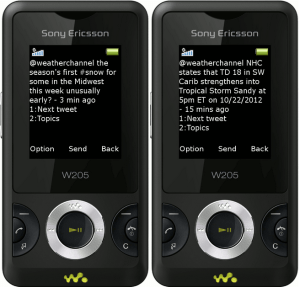 Twitter is a natural partner for a USSD service. Like text messaging, USSD texts have a 160 character limit. “For Twitter it is even better than Facebook because it’s a text driven network,” says Olivier Bartholot, Myriad’s San Francisco-based VP of corporate development and GM of device solutions. “It’s 140 characters so it fits perfectly in what you can provide in terms of the user experience.”

For social networks you can see the obvious interest in the technology: it’s a way of giving access to their services for those who either don’t have smartphones, or who do but are loathe to spend money on 3G, or simply do not have connectivity where they are. Twitter already more users outside the U.S. than it does in its home market — 179 million versus 53 million — but revenues are far smaller. Twitter made $2.58 per user in the U.S., versus just $0.36 per user abroad. For an ad-based business model, it needs to scale out its international businesses as part of the way to make up the shortfall in the near term.

For carriers, USSD-based social networking services are attractive because they can sell the option to their users as a value-added service.

“This is a ‘logged out experience’ in the words of Twitter,” he says. “You view but you don’t log in as an end user.” Instead, the service is conceived as “lean-back”, more like a broadcasting medium. “What happens is that we get a suggested list of high-profile users in each country. From that we create a list of categories. We get tweets from these users, and when a user chooses to follow a TV presenter or movie star, or a topic like sports, that user will receive tweets from those selected people or categories.”

The proposition will be very localized to different markets. A particular operator in Africa, for example, may want to create a category about weather to update farmers, fishermen and others who work outdoors. An operator in India may want to create one tracking Bollywood celebs. The mixture, it seems, will be very much of practical/useful and pure entertainment, much like the wider Twitter experience.

He says that the new version, which is planned for launch in Q1 next year, was prompted by Twitter’s new API that was introduced earlier this year. One consequence of it was that it made the old, two-way service no longer usable. “We started the conversation with Twitter in March and it took us six months to work out,” he said. “We now have the certification from Twitter to now deploy this service. What it means is that we now have the brand license and we can call the experience a Twitter experience.”

One important detail that Twitter’s USSD service highlights is that it plays into the general concept of how social networking services go ’round: over 90% of users are simply “lurkers” who read what others post, while most of the rest do both (and yes there are some starlets and bot-like news accounts who only post and do very little reading).

“It’s a way to give a first taste to users of what Twitter is about, especially outside the U.S.,” he says. “In the U.S., Twitter is famous. In other places, not so much.” The idea is to familiarize and grow with the user. As she or he upgrades to more and more sophisticated phones and networks, so will Twitter functionality.

There are some compelling stats to back up the USSD approach taken by Twitter and Facebook. In Brazil, for example, there are 265 million mobile users, but 210 million of those are not using data on a regular basis. “They have smartphones but they just don’t have the means to pay for a subscription or they live in places where the coverage is poor,” Bartholot notes. Even among smartphones, there aren’t very many: there are 220 million feature phones compared to 45 million smartphones. Pointedly, those statistics came from Twitter itself, he tells me.

Right now Myriad has deployments with some 45 carriers for USSD services and is aiming for 40 more. Already its addressable market has a reach of nearly 1 billion users, all told. “That’s what convinced Twitter to go with us for this,” he says.

But on the other hand, there are a number of questions that are still unanswered:

For example, what about a service for those who had already been using Twitter using USSD and were able to post messages but now cannot? Or new users who feel like they are getting short-changed by only getting “feeds” but no input capabilities of their own? Bartholot says that there may be more two-way communications added in over time, as Twitter continues to monitor how take up of this initial service proceeds.

Another area is advertising. Bartholot says that the company is still weighing up how to serve ads through this service, and whether it will count it towards its “per 1,000 views” metric (or if something like that can even be tracked when a user is not logged in). In any case even if there are ads, they will lack a crucial engagement/conversion element: right now, if any link comes through on the service — say through a news service — it will be “dead” as such.

And that’s still not addressing the idea of how and if this will help Twitter build up active users in these markets, how Twitter will count them if they’re by default “inactive” on the self-publishing front, and whether it will ever manage to convert this still-large base of people who have remained on the less-accessible side of the digital divide.