Snapchat has largely escaped scrutiny about fake news and election interference because its content quickly disappears and its publisher hub, Discover, is a closed platform. But now the Infowars mess that’s plagued Facebook and YouTube has landed at Snap’s feet, as conspiracy theorist Alex Jones has begun tweeting to promote an augmented reality Snapchat Lens built by someone in his community that puts a piece of masking tape with the word “censorship” written over it across the mouth of the user with a “Free Infowars” logo in the screen’s corner. He’s also encouraging his followers to follow Infowars’ official Snapchat page.

The situation highlights the whack-a-mole game of trying to police the fragmented social media space. There always seems to be another platform for those kicked off others for inciting violence, harassing people or otherwise breaking the rules. A cross-industry committee that helps coordinate enforcement might be necessary to ensure that as someone is booted from one platform, their presence elsewhere is swiftly reviewed and monitored for similar offenses.

The new #Snapchat filter to get the word out about #FreeSpeech is available
now! #FreeInfowars #IAmAlexJones

👉 Screenshot the snapcode at the end of the video to get it today! 👈 pic.twitter.com/RKjpcIBOto

“If they can shut me down, they can shut you down,” Jones says at the start of his 42-second video. He cites Facebook, Twitter and Google among those that are getting mobilized by “the Democrats” in aid of defeating opposing candidates in future elections.

(In actual fact, Twitter and related sites like Periscope have, to the consternation of many, not removed Jones’ or Infowars’ accounts from its platform, and for that matter neither has LinkedIn, Google+, or Instagram. Others like Pinterest and Facebook itself have now gotten behind a wider move to start to take action against accounts like these to reduce the amount of sensationalized information being spread around in the name of “free speech.” You can see the full list of Infowars’ and Alex Jones’ active and now inactive social accounts here.)

Jones himself doesn’t seem to have a Snapchat account, but Infowars’ website cites the “Infowarslive” handle as its official Snapchat profile, and it’s what Jones is now pointing fans toward. However, from what we understand from sources, the account has been inactive since early this year. Snap, according to these sources, is currently monitoring it to see what it does and whether that content violates community guidelines, which prohibit hate speech and harassment. 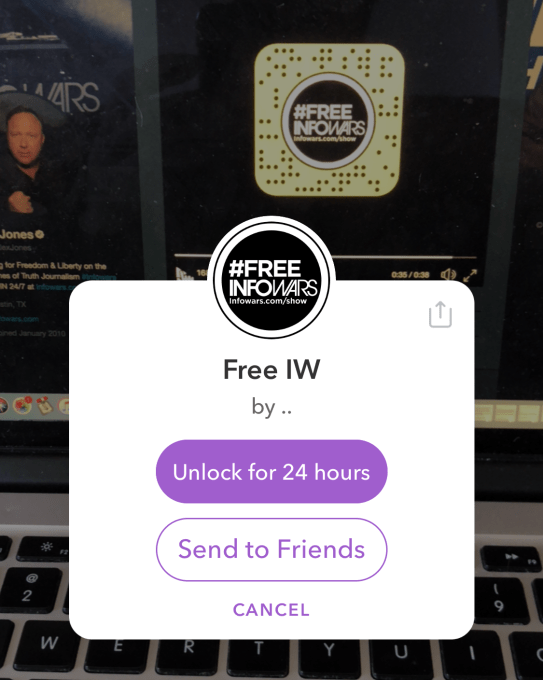 In the meantime, say the sources, Snap is also looking into the Lens that Jones is promoting to determine whether it violates Snap’s community guidelines. These guidelines include prohibiting content that may incite or glorify violence or the use of weapons; may be considered offensive by a particular group of individuals or that could foster negative stereotypes, such as slurs or other derogatory language; promotes dangerous, harmful, or illegal activity, or that encourages Snapping while driving; contains hashtags or usernames; or threatens to harm a person, group of people or property.

The interesting thing with a Lens, however, is that while the Lens itself may be innocuous, how it gets appropriated might be less so, and that’s not something that might get caught as quickly by Snap. Users can unlock the Lens for 24 hours with a link or screenshot of its QR Snapcode. From there they can do whatever they want with it, including reactivating it each day for further use. Lenses are one of the least ephemeral parts of Snapchat, making them a potent vector for persistently spreading a controversial viewpoint, and indeed viewpoints that might well violate those community standards, even if the Lens itself does not.

The insight that’s emerging from the whole Infowars debacle is that problems exist not only with how public figures use social platforms, but with how their audiences interpret or mutate their messages as they get shared, again and again.

Snap itself — as its earnings showed us yesterday — is still a smaller platform compared to some social networks. That’s another reason it may have avoided becoming a tool for information operations by malicious actors like the Russian agents that attacked the 2016 presidential election via Facebook.

But Snapchat is in a vulnerable place right now. Yesterday’s Q2 earnings report revealed that its daily active user count actually shrank from 191 million to 188 million. It took a hard stance against fake or controversial accounts, either blocking on driving away users, that could further weigh on its growth. Snap is meanwhile starting to see momentum in its ad business, beating expectations with $262.3 million in revenue last quarter. That’s a trend it doesn’t want to mess with.

Now that Jones can’t spread his false news on Facebook and YouTube, he may look increasingly to platforms like Snapchat or his mobile app that Apple hasn’t removed. And if these platforms allow him to stay, that may light a beacon attracting more questionable content creators.