Snapchat did beat earnings expectations with $262.3 million in revenue and a loss of $0.14, while Wall Street estimated an EPS loss of $0.17 with $249.8 million in revenue. Snap’s net loss decreased by 20 percent year-over-year, so it only destroyed $353 million this quarter compared to $385 million last quarter. Snap will have some extra cash to extend its runway despite its still-massive losses, thanks to a $250 million investment from Saudi Prince Al-Waleed Talal in exchange for a 2.3 percent stake in the company.

Snapchat gets $250M investment from Saudi prince for 2.3%

Despite its user count shrinking for the first time since its launch in 2011, the improvement to revenue (up 44 percent year-over-year) and reduced losses led Wall Street to give Snap’s shares an immediate 11 percent pop in after-hours trading. But after dodging multiple questions about how it would improve revenues and when its optimized Android app would arrive, shares fell back to just below the day’s closing price of $13.12.

Snapchat is coming off a disastrous Q1 earnings with its slowest-ever user growth rate that led to a 24 percent plunge in its share price in May. But the company has been highly volatile, seeing a 37 percent boost in its share price after surprisingly positive Q4 2017 earnings. Now it’s proving that Facebook isn’t the only social network with growth troubles.

In hopes of distracting from the shrinking DAUs, Snapchat shared a monthly active user count for the first time: 100 million monthly active users in the U.S. and Canada. Snap says this is the highest it’s ever been, yet the reveal highlights that teens are as addicted to daily Snapchat use as they once were. DAUs are a much more accurate way of measuring engagement and ad revenue potential, as opening a single notification and never returning can still register someone as an MAU.

CEO Evan Spiegel blamed the DAU shrinkage on “a slightly lower frequency of use among our user base due to the disruption caused by our redesign.” But since, he believes “we have now addressed the biggest frustrations we’ve heard,” so he’s optimistic about future growth. On the other hand, he credits the redesign as producing an 8 percent increase in retention among users older than 35, demonstrating the new design is more obvious and well-labeled.

During the earnings call, Snap’s new CFO Tim Stone mentioned that it’s interested in monetizing every part of the app, including “communication.” That could foreshadow more ads in the messaging inbox beyond the sponsored lenses users can play with to send augmented reality Snaps to friends. Snap is also hoping that after a decline in ad prices as it moved to self-serve auctions, ad prices and revenue will climb.

One big bright point for Snap was that its average revenue per user in the Rest of World region grew 65 percent just this quarter to reach $0.96. Figuring out how to monetize these developing countries where buying power is lower will be key to the company’s outlook. Snap says it’s still working to re-engineer its Android app to boost performance and reduce churn, since that’s where most of its new users are coming in. 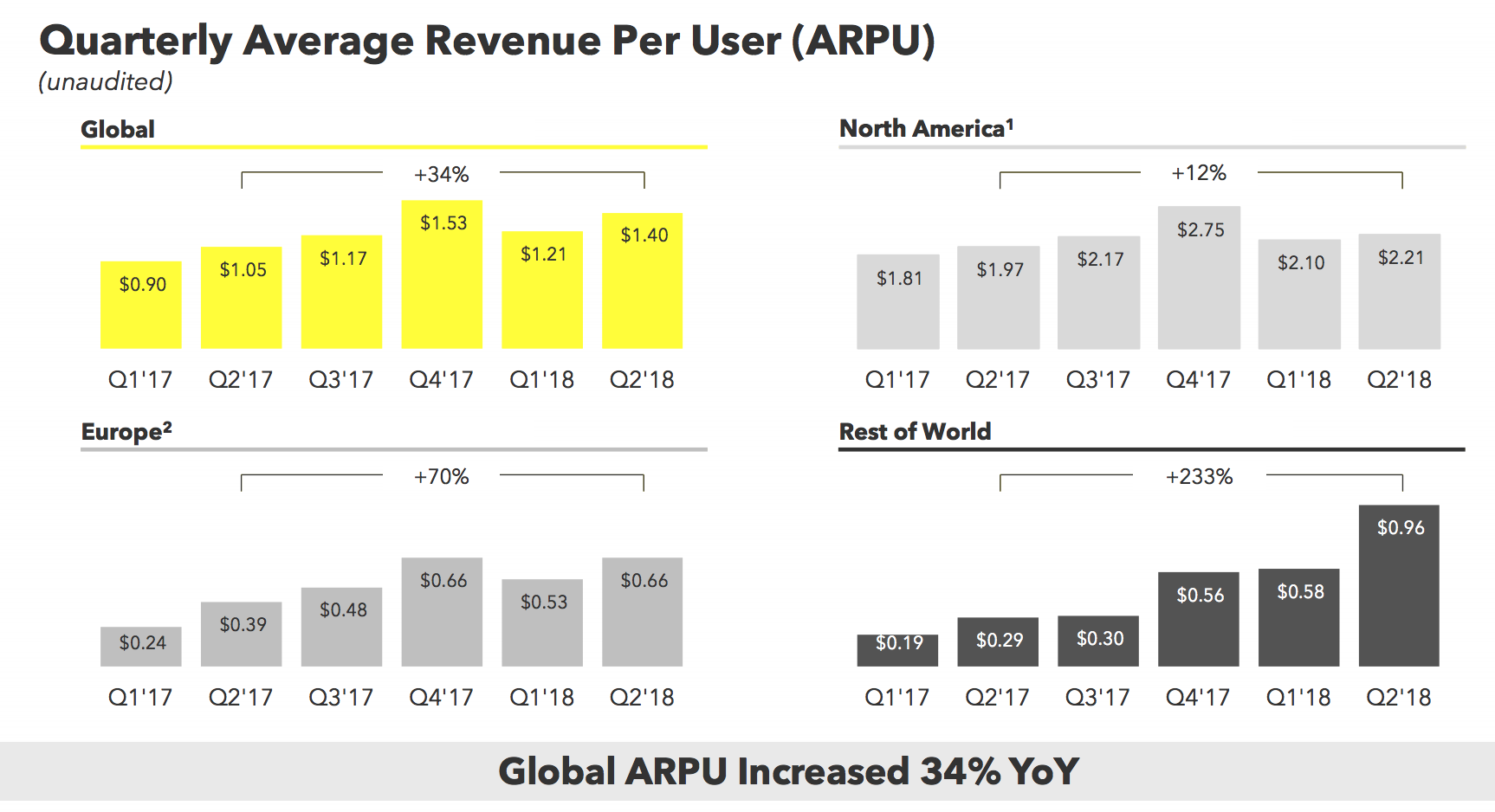 The quarter saw Snapchat escape much of the scrutiny facing other social networks regarding fake news and election interference. But it clearly still has issues with security, as Snapchat accidentally leaked its own source code, which was archived by someone who then posted it to GitHub today, though it was eventually taken down.

Snapchat started running un-skippable ads in its Shows, which could be a big money maker if extended to Stories. It began experimenting with e-commerce in earnest, allowing brands to sell things people can buy without leaving the app. It also opened self-serve buying of its augmented reality lens ads that people not only post, but play with for extended periods of time. And it launched its privacy-safe Snap Kit developer platform in hopes that alliances and referral traffic would help revive its user growth.

But problematically, its competitors like Instagram Stories continued to surge, with it now having 400 million daily Stories users and WhatsApp Status now having 450 million. Combined, Facebook has more than 1.1 billion daily (duplicated) Stories users across its family of apps. That reach could make it tough for Snap to compete for ad dollars. And with its user count actually decreasing, that could make for a grim future for the teen sensation.