Snapchat face-planted in its Q1 2018 earnings report amidst a rocky redesign and sustained competition from Facebook, unable to keep up its comeback from last quarter. Snapchat reached only 191 million daily active users, up from 187 million, with its growth rate sinking to 2.13 percent — its slowest ever, compared to 5.05 percent in Q4 and a disastrous 2.9 percent in Q3. It pulled in $230.7 million in revenue with an adjusted EPS loss of $0.17. That’s compared to Wall Street’s estimates of $244.5 million in revenue and an adjusted EPS loss of $0.16. 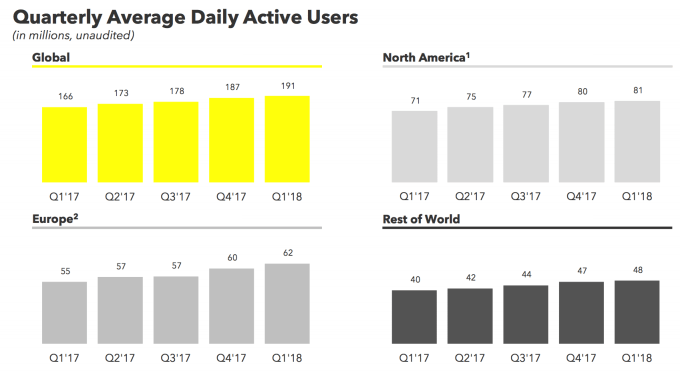 It seems that Snapchat’s sudden growth spurt last quarter was a fluke, with Snap adding just 1 million users in its core North American market this quarter. It’s actually worse than it looks. CEO Evan Spiegel wrote in his prepared remarks that compared to its 191 million users quarterly average, “our March average was lower, but still above our Q4 average.” The idea that Snapchat actually shrank last month should terrify investors.

Snapchat is going to have ongoing trouble significantly increasing its user count with over 300 million daily users on Instagram Stories, and 450 million on WhatsApp Status — both clones of Snapchat. Wall Street hates weak user growth, and Snap’s share price fell about 15 percent in after-hours trading to $12. 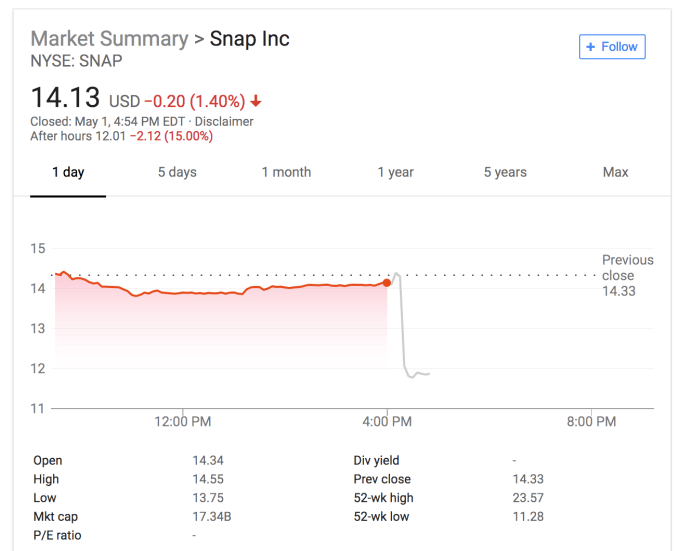 Snap’s losses grew to $385.7 million, up from $350 million last quarter. That’s another spot Snap was hoping to improve with cost-cutting layoffs, but those were too little too late. COO Imran Khan warned that “as we think about our year-over-year revenue growth rates, we are planning for our Q2 growth rate to decelerate substantially from Q1 levels.” That’s another reason investors are bolting.

One of the few bright spots of the earnings report was the reveal of Snap Pro For Busines and Creators. It’s an app for public figures and businesses to run their Snapchat presence. Khan wrote that the product will make it “easier to manage a public profile, create and distribute content, understand audience insights, and ultimately, advertise with us.” Rollout is still very early, though.

Snap also saw an unprecedented decline in its average revenue per user in North America. It’s standard for the holiday Q4 to rake in more cash than the following Q1. But Snap’s ARPU in the US and Canada slipped to $2.10, down from $2.75 in Q4, but also down from $2.17 in Q3. That indicates serious problems monetizing that could be due to fewer Stories or Discover ad views during Q1.

“Our redesign created some headwinds in our revenue this quarter by disrupting user behavior and creating some apprehension among our advertising partners” Spiegel admitted. That’s why Snapchat is now rolling out a big re-redesign that jams Stories into the Discover page, which still seems worse than the original design. What I think Snap needs is tabs for chronologically-sorted messages and relevancy-sorted Stories in the friends side of the app, and all professional content in the Discover section. 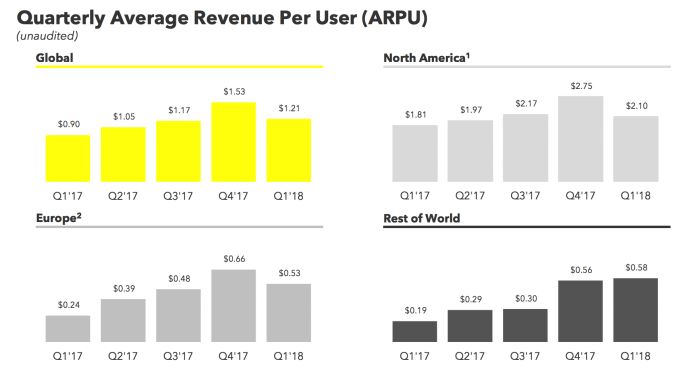 Snapchat spent the year’s first quarter trying to capitalize on Facebook’s Cambridge Analytica scandal while overhauling the design of its own app. Initial app store reviews were predominantly negative, but first-time installs and its App Store rank increased. Celebrity backlash and anecdotal declines in usage for some people have pushed Snap to waffle on the changes, in some cases changing the app to work more like the old version.

Snap just launched version 2 of its Spectacles camera sunglasses, but we’ll have to wait until next quarter to see any revenue from that. The question will be whether Snapchat’s layoffs of over 120 staffers will start to make a dent in its big losses, because it certainly didn’t show up this quarter.

During the call, Spiegel said he’s hoping that separating creators from friends will help Snap build an audience for them so they make it the favored home for their content. But even if it improves creator discovery, it’s hard to compete with the sheer size of Instagram and WhatsApp. CFO Drew Volero meanwhile said that Snap is trying to get to break-even, but there’s no timeline for that/ Producing $385 million more in revenue per quarter is going to be a massive challenge without significant user growth, especially with reduced headcount from layoffs.

As I wrote early this year, “The popularity of Snapchat messaging amongst western teenagers means it won’t disappear overnight. But it may be time for it and the world to face the fact that Snapchat could be a world-changing product without ever becoming a world-dominating business.”

What is Snapchat, now that Story sharing has stopped growing?

Honestly, Snap is in serious trouble. Its slowest-ever growth rate, declining revenue per user, and expanding losses point to a company in crisis. Even if users eventually acclimate to the redesign, by then Instagram and WhatsApp will have soaked up much of Snap’s international growth opportunity. And with Spectacles 2 merely a good iteration rather than a revolution, and true augmented reality glasses still years away, it’s unclear what Snap could do to save itself.