As a result of the larger cord-cutting trend, more consumers are watching TV streamed over the internet. And the size of this streaming TV audience is rapidly growing. According to a new report from Conviva, out this morning, streaming TV content consumption has more than doubled over the last 12 months, and is continuing to accelerate, with streaming TV viewing hours up 115 percent in Q2 2018 compared with the same time last year.

But the metrics aren’t just up year-over-year because of this special event. When Conviva pulled out the views attributed to the World Cup, it still found that peak concurrency was up by 45 percent year-over-year, to reach 5.3 million concurrent plays. This occurred during another large sporting event – the 7th game of the NBA Western Conference Finals.

The report also indicated that North America remains the largest and fastest-growing audience for streaming TV. In this market, plays were up 124 percent and viewing hours were up 139 percent year-over-year, as of Q2.

Asia, for comparison’s sake, saw a 63 percent increase in plays but more modest growth in viewing hours at 22 percent year-over-year. Also of note, while China drives much of the traffic, it had one of the lowest percentages in terms of long-form content viewing at 8 percent, versus 14 percent for short-form, and 16 percent for live event viewing.

Different types of content is being viewed on different devices, the report found. Streaming TV, in general, is shifting away from PCs (24% of plays) to mobile devices (49% of plays), especially for short-form content. But connected TVs (51% of viewing hours) are favored for long-form content. This supports findings from individual streaming TV providers as well – for example, Hulu recently said that 78 percent of its viewing takes place in the living room.

The new research additionally supports earlier reports that put Roku in the lead of other TV platforms. According to Conviva, Roku accounted for 22 percent of all viewing hours on connected TVs, and 8 percent of all plays. Fire TV is the fastest growing, with a 140 percent increase year-over-year. 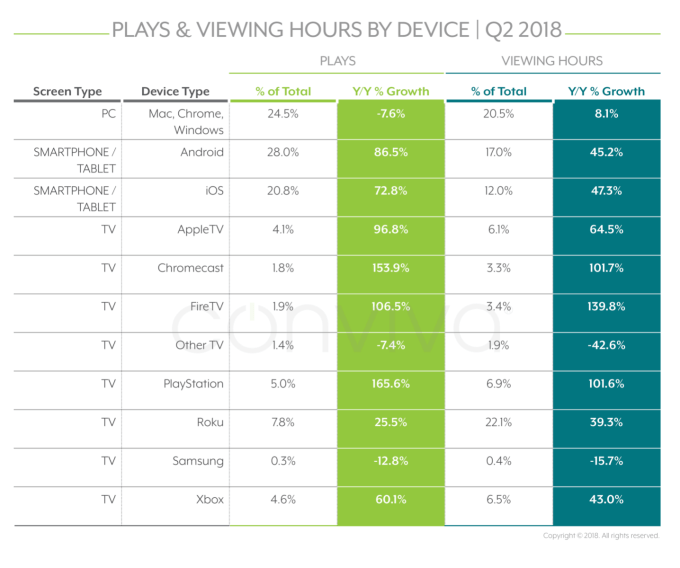 Other platforms – including Sony’s PlayStation, Google’s Chromecast, and Amazon’s Fire TV – all gained as well, and combined saw more than two times video consumption, versus the year-ago period. Some of their growth is coming from the decline of native TV platforms, like Samsung’s smart TV, as consumers shifted to Roku, Chromecast, and Fire TV.

The full report delves into the metrics in more detail, and includes stats on video quality, which is also increasing in North American and European markets.

Conviva’s customer base includes a large number of streaming TV, subscription video and other providers, including names like Hulu, Sky, Sling TV, HBO, AT&T, Playstation Vue, and many more.