Musical.ly has begun redirecting users of its Live.ly app, which it decided to kill off last month, to a competing app called LiveMe. Existing Live.ly users are being pointed to LiveMe through an in-app message, it says. While it’s a fairly common industry practice for companies to direct users to similar apps or services when a product of theirs is being sunsetted, in this case, Musical.ly’s decision to close down Live.ly and send users to LiveMe was actually a contractually obligated part of Musical.ly’s nearly $1 billion acquisition by Chinese technology company Bytedance last year.

A clause in Bytedance’s agreement to acquire Musical.ly stated that, if the deal went through, Musical.ly would have to close Live.ly within six months, according to a source with knowledge of the deal.

The agreement also said that Live.ly would have to point users to LiveMe for at least 30 days following its closure, we learned, when verifying the information. 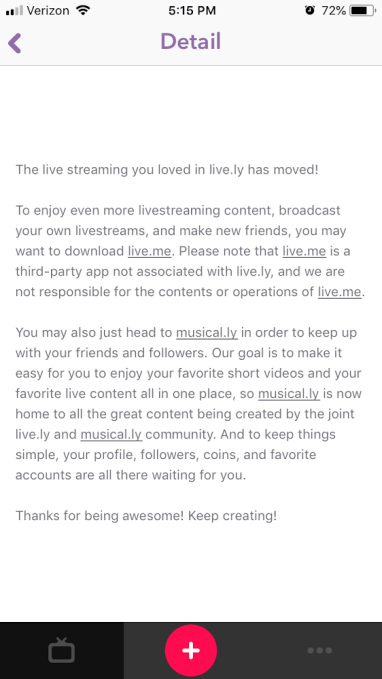 The issue at hand was a competing investment – right around the time of the Musical.ly acquisition, Bytedance had also put $50 million into the live-streaming app LiveMe. Apparently, it didn’t want to operate two rival properties.

Clearly, this request was not a deal-breaker for Musical.ly – in fact, it’s integrating Live.ly’s feature set into its own app. That means it will still be something of a competitor to LiveMe, though now no longer a direct one. Musical.ly’s main app, after all, is not known today for its live streaming, but rather for lip syncing videos that are recorded and edited using the app’s included visual effects and editing tools.

In addition, Live.ly had not been able to attract the viewership numbers that Musical.ly had. The company said, when confirming Live.ly’s closure last month, the majority of live stream views were taking place in Musical.ly itself, not in its spinoff.

That said, Live.ly had a fair number of users. Though nowhere near as big as Musical.ly’s 200+ million registered users or 60 million actives, its live stream app had 26 million installs, around 70 percent in the U.S., according to Sensor Tower’s data.

But LiveMe is bigger – it has more than 60 million users and has paid out over $30 million to its broadcasters through its direct virtual gifting program, the company claims.

LiveMe is also not the only app operated by the company. Other LiveMe portfolio apps include the social short video app Cheez, and mobile gaming and esports live streaming app Fluxr. To date, it has raised a total of $110 million. 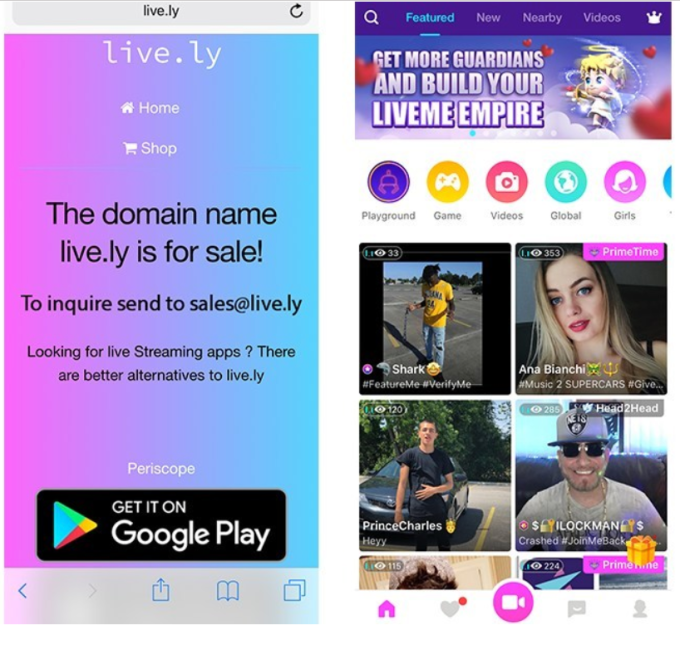 Live.ly isn’t only redirecting users to LiveMe, however. In its own announcement about the news today, it shows a screenshot that’s pointing Live.ly users to Twitter’s Periscope, for instance. The message also notes that the Live.ly domain name is for sale, and provides an email for sales inquiries.

Musical.ly hasn’t yet responded to a request for comment.