Musical.ly is merging the functionality from its two-year old live-streaming platform Live.ly into its main app, and has disabled Live.ly’s standalone app as part of the transition process. The Live.ly app will eventually be pulled from the App Store and Google Play, the company confirmed to TechCrunch. Instead of being able to go live, Live.ly users are presented with a message about the changes, informing them that live streaming has now moved over to Musical.ly. 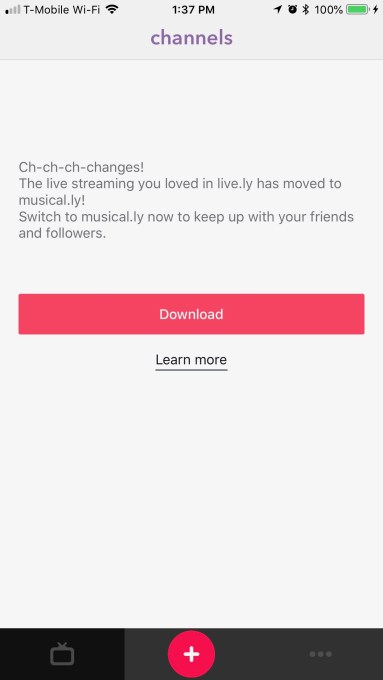 This change is also confirmed via Live.ly’s App Store update text, which says:

Live.ly is becoming part of musical.ly!
– You can go live on musical.ly right now! Plenty of live content there!

Live.ly first launched in May 2016, offering Musical.ly users a live-streaming platform, where the streams were directly viewable on Musical.ly, as well as within the Live.ly mobile app.

As the video creator streamed, they’d see a count of how many people were watching, and would see hearts float up across the screen when viewers “liked” their content — an experience that’s very similar to Twitter/Periscope and Facebook Live. Viewers could also chat with the streamer, and engage in real-time conversations.

Unfortunately for Live.ly users, there was little warning about the shut down, and it seems that, for some, live streaming on Musical.ly is not working as expected.

One regular Live.ly user posted to YouTube about the shutdown, complaining that after she made the switch to Musical.ly for her live stream as instructed, but no people were online watching and no likes and comments were showing up, either. This appears to be some sort of glitch, as viewers, likes, comments and other Live.ly core features are displaying for others who have been transitioned to the Musical.ly-based live-streaming experience.

Not everyone will be able to go live directly on Musical.ly today, as the addition of live-streaming support is a phased rollout.

However, the company says it remains committed to investing in live-streaming functionality, despite the Live.ly shutdown. We’re told that the majority of live-stream viewership was already taking place on Musical.ly’s main app, so it made sense for the company to consolidate the live video alongside the other short, lip sync videos Musical.ly is known for.

The closure of Live.ly is one of the first major changes to the Musical.ly product following its acquisition by Chinese media company Bytedance for up to $1 billion in November 2017.

Under its new ownership, Musical.ly launched a $50 million fund to help build out its creator community, but has also faced criticism for having poor content moderation capabilities — something that’s especially concerning given that a large part of its viewership audience is children.

The increased competition may have played a role in having Musical.ly consolidate its resources in order to focus on its flagship app, not its spinoff.

The main Musical.ly app has a reported 200 million registered users, 60 million of whom are active on a monthly basis.

Live.ly has been downloaded 26 million times to date, 87 percent on iOS. The U.S. accounts for about 70 percent of installs, according to data from Sensor Tower.