Got an odd screw, nut, bolt, washer or fastener you need to buy more of, but have no idea to how to find the right one? Amazon’s “Part Finder” can help. The company has rolled out a new feature on mobile that lets you point your camera at the item in question, so Amazon can scan it, match it, then direct you to matching items from its product catalog.

The feature is currently capable of identifying over 100 types of fasteners which represents thousands, if not millions of parts, Amazon says. It was built using technology developed by Partpic, a company Amazon acquired in 2016.

Partpic, based out of Atlanta, was co-founded by Jewel Burks and Jason Crain, and had raised a little over $2 million according to reports.

Amazon didn’t announce the feature’s launch, but confirmed to us it was rolled out to all users a couple of weeks ago, when we inquired.

The feature takes advantage of the iPhone’s camera to identify the object in question – a process it walks you through when you first launch “Part Finder” by tapping the Camera button next to the search box in the Amazon app.

This is the area where Amazon has added a number of product-finding functions that let consumers search for products without entering text. For example, here is where you’ll find the barcode scanner, the image recognition-based product search, package X-Ray, Smilecode scanner, AR View, and more. 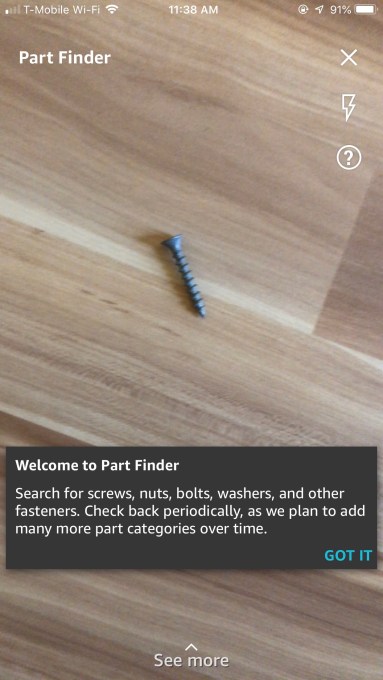 To use Part Finder, you first tap the icon to launch the feature, then place the object on a white surface next to a penny, as instructed. (A piece of white paper worked well.)

The instructions explain how to correctly tilt the phone in order to identify the part. This involves a display of a crosshairs and circle that appear on the white surface in the camera’s viewfinder. You tilt the phone until the circle is lined up in the center of the crosshairs.

Amazon’s app then scans the item and delivers results, assuming the product is in focus and you’ve followed the instructions properly. 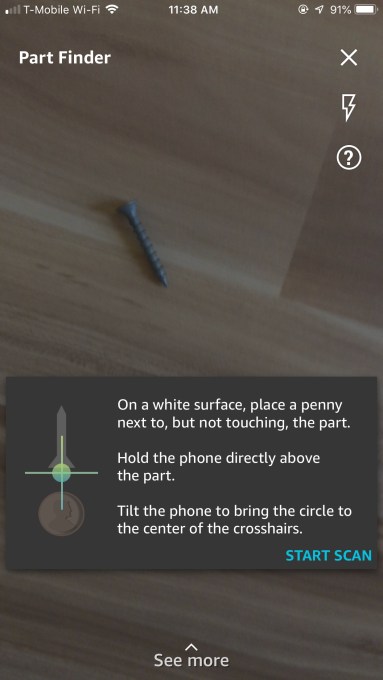 On the following screen, you add more information to help narrow down the results. For example, we scanned a screw and it asked for other details like whether it was a flat head and the drive type. (Some of this information could have been derived from the scan, one would think, so it’s not clear how much Amazon is relying on the scan itself versus user input here.)

Of course, a screw is an easier thing to find on Amazon. The feature will be a lot more handy when you’re stuck with an odd part that you don’t know how to identify. Unfortunately, we don’t currently have a bunch of unintended parts lying around to test. 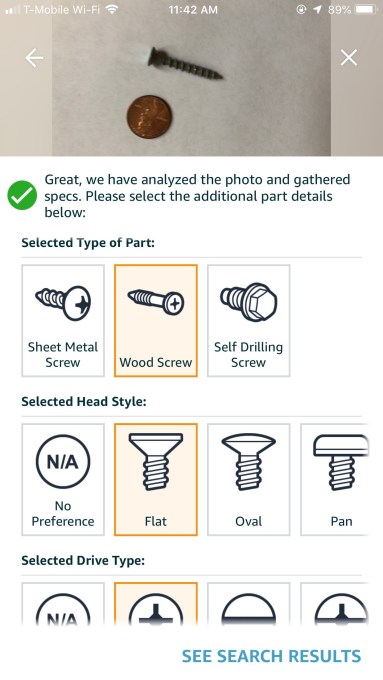 Part Finder is currently showing up in Amazon’s app on iOS. No word yet on its Android release.

The feature uses computer vision technology, not augmented reality, we’ve learned, to match parts. An earlier version of this post said otherwise. We’ve updated the article to reflect this. 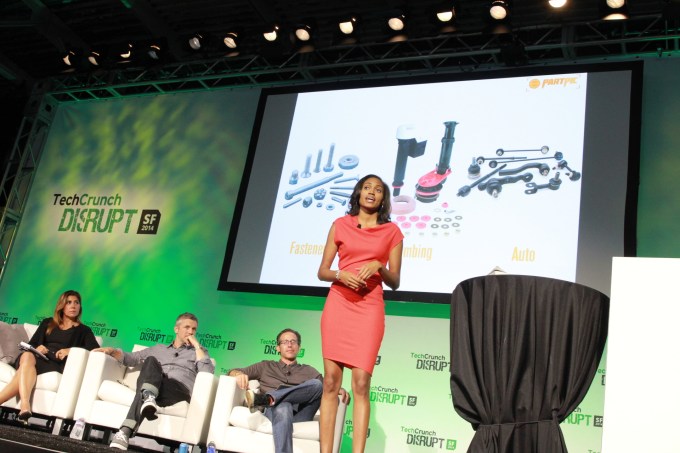 The technology that powers this comes from a startup called Partpic, which originally debuted at TechCrunch Disrupt 2014. Amazon acquired the company two years later, and brought co-founder Jewel Burks on board as team lead for visual search at A9.com.

While Amazon did confirm the feature, it didn’t credit the Partpic technology. TechCrunch learned of the news on Twitter, in fact, as the article circulated. (We updated.) Burks responded on Twitter to the outpouring of congratulations, crediting Nashlie Sephus with the engineering of the technology used here.

I so appreciated all the love today, but the real MVP is @nashlie_s, the brilliant mind who engineered Partpic’s computer vision algorithms and has helped me realize my vision. She’s amazing. #blackwomenintech #hiddenfigures