Moov, the wearable maker best known for its line of fitness trackers with their accompanying digital coaches, is today branching off into mindfulness. The company is the latest to join the self-care craze, with the launch of a new app focused on mindfulness and meditation, Sanity & Self. However, unlike most of today’s meditation apps, Sanity & Self is aimed only at women.

Explains Moov’s co-founder Meng Li, the idea to build a mindfulness app came to her after becoming a mother herself.

“Even with a wonderful and supportive partner, I found it incredibly challenging to find time to take care of myself after I had my first child,” she says. “I saw other women around me struggling as well, and wanted to build an app specifically geared toward helping women and moms find time to recharge themselves.”

Women — and especially mothers — often find themselves stressed, tired and with little or no time to themselves. And instead of fathers being told to step up already and take on their fair share of parenting duties, women are just chastised for not “leaning in” more at work. “Studies show that half of us have lain awake at night within the last month because of stress,” notes Li. “Women are more stressed than men, and moms often bear more of the burden of childcare than fathers. In fact, moms have as little as 17 minutes a day to themselves.”

Then there are the general stressors associated with our always-on culture. Technology, in particular, has enabled a blurring of lines between work and personal time to the point that many people feel they’re never really “off the clock.” (Until some point at which they burn out and quit, that is.)

Mindfulness apps have more recently stepped in to help address the problems that, ironically, technology helped to create.

The Sanity & Self app initially starts you off in a chatbot-style interface, though there’s a way to exit this experience to use the app normally. It’s an interesting idea in terms of not overwhelming new users with content, but it’s also frustrating — as chatbots are — because you can’t fully explore the app through back and forth texting. However, once you bypass the bot (and you should), the app itself has a variety of sessions from which to choose. These are organized as colorful photo thumbnails under categories like Breathe, Meditate, Listen&Grow, Journal, and more.

There are also sessions related to massage and beauty, which is unusual for a mindfulness app, but features its female audience may like; as well as a section with audio cues for fitness training.

We asked Moov if it had repurposed materials from its existing digital coaching platforms for the new app. The company replied that some of the fitness content appeared briefly in an experimental Moov Studio app, but that’s been discontinued. The rest is new. 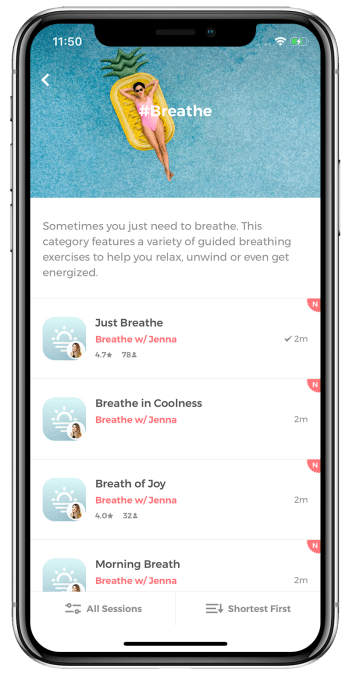 The app features an in-app community page, too, which is an interesting idea in terms of building up a social network for women. The questions and answers have been clearly pre-seeded ahead of the app’s launch, with a focus on beauty, self-care, stress reduction, fitness and other related topics to help set the tone. 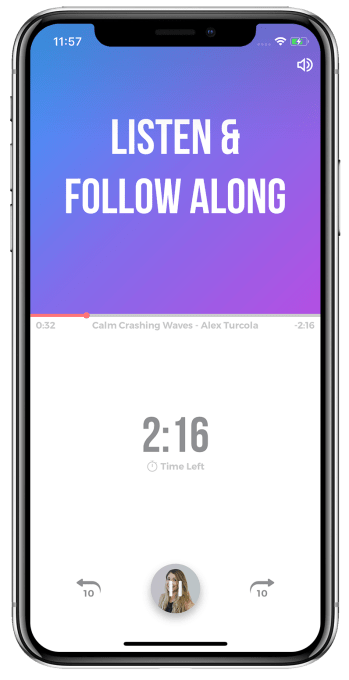 Of course, if the app scales to support a larger number of users, Moov will need to concern itself with content moderation and managing spam. For now, the feeling is one of supportive communication, however.

The app itself is a freemium product. Upgrading to the $9.99/month Premium subscription gives you access to the full Premium session library, new sessions weekly and support for offline access. While there’s a good amount of content for the money, the pricing — nearly as much as Netflix — will require that you’re a regular user to get value for your money.

And with only 17 minutes a day to spare… well…

Sanity & Self’s launch is Moov’s first serious attempt at moving away from a devices business, supported by software, to a software-as-a-service business. But it says the other products remain unchanged; this is merely an expansion.

“We want this app to be more focused on overall wellness and self-care. We also want it to be accessible to everyone, whether or not they have a wearable,” says Li.

Sanity & Self is a free download on Apple’s App Store.