For over 50 years, Disneyland and its sister parks have been a showcase for increasingly technically proficient versions of its “animatronic” characters. First pneumatic and hydraulic, and more recently fully electronic, these figures create a feeling of life and emotion inside rides and attractions, in shows and, increasingly, in interactive ways throughout the parks.

The machines they’re creating are becoming more active and mobile in order to better represent the wildly physical nature of the characters they portray within the expanding Disney universe. And a recent addition to the pantheon could change the way that characters move throughout the parks and influence how we think about mobile robots at large.

I wrote recently about the new tack Disney was taking with self-contained characters that felt more flexible, interactive and, well, alive than “static,” pre-programmed animatronics. That has done a lot to add to the convincing nature of what is essentially a very limited robot.

Traditionally, most animatronic figures cannot move from where they sit or stand and are pre-built to exacting show specifications. The design and programming phases of the show are closely related, so that the hero characters are efficient and durable enough to run hundreds of times a day, every day, for years.

The Na’vi Shaman from Pandora: The World of Avatar, at Walt Disney World, represents the state of the art of this kind of figure.

However, with the expanded universe of Disney properties including more and more dynamic and heroic figures by the year, it makes sense that they’d want to explore ways of making the robots that represent those properties in the parks more believable and active.

That’s where the Stuntronics project comes in. Built out of a research experiment called Stickman, which we covered a few months ago, Stuntronics are autonomous, self-correcting aerial performers that make on-the-go corrections to nail high-flying stunts every time. Basically robotic stuntpeople, hence the name.

I spoke to Tony Dohi, Principal R&D Imagineer and Morgan Pope, Associate Research Scientist at Disney, about the project.

So they came up with the concept of a stunt double for the ‘hero’ animatronic figures that could take their place within a show or scene to perform more aggressive maneuvering, much in the same way a double replaces a valuable and delicate actor in a dangerous scene.

The Stuntronics robot features on-board accelerometer and gyroscope arrays supported by laser range finding. In its current form, it’s humanoid, taking on the size and shape of a performer that could easily be imagined clothed in the costume of, say, one of The Incredibles, or someone on the Marvel roster. The bot is able to be slung from the end of a wire to fly through the air, controlling its pose, rotation and center of mass to not only land aerial tricks correctly but to do them on target while holding heroic poses in midair.

One use of this could be mid-show in an attraction. For relatively static shots, hero animatronics like the Shaman or new figures Imagineering is constantly working on could provide nuanced performances of face and figure. Then, a transition to a scene that requires dramatic, un-fettered action and boom, a Stuntronics double could fly across the space on its own, calculating trajectories and striking poses with its on-board hardware, hitting a target dead on every time. Queue re-set for the next audience.

This focus on creating scenarios where animatronics feel more ‘real’ and dynamic is at work in other areas of Imagineering as well, with autonomous rolling robots and — some day — the holy grail of bipedal walking robots. But Stuntronics fills one specific gap in the repertoire of a standard Animatronic figure — the ability to convince you it can be a being of action and dynamism.

“So often our robots are in the uncanny valley where you got a lot of function, but it still doesn’t look quite right. And I think here the opposite is true,” says Pope. “When you’re flying through the air, you can have a little bit of function and you can produce a lot of stuff that looks pretty good, because of this really neat physics opportunity — you’ve got these beautiful kinds of parabolas and sine waves that just kind of fall out of rotating and spinning through the air in ways that are hard for people to predict, but that look fantastic.” 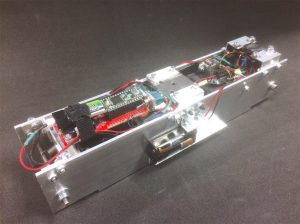 Like many of the solutions Imagineering comes up with for its problems, Stuntronics started out as a research project without a real purpose. In this case, it was called BRICK (Binary Robotic Inertially Controlled bricK). Basically, a metal brick with sensors and the ability to change its center of mass to control its spin to hit a precise orientation at a precise height – to ‘stick the landing’ every time.

From the initial BRICK, Disney moved on to Stickman, an articulated version of the device that could now more aggressively control the rotation and orientation of the device. Combined with some laser rangefinders you had the bones of something that, if you squint, could emulate a ‘human’ acrobat.

“Morgan and I got together and said, maybe there’s something here, we’re not really sure. But let’s poke at it in a bunch of different directions and see what comes out of it,” says Dohi.

But the Stickman didn’t stick for long.

“But it has been so much fun. Every step of the way I think oh, this is blowing my mind. But, they just keep pushing…so it’s nice to have that challenge.”

This process has always been one of the fascinating things to me about the way that Imagineering works as a whole. You have people who are enabled by management and internal structure to spool out the threads of a problem, even though you’re not really sure what’s going to come out of it. The biggest companies on the planet have similar R&D departments in place — though the ones that make a habit of disconnecting them from a balance sheet, like Apple, are few and far between in my experience. Typically, so much of R&D is tied so tightly to a profit/loss spreadsheet that it’s really, really difficult to susurate something enough to see what comes of it.

The ability to kind of have vastly different specialities like math, physics, art and design to be able to put ideas on the table and sift through them and say hey, we have this storytelling problem on one hand and this research project on the other. If we drill down on this a bit more, would this serve the purpose? As long as the storytelling always remains the North Star then you end up having a guiding light to drag you through the pile and you come out the other end, holding a couple of things that could be coupled to solve a problem.

“We’re set up to do the really high-risk stuff that you don’t know is going to be successful or not, because you don’t know if there’s going to be a direct application of what you’re doing,” says Dohi. “But you just have a hunch that there might be something there, and they give us a long leash, and they let us explore the possibilities and the space around just an idea, which is really quite a privilege. It’s one of the reasons why I love this place.”

This process of play and iteration and pursuit of a goal of storytelling pops up again and again with Imagineering. It’s really a cluster of very smart people across a broad spectrum of disciplines that are governed by a central nervous system of leaders, such as Jon Snoddy, the head of Walt Disney Imagineering R&D, who help to connect the dots between the research side and the other areas of Imagineering that deal with the parks or interactive projects or the digital division.

There’s an economy and lack of ego to the organization that enables exploration without wastefulness and organically curtails the pursuit of things not in service to the story. In my time exploring the workings of Imagineering I’ve often found that there is a significant disconnect between how fascinating the process is and how well the organization communicates the cleverness of its solutions.

The Disney Research white papers are certainly infinitely fascinating to people interested in emerging tech, but the points of integration between the research and the practical applications in the parks often remain unexplored. Still, they’re getting better at understanding when they’ve really got something they feel is killer and thinking about better ways to communicate that to the world.

Indeed, near the end of our conversation, Dohi says he’s come up with a solid sound bite and I have him give me his best pitch.

“One of our goals of Stuntronics is to see if we can leap across the uncanny valley.”