The process of making a Disney park feel alive is most easily encapsulated in animatronic figures. These hydraulic, pneumatic and now electric figures have been a fixture at Disneyland since the 60s. Since then, massive advancements have been made in control systems, movement architecture and programming. The most advanced animatronic figures like the Na’Vi Shaman in Disney World’s Na’vi River Journey are plain and simply robots. And very sophisticated ones at that.

But not every animatronic in the parks can be a simple pneumatic connected to a bulky master system or a highly advanced and complex robotic masterwork. That’s where the Vyloo come in.

Begun as a project to help populate the park with more interactive elements, the Vyloo are three small alien creatures in a self-contained pod that renders them autonomous. They have moods, interact with guests through non-verbal gestures and cues and are powered by a completely onboard system that can be tuned quickly and left to do its thing.

“What we pitched was a project to try to bring small autonomous animatronic creatures to life. We were really interested in the idea of creating some little guys that could truly respond to and interact with guests,” says Leslie Evans, Senior R&D Imagineer at Disney. She and Alexis Wieland, Executive R&D Imagineer, started the project with the goals to create something that was autonomous, but also created a reaction in the guests that felt like a real emotional relationship. They needed to have a “spectrum of personalities” and then a set of tools that would allow them to dial those attributes up and down before setting them loose on guests.

“I think that a lot of this was coming out of this desire to start thinking about animatronics as actors, so being able to say we want these characters to be shy, we want them to be outgoing ‑‑ trying to define them in terms of personality ‑‑ and then translating all of that into the technical tools that we need to bring the characters to life,” says Evans.

I first saw the Vyloo, then informally called ‘Tiny Life’, on a tour with a Girls Who Code group a year ago. At the time they looked fairly similar, if more ‘plain’. The basic unit is a log with three small creatures, now known as Vyloo, sitting on top of it. The creatures are outfitted with sensors and cameras and the ancillary equipment that allows them to run is completely contained inside their bodies or the log structure. This allows the Vyloo to be incredibly modular. This is unlike most robots in the park, which require attachment to external auxiliary systems that control or manipulate them.

The project had gotten to the point of being able to demo it to groups like the GWC class when the serendipity that happens at Imagineering often kicked in.

“One of the guys from our department had been working on “Guardians of the Galaxy – Mission: BREAKOUT!,” and he was like, “Hey, guys, you really need to come to R&D and see these creatures. I think it would be the perfect thing for the first scene, that queue line in the collector’s collection room,” says Evans.

This interplay between what Imagineering is experimenting with and what gets put in the parks is one of the things that makes the unit such a unique robotics lab. Many times off the shelf parts like Kinect sensors are grabbed and fit to the task, other times specific parts, components or even materials have to be invented and manufactured. Whatever technical hurdles are being overcome are always in service of the story, but the way that they may be put to use isn’t always known at the outset.

The goal of having autonomous robotic units that can easily be placed throughout the parks to create a richer, more interactive environments was half of the goal, and it worked well with the Mission Breakout scene, which features creatures and objects collected by…The Collector, natch. But that was only part of the goal with the project.

“Our characters right now give very polished, perfect performances, but they really are a loop in the sense that they don’t really respond to the guests, so bringing the characters down so they know the guests are there and actually respond appropriately,” says Wieland. “To stay in character is a big part of what we were trying to pull off here, and so moving in that direction is a big part of it. How do we make our characters more visceral in the moment with the guests?”

To that end, the Vyloo are programmed initially with a range of motions and actions they can take – squishing and stretching, cocking their heads, moving their necks around. These actions are then given over to a program that takes in signals from guests by tracking whether they’re looking at them, listening to the guests talk to the Vyloo while they’re staring at their cage and following them with their gaze when they move.

The next phase, which is what the Mission Breakout test is all about, was to learn how the guests interacted with the creatures.

“As we watched them in the park, there’s something really magical about when one of these creatures looks at you. It’s enabling guests to play with our animatronics in a new way that we haven’t seen before, and I think the response to that has been very positive and super exciting that people are playing with these guys,” says Evans.

And those interactions include many things that the team never dreamed of.

“The one which blows me away… [is] guests do these kissy ‘faces and stick their tongues out at them constantly. This is like, “oh, I hadn’t even thought of that,”” says Alexis. “They’re doing interactions that never occurred to me, and that’s part of the reason we’re doing this. It’s fantastic. One of the things we see all the time is people play with them and interact with them. That’s fun, and then they take a step to leave, and it keeps watching them. You see them stop, and move back, and they’re like, ‘oh my God.’”

“It’s really wonderful when that light bulb goes off…the kids get it much quicker than the adults do,” he adds.

To tune those reactions, the team created a sort of game controller on steroids, featuring knobs and sliders that allow them to tune their “attitudes” and awareness. They can be feisty or chill; more interactive or less; hyper or sleepy. Once the tuning is done, they’re set loose on the guests again. 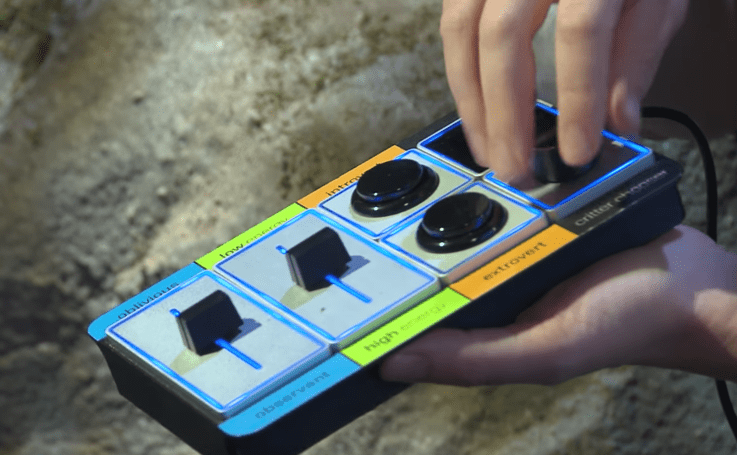 “When we saw the prototypes at Imagineering R&D Headquarters we were all blown away. Such fantastic creations. The colors were a little too muted for the Guardians of the Galaxy world though, so we tweaked the design and made them a little more flamboyant to fit the Guardians aesthetic. Then I got to name them! I love the Vyloos and would love nothing more than to have one as a pet!”

All of this started off with a bright yellow puppet that Evans describes as ‘dirt-simple’ and made of spare fur and wooden rods, but still says was “cute”.

“With the puppet, we worked with a puppeteer here who’s unbelievably talented and really helped give this project life in a way that can’t be understated. He was critical to the success. We did hours of study with this thing where we would say, “How do you say hi if you’re really shy, but you’re also kind of curious?” We would record all of these motions that we did with the puppet. A lot of times we’d start off in this very analog way. It helps us get a bunch of creative intent defined quickly.

Suddenly, we have all this footage of all of these different personalities. How would they say hi? How do they get surprised? What do they do if you walk away from them? From that, we started to tease out, “This is a ton of data. How do we simplify this down into a prototype system that we could build to try to show the power of some of these simple interactions?” ‑‑ saying hi, what happens when you leave, what happens when you get startled, if there’s animatronics around you, how do I feel about my friends?

We did a huge pass at defining a wide range of that, and then from there, pared down. “What’s the critical stuff that we really need for this first minimum viable product, a kind of animatronic that we’d put out in the first pass?”

From there, the emotional shorthand was fit into as simple a set of gestures as possible to limit the complexity of the creatures. One of the most effective of these is what the team refers to as the ‘squash and stretch’ — the act of pushing its head down into its body to squish or craning the neck to stretch out. This simple action took the place of a lot of emotional cues that humans use like eyebrows or facial muscles.

Once the Vyloo made it into the queue, there were changes to be made too to compensate for the loudness of the environment, the relative attentiveness or lack thereof of the guests and more.

As with every project that makes it out of Imagineering, the primary goal of the Vyloo and the creatures that will come after it is to crank up the delight factor of guests to Disney’s various parks. As a component of that, the robots that Disney is building need to become more interactive and able to be viewed from close up, with convincing interchanges of emotion and communication.

The future of robotics at Disney is thick with emotional context, autonomy and interactivity. It’s focusing incredibly heavily on the emotional quotient of robots, rather than seeking pure efficiencies. But at the same time it needs to make robots that withstand incredible scrutiny from millions of visitors, are robust enough to operate with near perfect uptime 14 hours a day all year long for years.

It’s this unique blend of disciplines that are all driven by an ego-light ‘whatever it takes’ mentality that make it one of the most exciting robotics labs in the world. The Vyloo are a relatively low-key addition to the arsenal of attractions in the park, but they telegraph a great amount of cool things to come for Disney fans, as well as some overall learnings for the robotics industry about the power of emotion and interactivity in increasing efficiency and coexistence with robots.